Rachel and Tiff had the wonderful idea of starting something new every weekend in November and called it "Naughty November".  I did like the idea of joining in but didn't want to add any WIPs to my total.  I want to be down to 15 or fewer by the end of the year.

I'll only show the stitched picture here and save the FFO for Rachel's other SAL, the FFO Gallery.

This is from the Just Cross Stitch Ornament Special 2019 and was the September choice for the JCS FB group.  Silvery Lace Snowflake from Works by ABC.  Or Golden Lace Ornament as it now is: 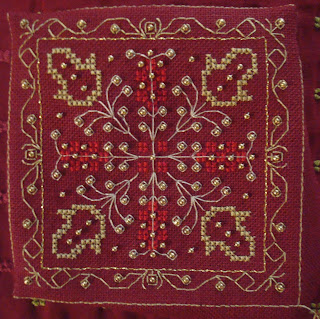 stitched on 32 count Burgundy linen
on the backing fabric for the ornament: 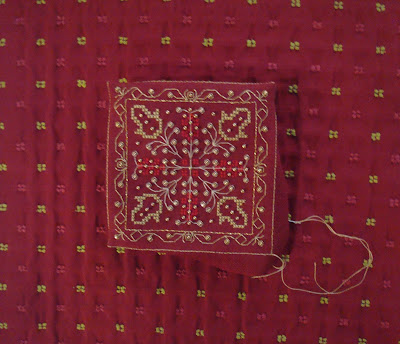 A while back I started the Teresa Wentzler Byzantine Ornaments on this fabric.  I stitched three of them and kept all the threads in a bag with the stitched pieces and the fabric for the remaining three.  There was plenty of fabric to make at least four of Works by ABC's designs.  She has only done three so far but there may be more.
Here's the photo from the magazine so you can see how different it looks! 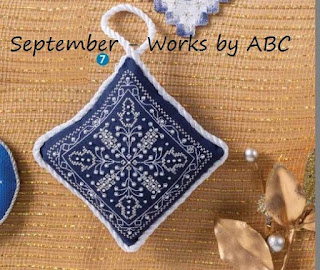 Here's my pie for November: 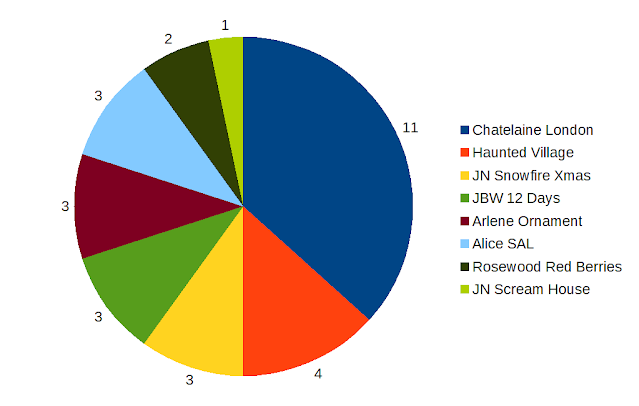 Everything else has been shown at least once except for my current progress on Snowfire Christmas by Just Nan: 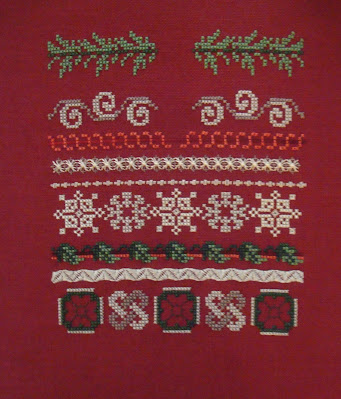 stitched on 32 count Burgundy Linen
(the same linen as the ornament above!)
How did my spending go in November?  Much better than in October!  The only things I bought were right at the start of the month.  I wanted the 2020 Just Cross Stitch Ornament Special and ordered the new Nora Corbett ClockHouse to go with it.

Finally, the Advent Calendar Blog Hop starts tomorrow!  This is the Tenth year of hosting the calendar so I am very excited to see what everyone will be sharing with us.  The post will go up tomorrow afternoon and we will open the first door when the first person makes their blog post.

Posted by Jo who can't think of a clever nickname at 19:37

Naughty November was fun to see what everyone was working on.
Silvery Lace is beautiful.
I do like the burgundy fabric such a beautiful color.
Merry Christmas

That's a beautiful ornament, and the color is so pretty with the beads.

Beautiful finish! Love the backing fabric too. I still just love that burgundy fabric with the band sampler. Just a beautiful piece.

Oh, how gorgeous is your Golden Lace ornie, and how different it looks in your burgandy/gold colours compared to the blue/silver. There's definitely been a burgandy theme recently! Thanks for taking part in Naughty November, and putting most of us to shame by choosing sensible quick projects! :)

I love both of these pieces, especially on the Burgundy fabric.

Your Golden Lace Ornament is a terrific example of how much difference the fabric and thread can make to a design. I love your version.

You do have a thing for bold fabrics, and you use them to great effect! Well done on finishing that ornament.