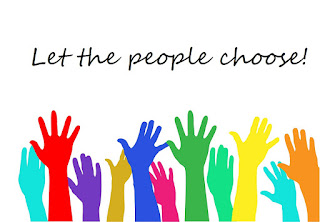 This SAL is all about what you want to see on the blog.  Each month I ask for suggestions for themes and then put them up to the members of the IHSW Group on FB to vote for their choice.  This is what they have chosen:
December - Stitching Disasters
January - Designer of the Year 2020
February - To Be Advised
Before we start, the January theme will be the Designer you most enjoyed stitching in 2020, a nice way to recap the year.
Now, disasters, hopefully a story of Triumph Over Tragedy!  We've probably all had our share of projects that didn't quite work out; where we cut our fabric too small, started with it in the wrong alignment, used the wrong colour or simply couldn't count at all.
Probably the worst disaster I had was a piece of whitework I was stitching as a Pearl Wedding Anniversary gift.  I put it down next to my chair and the friend who was sitting the other side had a muscle spasm and spilled their drink over it.  Coca-cola.  No, Coke does not wash out easily.  And when I washed the piece, the colours in the delicate hand-dyed thread washed out too.

No choice but to use it as a practise piece and start again.   No photos exist of this disaster as it was pre-blogging days.
The visit from the frog is one disaster all of us are familiar with.  For those new to stitching, we call the act of removing stitches "frogging" because we rip-it, rip-it.  The French say "to do a Penelope" after the Greek Myth of Odysseus' wife who removed each day's progress to avoid having to remarry when Odysseus did not return from the Trojan War.
This beautiful project was probably my worst and most prolonged visit from the frog.  I usually try to fudge errors but that simply wasn't possible with this design.  This is what I wrote back in 2014:

"After stitching the border to the left of the reindeer I moved onto this border and reached the bottom of the left hand piece (I started from the same level as the right hand part to give you an idea of how much I stitched).  When I reached the bottom I was about to turn left when I noticed the bottom motif was the wrong size.  Oops, unpick.  Then I noticed that the five times it occurs (ringed in red) it is charted in different sizes!!  Four stitches wide at the top and bottom and five stitches wide for the other three.  Whereas mine were 4,4,4,5,5 which resulted in being one stitch too short at the end.  Unfortunately the corner design at the bottom echoes the corner design at the top so there was no way I could rechart or somehow fudge it.  And believe me, I tried!" 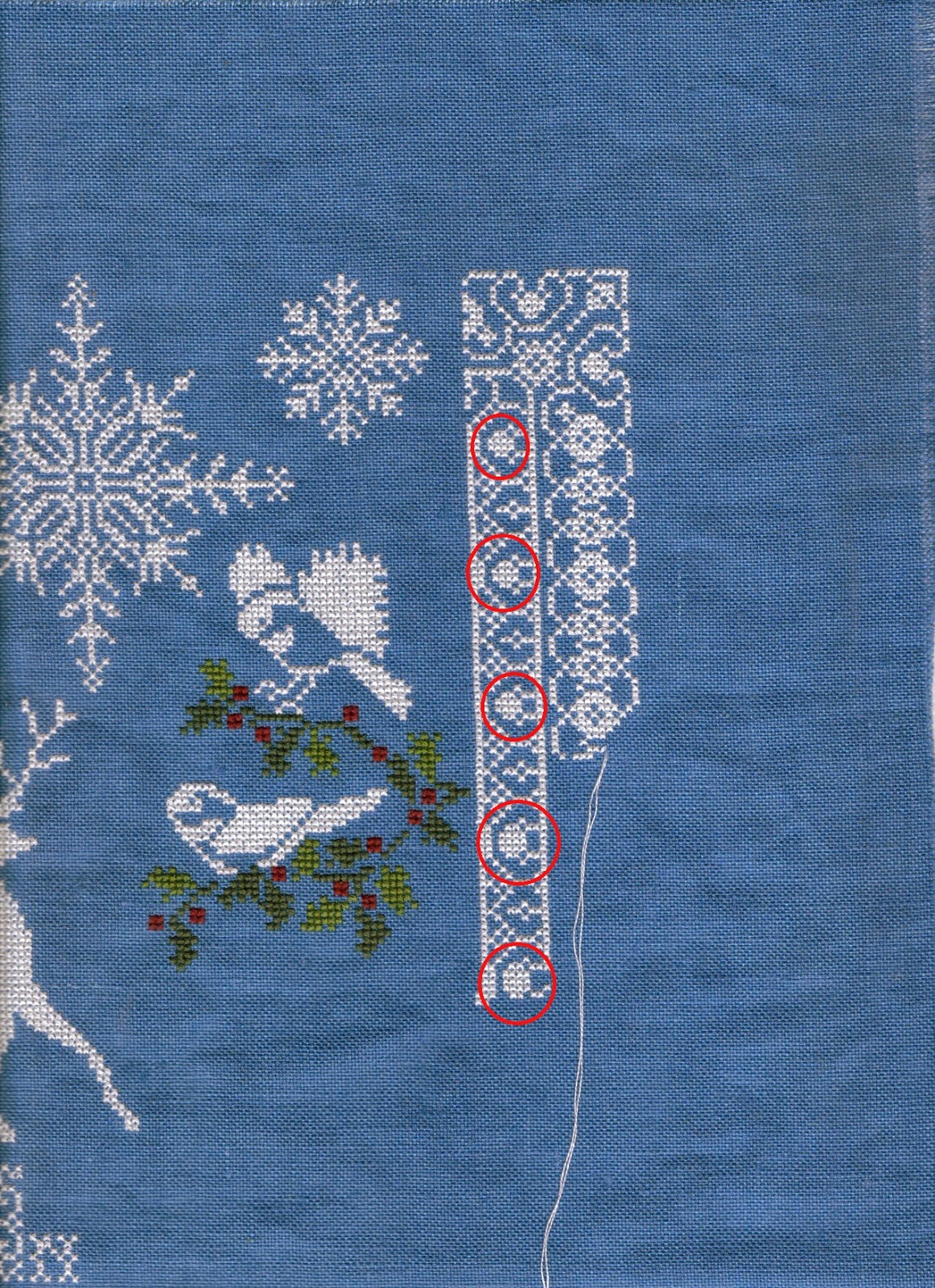 I did restitch it all and the piece now comes out every Christmas to be proudly displayed: 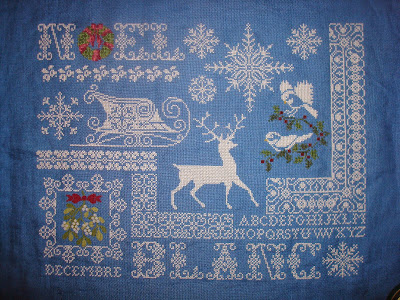 A Mon Ami Pierre - Noel Blanc
Kerry in Stitches did a tag on her FlossTube about this subject, here are her questions:
1. Have you ever had Fabric too small? At what point did you realise?
A: No.  I like a tight margin but I can do maths and always double check.

2. Have you had a Flossident? Coffee incident where you’ve dropped thy floss in your drink or colour run when washing
A: Yes, see above!

3. Have you ever cut a hole in your fabric by accident?
A: No.  I have removed large slubs and rewoven a piece in to replace it.

4. Have you ever ruined a chart, how?
A: No, I make working copies of most larger charts
5. Have you ever brought a chart twice?
A: No, too organised and too careful with my money to do that!

6. Have you had a bad ffo? Was it salvageable?
A: My first couple of pillow finishes were not good and I unpicked one later on and scrapbooked it.  Tip - stuff them fuller.
7. Are you a Floss licker?
A: Yes!
8. Do you follow the chart for back stitch or wing it?
A: Generally I follow the chart.
9. Used scissors for something other than fabric or floss
A: Never although certain other people do and I have to repurpose the scissors.  Our nail scissors were previously a pair of stork embroidery scissors someone used as a screwdriver and broke the tip.

10. Put your Needle in mouth or clothes instead of needleminder?
A: Holding the needle in my mouth is probably my worst habit.
11. Eating whilst stitching?
A: I try to avoid that.
12. Done a thread conversion, not written it down and then forgotten what colour was for where.
A: Not while I am actually stitching but sometimes when it is finished and I want to put the details in my blog.
13. Have you ever mislaid a cross stitch piece? Did you find it and if so where did you put it for safe keeping?
A:  I have done that a few time, put the piece away, bought a frame, can't find the piece.  Put the frame in a safe place.  Find the piece, can't find the frame!  Usually it's because I have three separate places to stores things instead of one craft room.
14. Have you ever underplayed your recent stash purchases?
A:  No, Stitch from Stash helps me keep honest about my spending,
15. Have you ever avoided counting your wips because you’re afraid of the number
A: Nope, I keep a spreadsheet and like seeing exactly how many I have.
16. Have you found things in your stash you forgot you had.
A: Yes, usually things I have been gifted and left in the envelope with the card instead of putting into my storage system.
17. Orientated fabric wrong when starting?
A: No.  But I have used fabric which is an unevenweave and turned out taller than it was wide!

Now it's over to you.  All you have to do is make a post on the theme of Stitching Disasters, mention The People's Choice SAL (you can copy the picture I used at the top of this post and in my side bar) and my blog. Please link up using the URL of the actual blog post, not the home page of your blog. I look forward to seeing what you all post.
*
*
Finally, I need your suggestions for the next poll.  Any thing, no matter how obscure, weird or random will go into the poll.  Keep the theme suggestions to a single word or two - so you could have Cats, or Blue, or Holidays, or Warmth etc.  Really anything which could be illustrated in cross stitch.

Posted by Jo who can't think of a clever nickname at 19:49

Oh Crumblejets! I misread your instructions and entered the name of blog not post. I haven't posted the disaster yet, but will when I get home. I'm leaving in a couple of minutes.

Frogging a large amount of delicate stitching must have been a horrible thing to do, but at least you were able to correct the error. Unlike your poor Whitework; you must have been so upset.
I'm with you on counting and measuring multiple times before cutting etc. - *some* disasters are easy to avoid.
Thanks for hosting! :)

This was most enlightening!

I have Noel Blanc in my stash and every year I plan to do it but not yet! I like your colour choices.

You are so patient and persevering to overcome your border disaster! This piece is lovely and the memories of stitching it must make it extra special to see and know you stuck with it! The questionnaire was fun. Thank you Jo!

Oh! I had a suggestion for People's Choice, even though I don't participate a lot maybe "Pink" "Patterns" and for one really random idea, and I'm not sure how to word it succinctly, what about obligation or kindness (?) stitches-things we stitched because someone asked us to or because we thought someone would like it, not because we wanted to or because it was our usual style? Maybe stitches we did that were sort of the opposite of what we normally choose for ourselves?

It's a great topic, but a bit painfull to read about everyone's experiences!