This idea was cooked up by Rachel and Tiff in order to add some excitement to November.  Because who doesn't need some new starts just as we come to the close of the year and are trying to finish projects?

I was so undecided what to stitch to join in with this - four Hallowe'en, four Christmas, four Just Nan, four random freebies??  Four BAPs to get a head start on 21 in '21?

In the end I decided I didn't want to add to my total number of WIPs this year which meant stitching something I could finish in a weekend.  Something small.  Something tiny.  Three tiny things in the end! 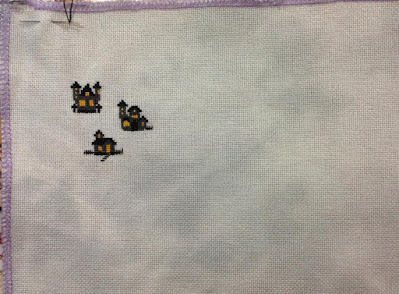 stitched over one on 28 count Moondust Murano from Crafty Kitten
I've been helping admin the Stitchonomy Facebook Group this year.  Because apparently it's a rule that if I join a group, at some point I will be asked to help admin it.
(Side story - when I left work to have my son I decided not to go back at the end of my maternity leave.  One of my colleagues said "I'll give it six months and you'll be running something".  Sure enough - I was running the Toddler Group we went to!)
Anyway, Stitchonomy have just finished the Halloween SAL and I was planning to stitch my favourite motifs for my scrapbook.  Alyssa had designed a cute little haunted house and one or two others had done their own versions.  Which was when I had my plan - a tiny haunted village!  The top left design is the original by Alyssa and the other two can be found in the group on Facebook.  We are taking sign-ups for the Winter SAL, why not join us?
So that is three new starts and finishes for the first weekend.  Is it a bit naughty to count three minis as separate projects?  Well, that is the name of the SAL!

Next weekend I intend to stitch some more freebies I have been collecting and build my village up.
I actually had a new start the previous weekend, a new SAL with Leonore and some of the Just Nan FB group.  Yes, there has to be a Just Nan in my rotation at all times. 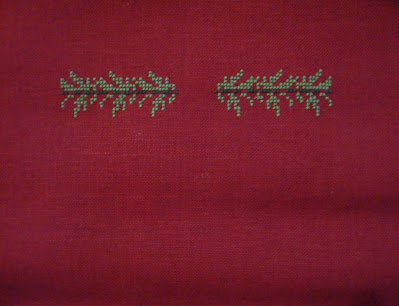 stitched on 28 count Burgundy linen
(think DMC 816 for a colour match)
The design is Snowfire Christmas and we choose this one because Leonore had it, she does not yet have such an extensive collection of JN samplers as I do.  I've set up a schedule of 2-3 bands per week to finish by Christmas.  The original is charted on white linen so this is a bold choice.
The other project I've been working on is my Alice in Wonderland SAL.  I didn't stitch the October block because it was Dark October so the plan was to do two blocks this month.  But last month the design was The Frog and Fish Footmen and this month is The Knave of Hearts.  With only one month to go, there is still no sign of The Queen of Hearts or the Caterpillar.  Both essential characters for me.
So I stitched the Knave of Hearts in his block.  If next month is the Queen, she will go in the bottom left block and I will chart a Caterpillar for the bottom right.  If next month is the Caterpillar, I will chart the Queen.  If next month is neither than I will just have to chart them both!! 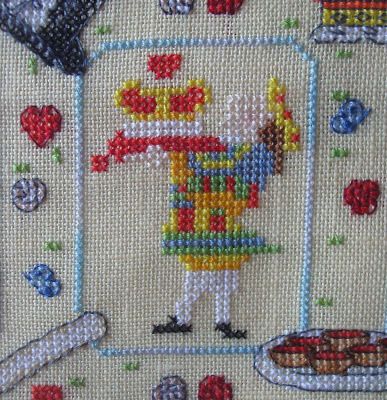 Knave of Hearts before backstitch 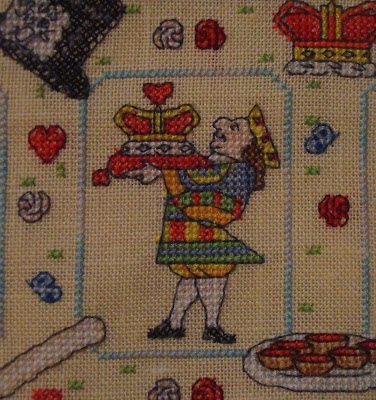 Knave of Hearts with backstitch
The whole project so far: 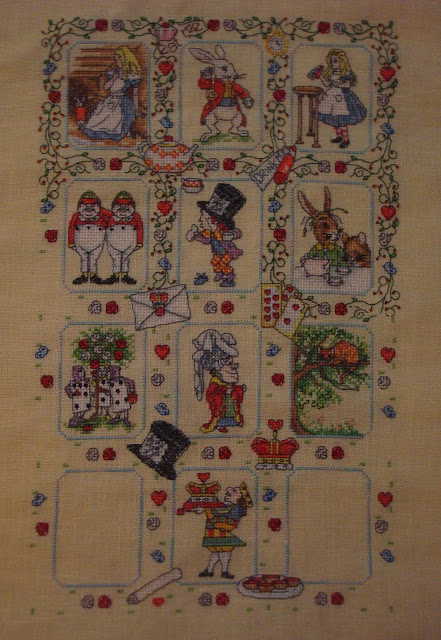 stitched on 32 count Yellow Belfast linen
It's an absolutely gorgeous design and I've loved stitching it.  It's a little disappointing that she randomly chose not to use the Tenniel illustration for the White Rabbit and used The Tweedles from Looking Glass but no other characters from that book.
The Knave has some gold thread and lots of beads to add.  I'll be doing those at the end.

🎄🎄🎄🎄🎄🎄🎄🎅🎄🎄🎄🎄🎄🎄🎄
Finally, it's time to sign up for the Advent Calendar Blog Hop!  For this hop, each participant is allocated a day in December to make their post on.  They will show something they have stitched on a Christmas theme and answer the topic question I set.   I then copy their photo onto my blog post in the style of an Advent Calendar.

So if you'd like to join in, please leave a comment or send me an email.  Let me know if there is a date you would particularly like or one you'd like to avoid.  I will be in touch towards the end of the month!

Here is a link to last year's so you can see how it works:
2019 Online Advent Calendar

Posted by Jo who can't think of a clever nickname at 20:46

Lovely stitching! I've been enjoying watching your Alice in Wonderland piece progress and the Just Nan will pop on that color.

The Alice in Wonderland looks amazing! Backstitching is like magic indeed! I will for sure participate in the Advent blog hop! Please give me a date closer to Christmas! Ha ha!

How naughty but I love your tiny little village. I do the same thing. I'm in several work out challenge groups. After a few weeks now I'm a captain haha. We are reliable I think that's why we get picked. Sounds good at least.

I love those little houses! A very clever idea. And that is surprising that there's no Caterpillar or Queen yet. I would think the last one must be the Queen, and really it seems like they could have done another row with all the great Alice characters.

Four new starts per weekend in November! I would struggle to keep up no matter how mini my design choices. Your Alice sampler is great and like you I would expect to see the Queen in the sampler. Not so sure about the Caterpillar but then I'm not that familiar with the detail of the story.
Please include me in the Advent blog hop. I have no date preferences.

If there's one thing you can usually be trusted for it's a slightly different interpretation of something, and your idea for Naughty November with lots of mini starts and finishes is brilliant! The little houses are soooo cute; I can't wait to see next week's motifs... a little graveyard perhaps?
Alice is looking good but I agree you definitely need both the Queen and the Caterpillar. Ans as for your new Just Nan, it looks fabulous on that fabric. :)

Awesome stitching Jo. I love the Alice in Wonderland.

Amazing Alice in Wonderland design, I love how it is turning out and what an awful lot of back-stitching. Please sign me up for the Christmas Advent hop, sometime around 14-15-16th, if possible. (before the grankids arrive)

Your Knave of Hearts is great. I could pretend I was hanging fire like you to see what the last block is, but the truth is I've just fallen behind. Having said that I do agree the character choice has been a little odd, and I may adapt the bottom row

Love your small houses, they are so tiny! And you do know already that I adore Snowfire on that bold read fabric.
The Alice SAL is looking freat too, but I agree, that is a bit of a strange selection of characters with two so important ones still missing. And they could so easily have fit in by leaving the Tweedles out or only using one Alice! Looking forward for what you'll chart yourself next month.