All Around the Discworld

"In a distant and second-hand set of dimensions, in an astral plane that was never meant to fly, the curling star-mists waver and part ...
See ..
Great A'Tuin the turtle comes, swimming slowly through the interstellar gulf, hydrogen frost on his ponderous limbs, his huge and ancient shell pocked with meteor craters. Through sea-sized eyes that are crusted with rheum and asteroid dust He stares fixedly at the Destination." 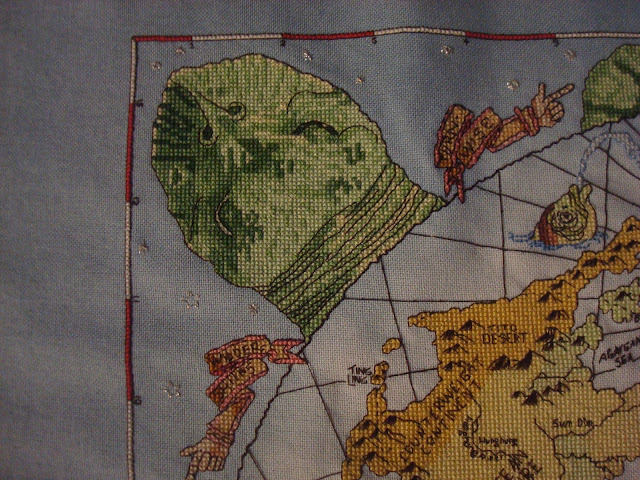 I started this one back in June 2017 with this photo: 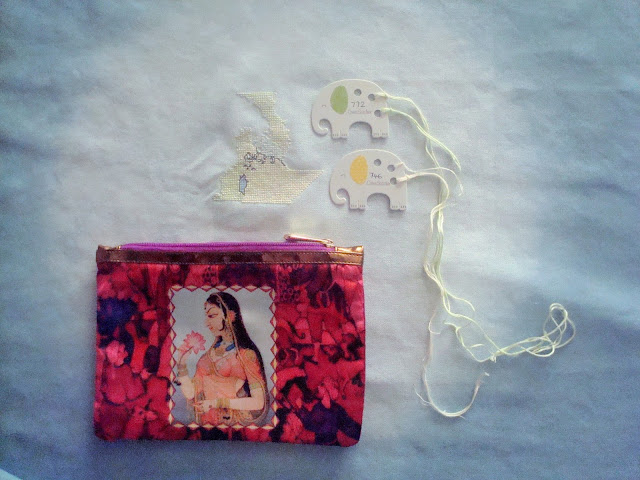 The fabric is a custom-dyed 32 count Murano from Sparklies.  I explained to Kate what I needed and very exact dimensions for the paler blue circle.  I started stitching in the middle and worked to the top so I could make sure the edge of the Disc would match up with the circle on the fabric.  Fortunately, it did!

Here are some photos of my favourite parts: 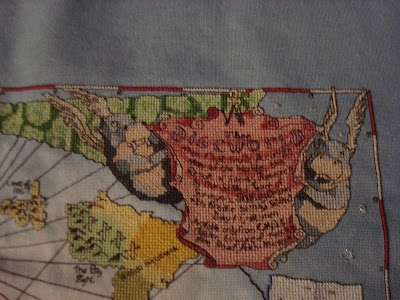 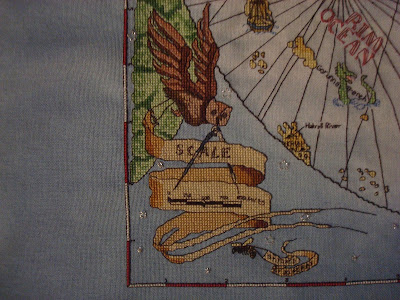 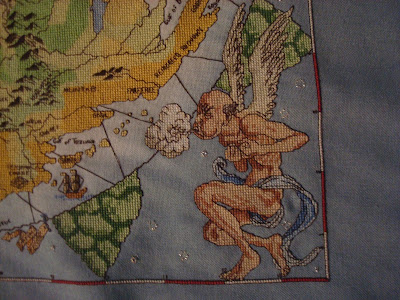 The very centre of the Disc, Cori Celesti is the Home of the Gods: 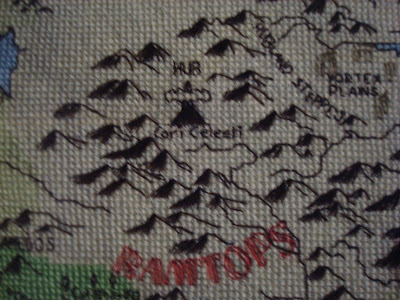 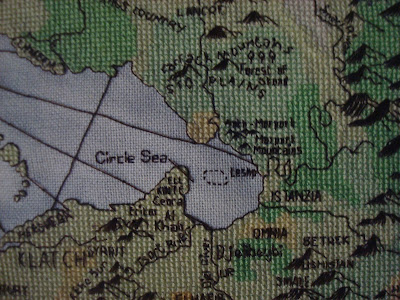 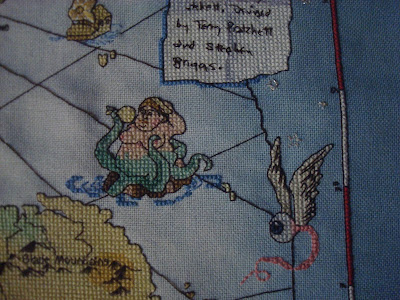 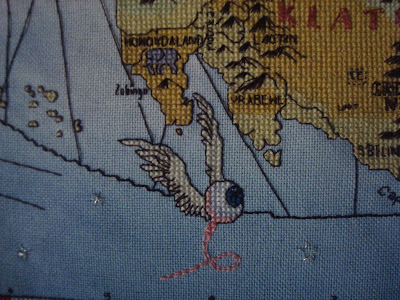 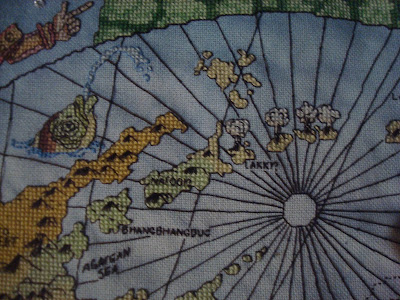 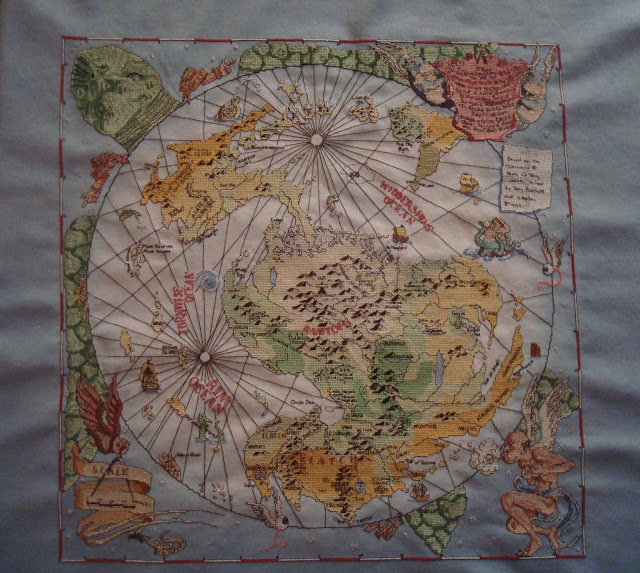 I do know how many days I stitched on this piece, anyone want to make a guess?

I recently discovered how to make Slideshows of my photos!

This one shows the progress throughout 2020:

Finally, the story of my love of the Discworld.  The first book in the series was published in 1983 when I was still at school.  I think my Uncle introduced us to the books as he had with The Hitchhiker's Guide to the Galaxy some years before.  My edition is a 3rd reprint from 1985 which is the year I started work so I probably bought it to read on the train.  It cost £1.75, about an hour's wages for me.  The standard paperback still costs an hour's wages at about £7.99 which is interesting when so many other things have seen rampant inflation.

I collected each book after that, getting the signed ones when my brother went to Uni and attended all the signings at The Forbidden Planet bookshop.  Then I stopped collecting about the time I started cross stitching on the train.  It was hard to read anyway as there were a good group of us who used to chat every day and socialise together off the train!

Fast forward to my son being born and being read to each evening.  We were given The Bromeliad as a present which he loved.  In April 2014 we started reading the entire series from the beginning.  This took us three whole years.  I started collecting the new hardbacks at this time too.  Then when we finished reading the series, topped off with the Science of Discworld books, I started stitching the Mappe.  Now to get it framed.

Thanks for being part of this journey with me, especially those who were tempted into reading the books themselves.  De Chelonian Mobile - The Turtle Moves. 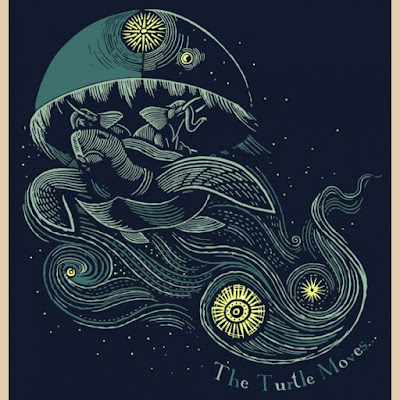 Posted by Jo who can't think of a clever nickname at 12:43

What a wonderful post! Such a journey you took, through books, reading them to your son, and now to immortalize it through your stitching. I've never heard of those books but now I'm intrigued...I wonder if they have them at our library? Your stitching is amazing!! Can't wait to see how you'll frame this! Even the intentional dying of the fabric is a story unto itself! Just wonderful!! Congratulations on your finish!

Just such a great piece. I can't read his books(my guys have tried to get me to a few times), but that piece truly inspires me.

It is absolutely awesome, I've loved watching it grow.
You must be so proud

I enjoyed reading of your love of DiscWorld and your son's introduction to it. The Mappe is an amazing piece. Congratulations on the finish.
The video is good to illustrate the progress of the design from start to finish.

Jo, I enjoyed hearing the background story to your Discoworld. This piece is centered around family traditions from your Uncle to you son and hopefully your son will pass on the enjoyment of reading the books to his children.And hopefully generations from now your progeny will wonder about the woman that stitched this amazing piece. It is truly amazing!!!

My guess on the piece about 100 days. It is so intricate, detailed. You did a great job on it.

I delight in the books too and the way you had the fabric dyed to your specifications was inspired. I have one project that is inspired by Sir Pratchett's work but not the linked illustrations. The opening to Guards! Guards! If memory serves me correctly. I do wish I had someone to share my delight, I keep trying to interest my BFF but it just does not grab her. The slide show is a fun addition, I just found it recently myself whilst working on Fred Astaire and Ginger Rodgers. Have you thought about loading it on U tube!

What a masterpiece. And to have the fabric custom dyed was brilliant. I am sure this will become a treasured family heirloom. Now the fun of choosing a frame;)

What an impressive finish! I've enjoyed watching your progress the last few years, and I didn't realize that fabric was custom-dyed. It looks fab.

Now that's an epic piece. How do you plan on finishing it? Will you frame it?

What an amazing finish after such a long journey! That must have been hundreds of days - I gather at least a full 'stitching year'? You and Kate both did such a wonderfull job with the matching fabric, I never thought that'd work as well as it did.
By the by, I finally broke down (I wanted to finish a couple of the series I started first but, let's be honest, I'm always going to start more...) and bought The Colour of Magic this weekend. Haven't started reading yet, though :)

Congratulations on finishing your Discworld map!! I didn’t realize the fabric was custom dyed until reading some of the comments. It is so nice when we can share the joy of reading with our children. My 2 sons and I shared the Harry Potter books together, that’s why I consult with them about the SYOA Letters from Hogwarts cross stitch project. I love all of the detail on the turtle’s head. We had a female red-eared slider turtle named Frodo as a family pet for 12 years.

Wow!!! I know you were so excited to be putting in the last stitches. Amazing. What a journey this piece has been.

I honestly hadn't seen this post when I made my own slideshow of Hogwarts, otherwise I would have asked you which program you'd used. Two great minds!!!
I thoroughly enjoyed watching the slideshows. When you look back at the first few months of progress it looked so much, yet was only a small fraction of the whole piece, but then how it grew after that! I hope at some point you tell us how big it is.
As for how many days... I'm thinking of roughly 10 days per month for just over four years... so let's go with a nice round 500 days?