April Stitch from Stash and a Happy Dance 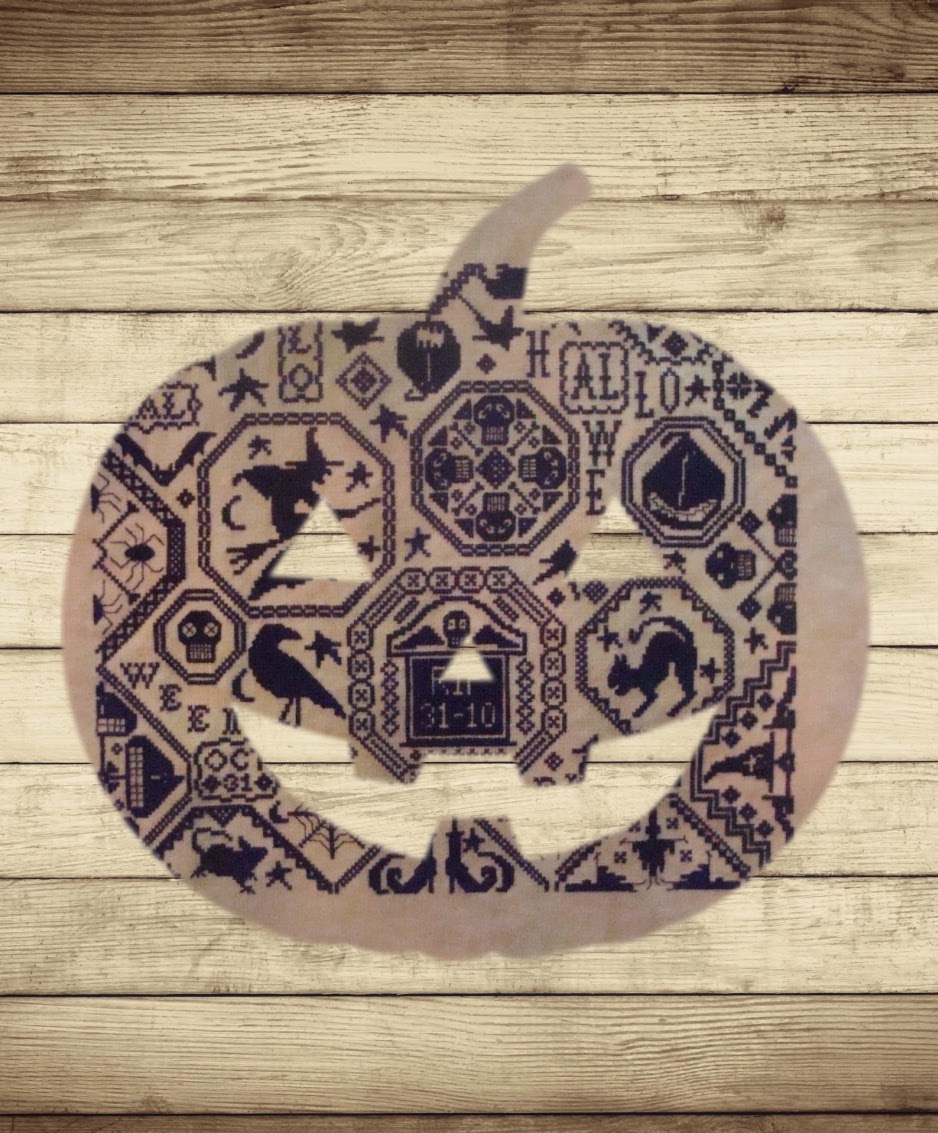 Stitch from Stash is hosted by Mel from Epic Stitching

Essentially the idea behind Stitch from Stash is that we are limited to spending US$25 (or £15) per month. There are various exemptions (Birthday money, existing mag subs, clubs etc) but the idea is not to try and pervert the rules and to stitch some of that stash!  I will be posting on or around the 20th of each month because that is when I get paid!

A good month.  I just bought one magazine which contained three charts I will definitely be stitching, the Satsuma Street Cities on black fabric,

On now for the main part of the blog, the part you've all been waiting for!  My Happy Dance on Prairie Moon's Thine is the Trick and the Treat.  I started this way back in October 2012:

I picked it up again in September 2013 and got this far by October:

And then nothing until December 2014 when I decided to focus on this project, stitching a minimum of one length of thread per evening.  This method works so well for monochrome samplers. 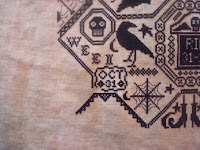 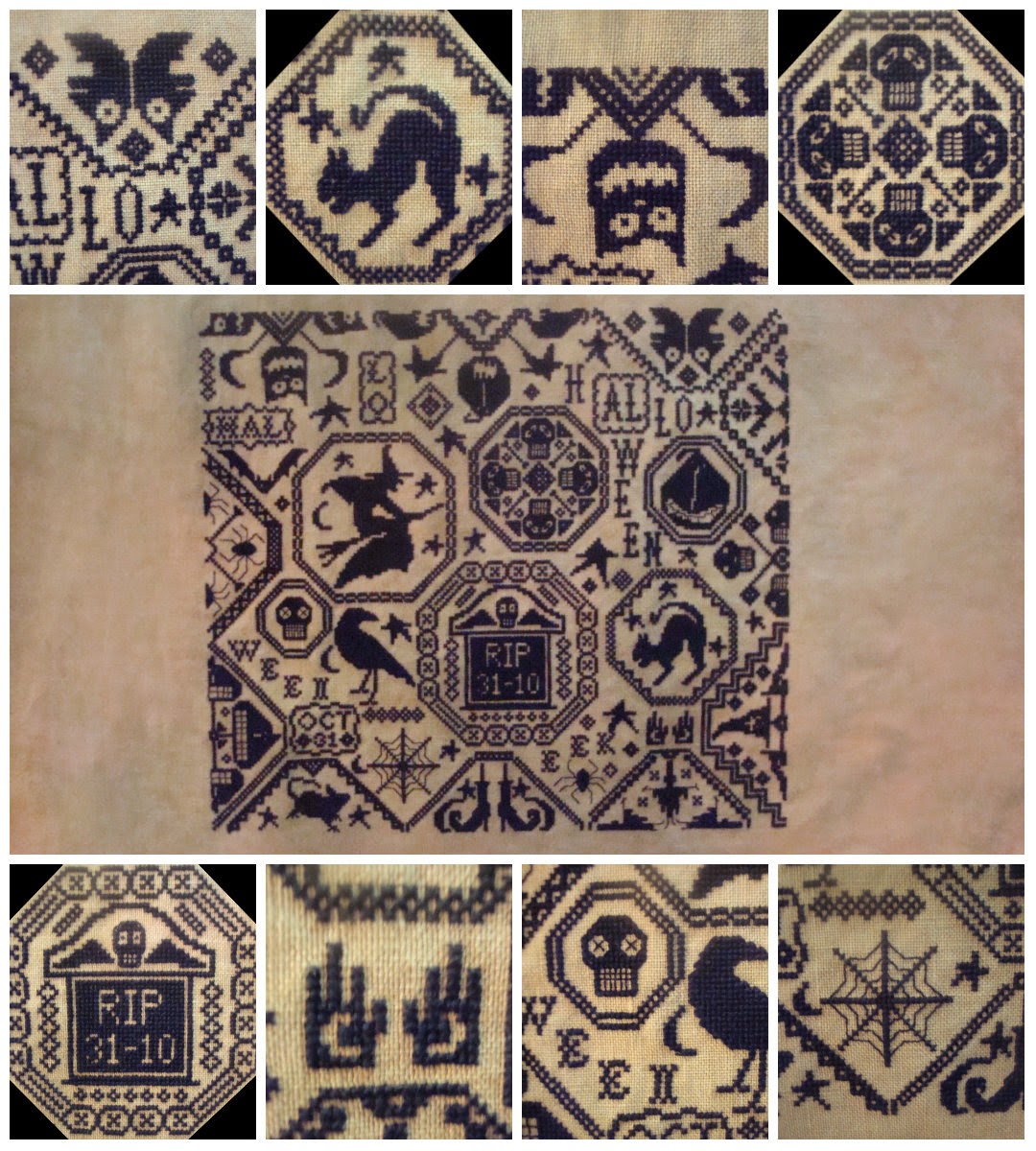 With my witch thread holder (from Primitive Hare) 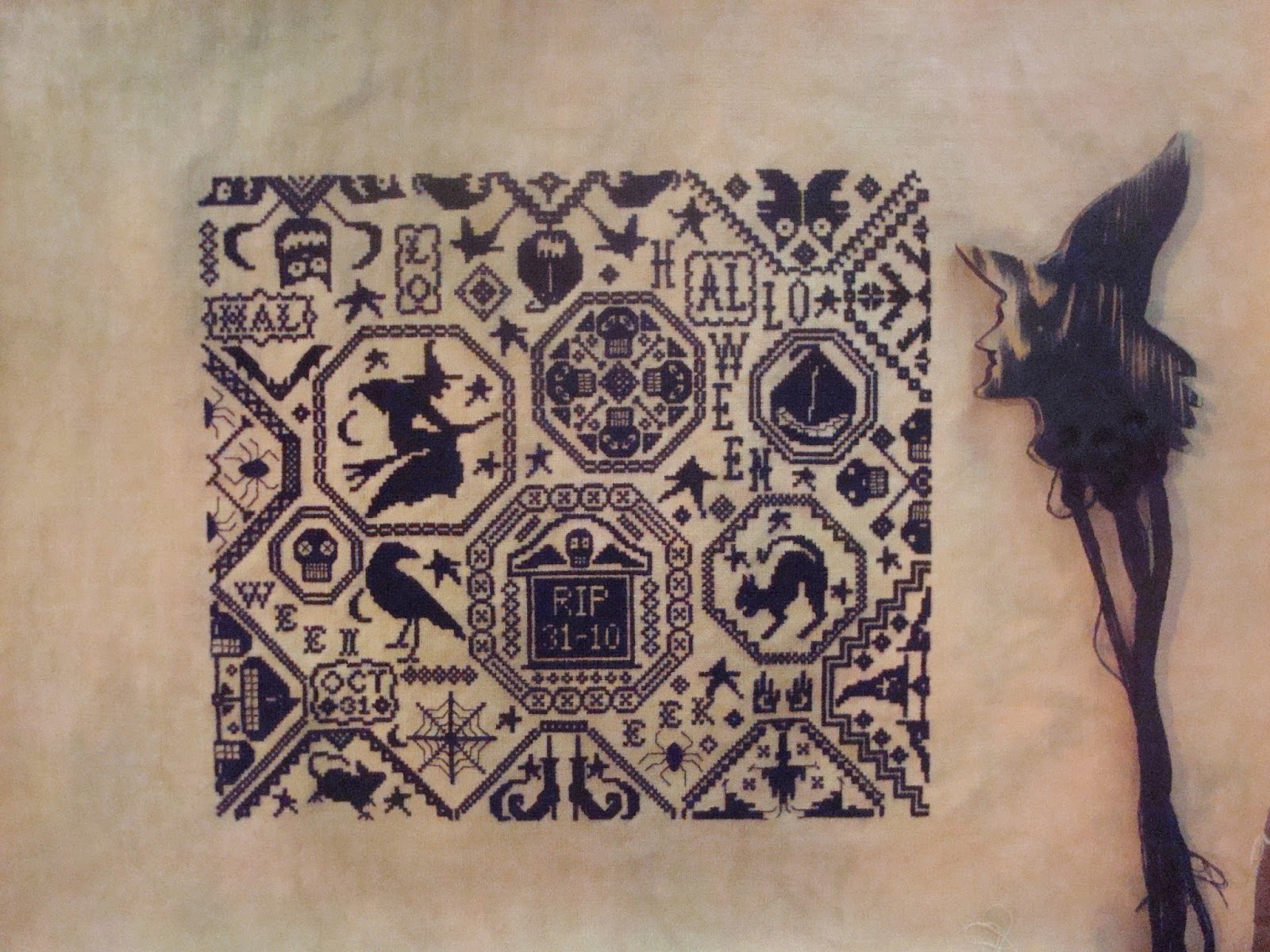 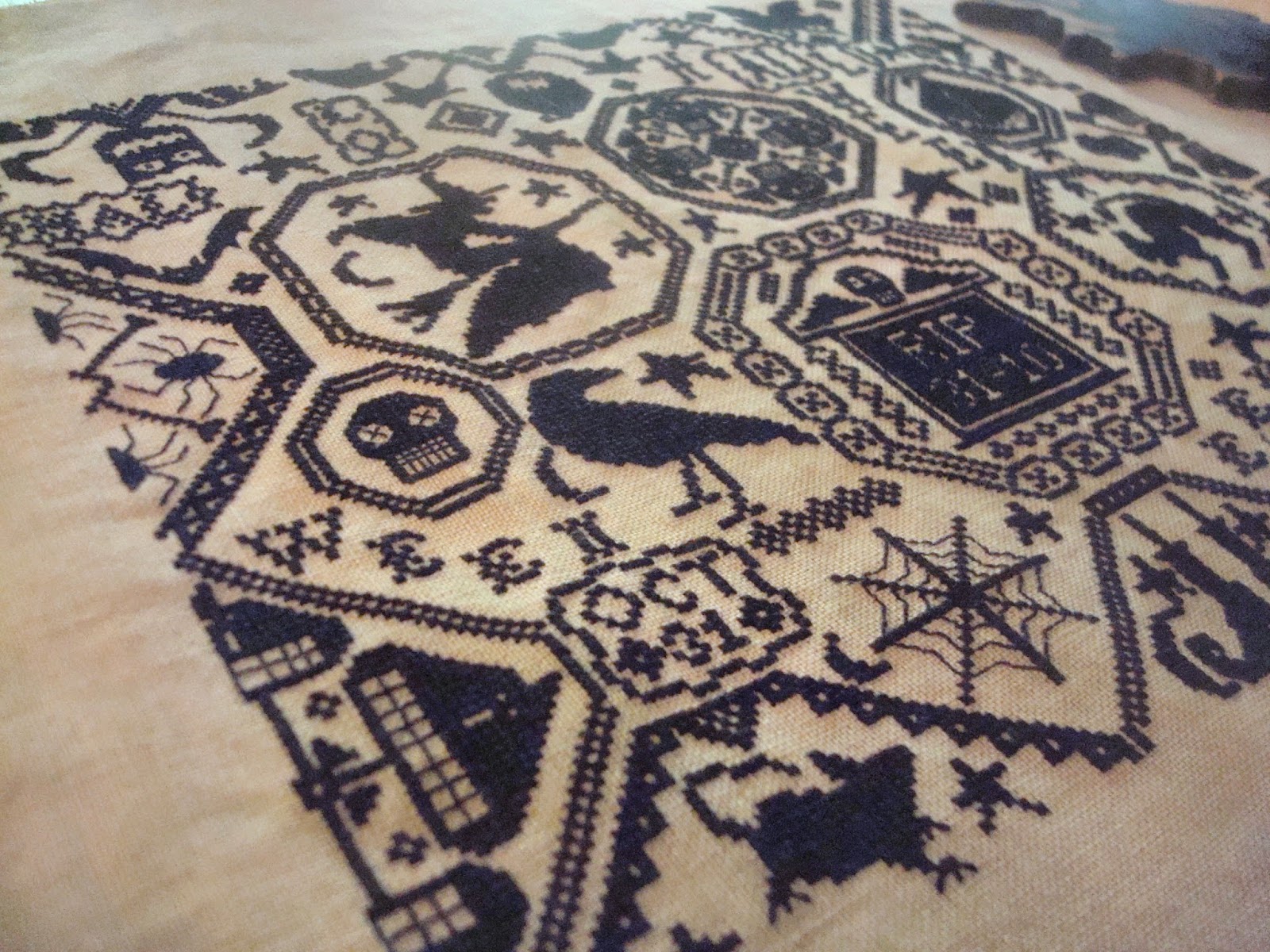 With my cone of DMC! 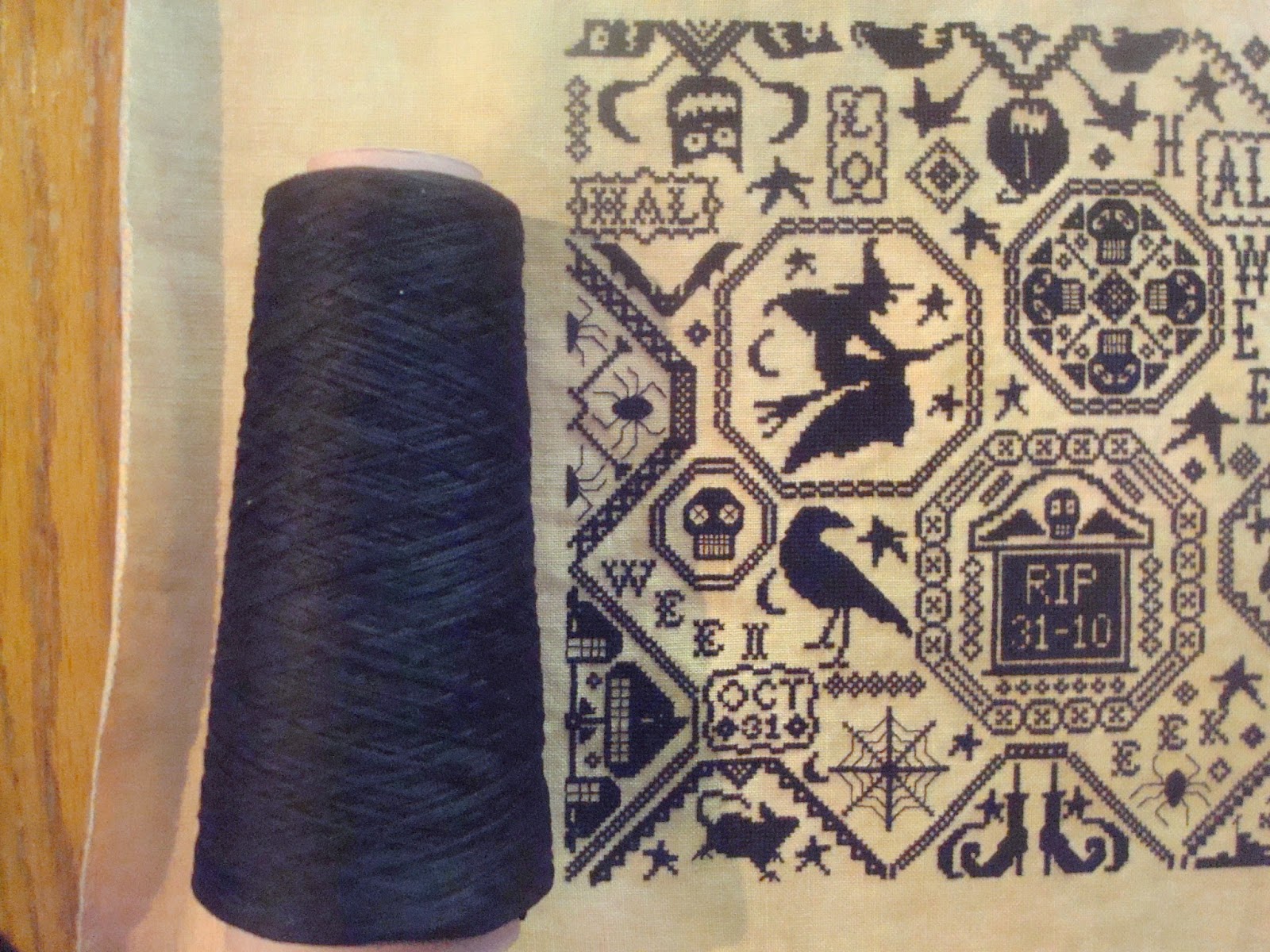 The fabric is a 40count hand dyed linen which was a gift from my friend Karen so I don't know who the dyer is.  The colour in the progress photos is more true to life than the finished photos.
I stitched using two strand of DMC 310 over 2 threads so the coverage is lovely and thick.  It made the fractional stitches a little lumpy so on some motifs I missed them out and on others I stitched them with one strand.
My favourite motifs were the cat and the witch.  I intend to stitch them again and make them into ornies for Hallowe'en.

Finally, this completion leaves a gap in my rotation!  I am going to be very disciplined and NOT make a new start.  I am going to continue on the black Hallowe'en theme and stitch this piece from my DUCJC challenge Day 10, Book of Spells by The Goode Huswif: 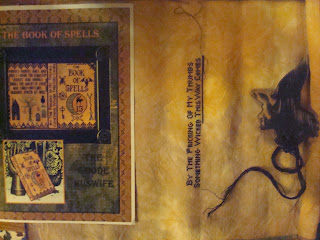 40 count Jewel Butterbeer from Under the Sea Fabrics

Posted by Jo who can't think of a clever nickname at 12:07

Email ThisBlogThis!Share to TwitterShare to FacebookShare to Pinterest
Labels: Prairie Moon, Stitch from Stash, Thine is the Trick and the Treat

WOW!! Congrats!! I just love this design and really enjoyed seeing your progress :) So glad you've finished it, it looks fab!!

What a great finish! I can see some great motif ornies coming from this. Love what you're stitching on next!

Congratulations on your fabulous finish Jo!
Your next wip looks great and what a great name for the fabric!

Well done on the lovely finish! that chart is stunning, I'm definitely going to have to keep a look out for it!

I can't wait for you to continue to stitch The Goode Huswif chart, it's a favourite of mine!

Congrats on the finish it looks great! I love your new project can't wait to see your progress!

Very beautiful finish!!
Lovely progress on the "book of spells" , have a fun stitching time!!

Congratulations on your awesome finish Jo! And we'll done on resisting a new start.

Congrats on the gorgeous finish Jo.

Beautiful finish! I love the cone and am pondering that purchase...for now I MUST BE GOOD!

Great finish. I must say I'm slightly jealous of that come of 310. It would feed my blackwork obsession nicely!

Fantastic finish! Good discipline to not have a new start and I love that fabric. Gorgeous colour.

Wow! Wow! Wow! Jo, that is so gorgeous, I love it! Another design for my Wishlist. Congratulations on your Happy Dance.

That is just amazing!! I have the chart so maybe I need to get busy!! I love it!

Congrats on the wonderful finish !! I have long back resisted new starts. I don't want to worry about the growing pile, so I stopped and I am feeling satisfied with what's on my hand right now. My todo list keeps on increasing, but that's fine.

Congratulations Jo! It is gorgeous.

Well done on your SFS, and so much congrats on that finish! It's looking awesome, I like how sou stuck to that one thread a night thing all the way to the end :)

... and now it's finished. Congratulations, a fantastic piece! And what you put into the empty rotation slot seems to be just another gorgeous Halloween stitch.

Wow! Congrats on your HD it looks awesome!

Great SFS report, Jo :-) And congrats on the beautiful finish! I love all the details.

Hooray for a finish and an extra hooray for your discipline! It will feel good make progress on another Halloweeny stitch. :D

Jewel Butterbeer is an awesome name for fabric.

What a fantastic finish! It looks amazing. Good job sticking to your budget, too! :D

Great job! And good for you going back to your DUCJC starts. I need to get stitching!

I love it! And those 2 motifs would make great ornies. congrats!

FABULOUS .... such a wonderful project, I've loved watching this one grow each week. Well done.

Congrats on the great finish!

Well would you look at you just flying along! Congrats on all your progress!