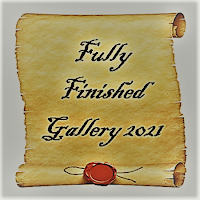 Hosted by Rachel the Ten Hour Stitcher
This SAL is designed to motivate us all to do something with that box of Finished pieces instead of just storing them under the bed.  We will all be linking up on Rachel's blog on or after the 10th of each month (10 Hour Stitcher - 10th of the month).
I managed to get a bit more done this month than previously this year.  Thanks school for reverting to five days for the last three weeks!
First up was this lovely Rosewood Manor ornament - Quaker Diamond Noel from the November 2009 Gift of Stitching.  Stitched in completely different colours to the charted version. 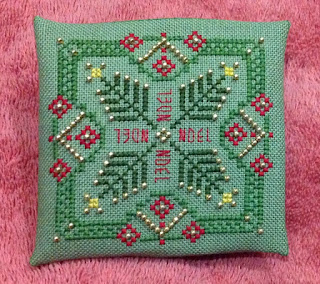 stitched on 32 count Reed Green linen
I finished it as a pillow ornament: 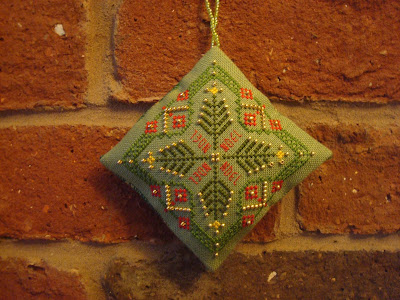 to ,match this one from last month: 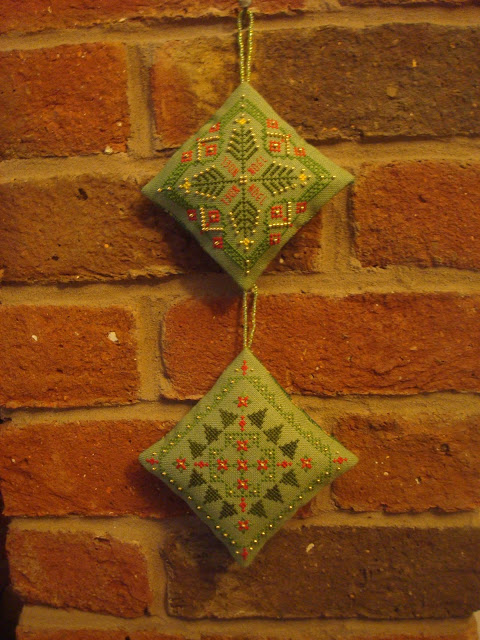 The backing fabric is an upholstery sample: 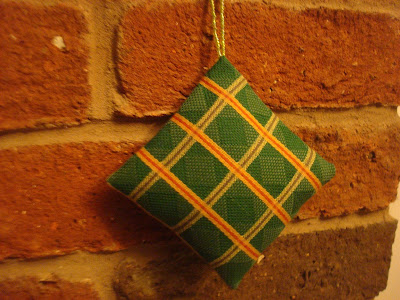 The next finish was one I stitched last year and was reminded about in my People's Choice post this month.  Small Delights Spring! by Just Nan: 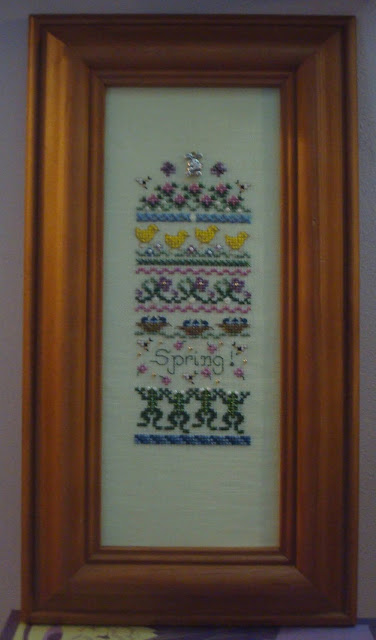 Seriously, ten minutes to mount it on board using double-sided tape and pop it into a charity shop frame.  Why the delay?
I did a little teaser for this final finish last week.  This was quite a mammoth task and a steep learning curve for the next one.  I had the Plum Street Samplers 12 Days of Christmas finished from a few years back (2016) and was not sure how to FFO them.  I eventually decided on an exploding box!
The first thing I did was get a 12 x 12 inch piece of thick double-side scrapbook paper and score various fold marks so it could become a box.  Then I mounted the first four days on thin card and stuck them to the paper. 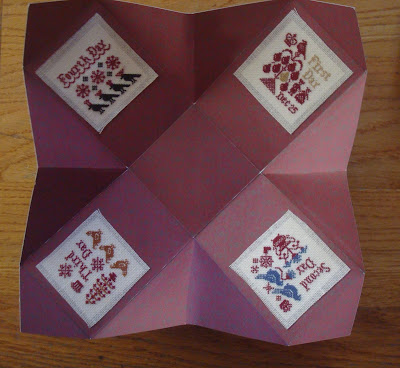 I turned the paper over and stuck some 12 Days pictures I had cut from a card purchased on Etsy: 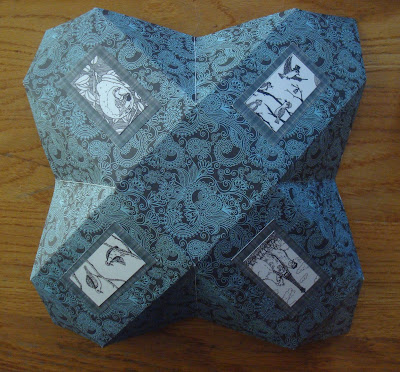 Then I took a second piece of thick scrapbook paper and cut four pieces, slightly small than the sides of the first box.  I attached the next four days on one side: 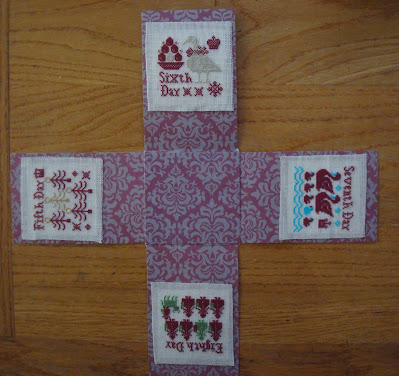 I turned it over and stuck the corresponding images from the card on the other side.  You can see how I stuck the four pieces together overlapping them to form a solid base: 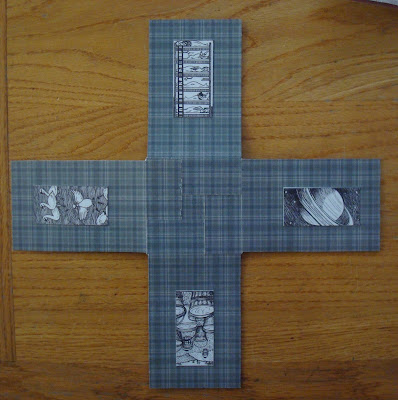 I used a third piece of paper to make the same shape, just a little bit smaller.  I stuck the final four days to this part: 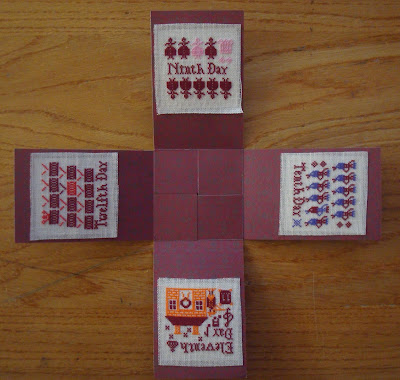 And the same on the reverse: 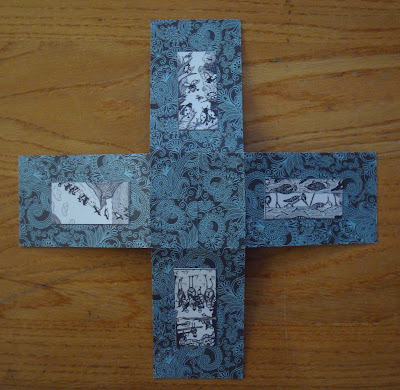 Using the offcuts from the second two pieces of paper, I made three lids: 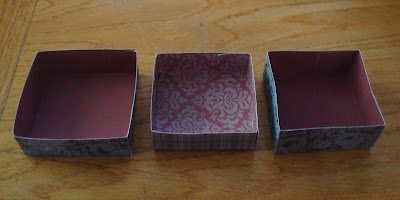 Then I folded the boxes up and put one inside each other: 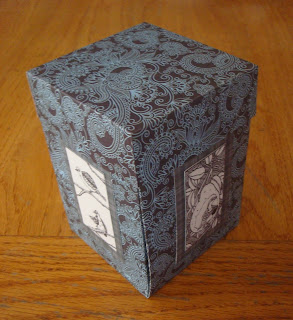 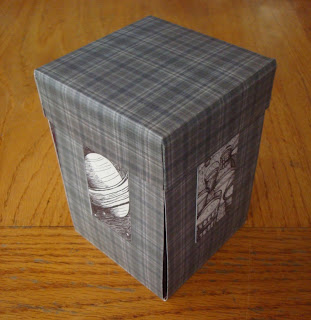 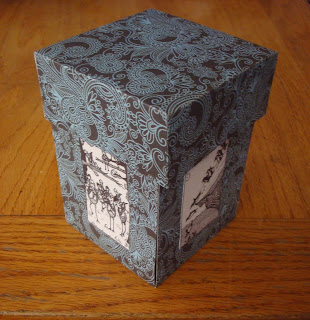 This was where the problems started!  The three boxes fitted perfectly inside each other.  Without their lids.  However the lid of the middle box made it too big for the outside one to close.  I adjusted the lid which then meant the smaller box wouldn't fit with it's lid on!  Now I have to make the smallest lid even smaller.  Next time I will make the difference between the boxes greater so I don't have this issue.
It's difficult to show how they work in photos so here are some video clips, with a surprise at the end of one of them!

Here's what the card looked like before I cut it up! 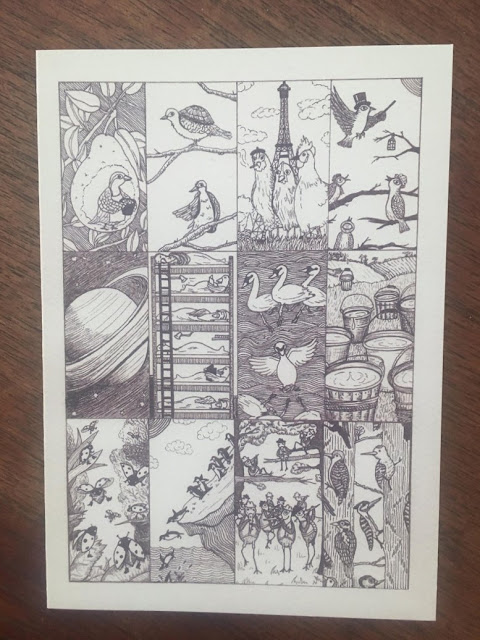 Available from Bunk Boutique on Etsy
This next piece isn't quite an FFO but it is for another of Rachel's SALs - Mischievious March.  I am calling my version The March of the Mischievious Mice for obvious reasons: 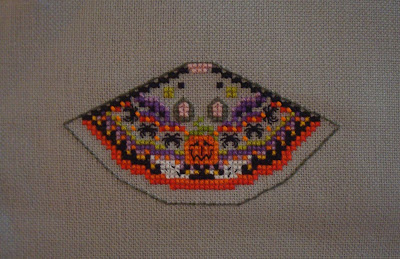 stitched on 32 count grey Belfast linen
My plan is to stitch four of Just Nan's mice in March, one per weekend.  Here is the first - Witchy's Sister Mouse.  I just need to add her broomstick, her hat (I need some pins for that) and her whiskers. 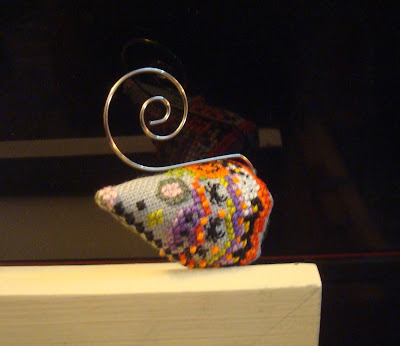 🐇 Good Friday - Friday 2nd April 🐇
Finally, it's time to sign up for the Annual Easter Treasure Hunt.    If you would like to take part this year, just leave a comment here.  The week before Easter I will send you a letter of the alphabet which will form part of the mystery phrase.  On Good Friday you will post that letter along with a photo of something seasonal that you have stitched (could be Easter or Spring or just something cheerful and sunny or floral).  We all hop around like little bunnies to find the Mystery Phrase!Here's a link to last year's hop so you can see how it all works - Easter Treasure Hunt Blog Hop 2020
Posted by Jo who can't think of a clever nickname at 18:52

I love that box, wow! That is really impressive work. Great little mouse and ornament as well. The colour conversion is gorgeous.

And yes, please count me in for the Easter Treasure Hunt!

Congrats on all of the lovely finishes Jo.

Jo: How adorable your pillows are.
Thank-you for the easy to follow directions on the box tutorial.
I will be trying this soon.
Your mouse is so sweet.
Have a wonderful day

Your Diamond Noel is lovely, very effective. What a clever idea with your boxes. Your mouse is so cute, a great FFO for March.

I always enjoy reading your post Jo .
Such beautiful work ,I love your first stitch , but every thing is just beautiful and the box making.

Oh, so many varied and interesting finishes, Jo! That little mouse is too cute and I don't even like mice :) Great job of finishing so many things this month! Enjoy your day ♥

Wow, that quite the boxes.Lots of work. Love the little mouse. hugs

Your 10 minutes would be 100 minutes for me, Jo! I seem to take ages when finishing, even for the simple things.
I love your exploding box. It's impressive.
Please include me in the Easter Blog Hop.

Hi Jo, Not sure where I commented before. Hope I’m in the right spot.
Count me in for the Easter hop.

That box is seriously impressive! Also I adore the take on the lords a leaping on the card.
Please count me in for the blog hop

Jo, you are so creative - your exploding boxes are just amazing!

You certainly had a GREAT finishing month! That exploding box is truely awesome, and the little mouse is so cute.

What a creative finish. Love it! That mouse is just too cute. I don't think I have any of the mice in my stash but after seeing yours, if might be time.

Fantastic work on everything.