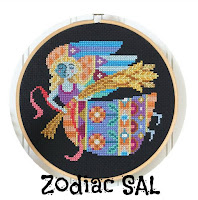 This month's sign is Sagittarius the Archer, a fire sign ruled by Jupiter.  Sagittarians are born between 22nd November and 21st December. 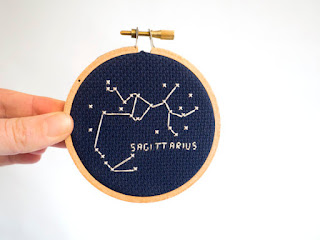 
In Greek mythology, Sagittarius is usually identified as a centaur: half human, half horse. However, perhaps due to the Greeks' adoption of the Sumerian constellation, some confusion surrounds the identity of the archer.  Some identify Sagittarius as the centaur Chiron, the son of Philyra and Cronus and tutor to Jason, who was said to have changed himself into a horse to escape his jealous wife, Rhea. However since there are two centaurs in the sky, some identify Chiron with the other, known as the constellation Centaurus.  Or, as an alternative tradition holds, that Chiron deviced the constellations Sagittarius and Centaurus to help guide the Argonauts in their quest for the Golden Fleece.

A competing mythological tradition, as espoused by Eratosthenes, identified the Archer not as a centaur but as the satyr Crotus, son of Pan, who Greeks credited with the invention of archery. According to myth, Crotus often went hunting on horseback and lived among the Muses, who requested that Zeus place him in the sky, where he is seen demonstrating archery.

The arrow of this constellation points towards the star Antares, the "heart of the scorpion", and Sagittarius stands poised to attack should Scorpius ever attack the nearby Hercules, or to avenge Scorpius's slaying of Orion. 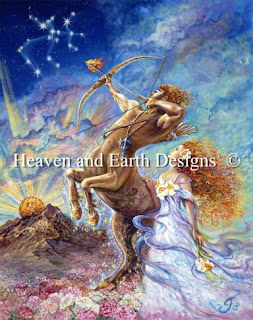 Sagittarius by Josephine Wall for HAED


Sagittarius People: What They’re Like
Send in the clowns! Witty Sagittarians can be some of the funniest and most entertaining people you’ll meet. They have a gift for seeing the absurdity of human nature and turning it into comic material. Yet, Sagittarians can also be wise and philosophical, revealing perspectives you might not otherwise see. This sign is ruled by the Centaur, a half-human, half-horse mythical creature. From the waist up, these knowledge-seekers are reaching for the highest truth. From the waist down…it’s all animal instinct and restless hooves. (It’s not easy being the ruler of ethics and the hips and thighs!) Busy Sagittarians have a million friends, projects and irons in the fire. As a result, they may not be the most reliable day-to-day allies. But if you have a five-alarm crisis, they’ll rush in for an epic save, even if you haven’t seen them in years. Time and distance are irrelevant to this sign—they have friends in every port, and if they connect with you, that’s all that matters. Personal development falls under the Sagittarius domain. They’re always up for meeting in a far-flung locale, taking a road trip or joining you for a weekend workshop. Falling for a Sag? Proceed at your own risk. While they can be deeply loyal and monogamous, these explorers must first sow their oats. Sagittarius is known as the “bachelor” sign. These natural risk-takers love to take on dares, and are shameless flirts to boot. You might find them organizing a talent show, rocking the karaoke mic, standing in an airport line, publishing a tell-all blog, or cracking bawdy jokes in the midst of a meeting. 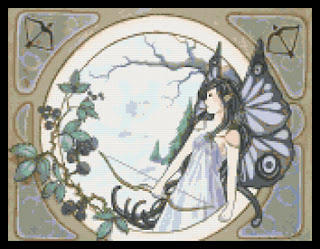 While looking for a cross stitch of one the people above, I discovered that Emily Dickinson actually stitched a sampler herself which is now kept at Harvard.  This is the only photo I could find of it, in a Facebook group called The Secret Life of Emily Dickinson: 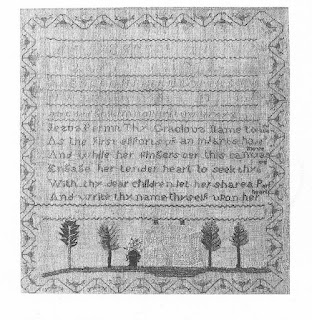 
For the stitching part of the SAL I have chosen a series of designs from the Donna Kooler book 365 Tiny Cross Stitch Designs. I am stitching them all on one piece of 32 count Millenium Blue fabric. Here is Sagittarius: 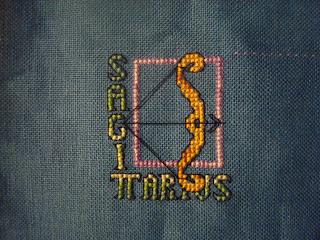 Here is the whole piece, you can see I had to use a tacking thread to work out where to start Sagittarius! 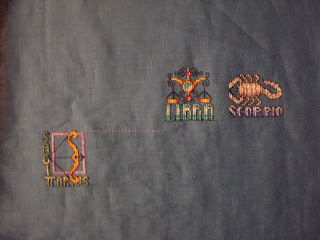 I am also stitching some of Satsuma Street's larger Zodiac designs starting with Virgo (my sign). I am stitching her over two on 28 count black evenweave. 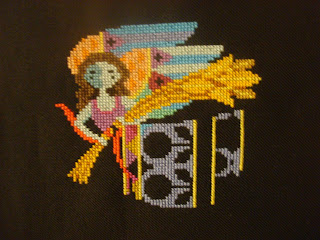 Now I have those big blocks of colour in place it will be easy to stitch each of the smaller areas colour by colour.

Sagittarius is a Fire sign, and what breathes fire?  Dragons!   Here's the perfect dragon for the start of Winter; Dragon Dreams' Dragon of the Winter Moon: 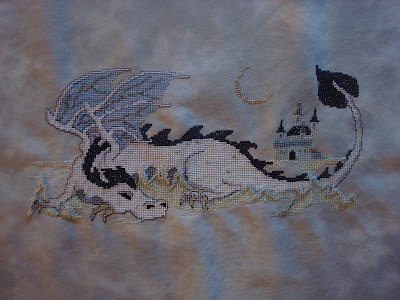 My cousin is a Sagittarius and although I haven't stitched anything for her yet, I did stitch a small piece for each of her children when they were born: 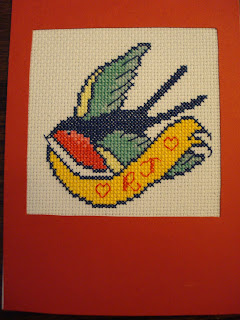 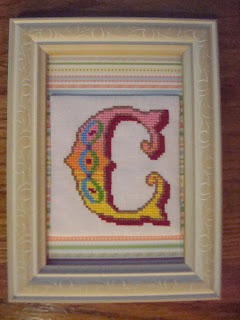 
This is the place for you to link up if you want to join in, please link to the actual blog post, not your blog homepage and include your name so we can see who has joined in.

Finally, the Advent Calendar Blog Hop has started, we have opened two doors so far with more to come each day right up to and including Christmas Eve.  Find the post here.

Posted by Jo who can't think of a clever nickname at 20:10

You make these posts so interesting Jo. Lovely stitching. I really do need to start Satsuma Street's charts.

Your Zodiac piece is going to be so pretty!

Jo: All such beautiful stitching, I have never followed the Zodiac, not sure why, but never have, I should take a look sometime.

Great idea with that tracking thread! It's so nerve-wracking having to start something waaaaay over on the other side of a piece. It's interesting that Dickinson stitched a sampler, how neat! I went hunting for more info; she was apparently 15! I wonder if that particular Puritan verse really appealed to her.

And I dunno... does a Winter Dragon breathe fire? Surely it's a frigid blast of ice! Ice so cold it burrrrr-ns!

I'll show myself out. :b

I love your Zodiac posts, Jo. It's so very interesting to read the stories from Greek mythology, and even more interesting to read about what is said about the people's character born under the respective signs :)
Great stitching for Sagittarius and the Winter Dragon comes in very handy here, doesn't he?

Lovely stitching for the Zodiac SAL. I have many Sagittarius people in my life thru relations and trust me they are opposite to what described above.

So does it sound like me?
Great stitching as usual, and it was really interesting to see Emily Dickinson's sampler

I would have thought you were a Sagittarius by the description!! Interesting post and love to hear that Emily Dickinson stitched a piece that is displayed at Harvard. Love the Satsuma stitch, such brilliant colors on the black.

This is a really fun SAL to read about. Thanks for sharing. Your projects look fantastic too.

I love love love Satsuma's zodiac patterns, and I keep checking her store every week to see if she's published the Sagittarius one yet. I'm not actually a believer in astrology, but I can't resist those glorious colors.

Sagittaire is really a nice pattern to stitch, bow and arrow very inspiring, I thought I'll post about grandson scrapbook but it ends with knitting needles...

A dragon seems to be quite fitting for a Sagitarius, both for the fire and some of these characteristics. I'll link up a bit later this month (well, not later than last month, which is technically not possible...but later than now!).

A very interesting post, as always. I love the dragon! x