A Flurry of Finishes

I have absolutely loved stitching OAAT on the 12 Days of Christmas but since I met my goal for this month, which was completing the Partridge block, I have craved a finish.  So here are two!

The first one is the JBW Antique Christmas Trees small that I showed as a new start in my previous post: 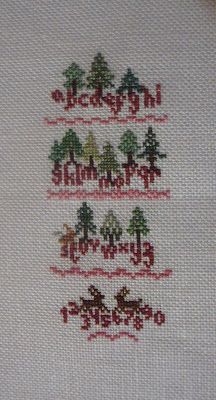 stitched over one on 32 count white linen

I stitched this using the DMC conversion but changed the letters to 3721 as they were charted in white which just disappeared into the fabric.  I think they were supposed to represent snow.  Those are French Knots in the bunny's rather over-sized bobtail!

Just to show the scale, here is another photo with some small coins from various countries: 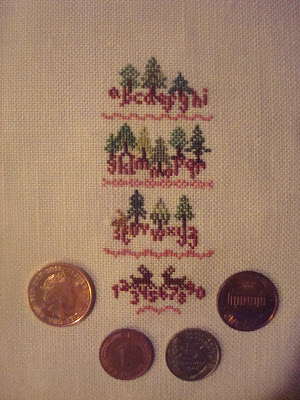 The second finish was the project I was stitching immediately before I started on the 12 Days of Christmas.  It got abandoned over Christmas but has now been completed:

Fox Forest by The Workbasket 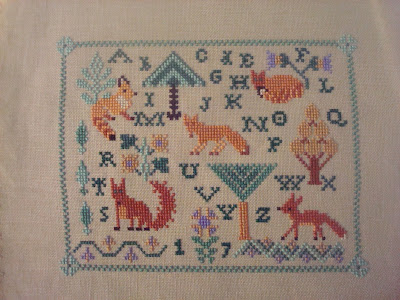 This is much better photo of the fabric colour 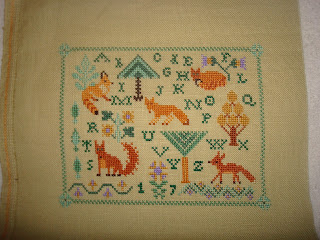 Again, I used the DMC conversion, tweaking things to suit.  Some of the conversion colours were a little strange, more khaki than fox-coloured.  I also zig-zagged the border instead of stitching two solid lines!   There are more Forests in this series so I will have to keep an eye out for them.  This is my first finish from my 17 in '17 WIPocalypse list, so a great start to the year.

I also have an FFO - Fully Finished Object.  I aim to dedicate Sundays to finish-finishing projects when I am not working a Sunday.  This one is Just Nan's Counting Bats which I stitched for the Hallowe'en Ornie SAL Blog last year.  It is a very long, thin design so I stitched two pieces of fabric to the sides so it would fit a standard photo frame: 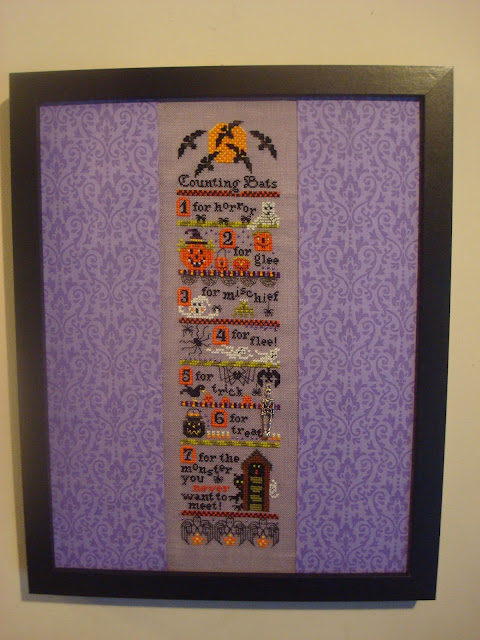 The fabric is the same that I used for the Hallowe'en Cubes so they co-ordinate nicely.  It took ages to hand-sew the fabrics together because both cotton and linen fabric had to be absolutely straight.  It would have been so easy to start to get off the straight line. 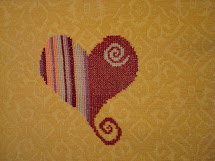 Finally, we have the Secret Stitching Sweetheart Blog Hop coming on Valentine's Day.  If you would like to take part, all you have to do is send me a photo of something you have stitched which is suitable for a stitching friend.  It could be a heart, or a pair of cute creatures, or the word "love" or anything which warms your heart.  Really anything you think a fellow stitcher would like to receive in her email Inbox.  I will then email you a photo to post on your blog on Valentine's Day.  Everyone then hops around trying to find out where their photo went and who is the Secret Sweetheart!

Posted by Jo who can't think of a clever nickname at 19:30

Cute finish with the foxes. Love the trees. They really are dinky. Counting bats looks great finished off. A fab flurry of finishes

Your trees look wonderful, I like the colour change.
The foxes are so cute, I don't know which one I like best!
Of course I love your Counting Bats, great idea on framing it.
You're off to a great start in the New Year!

Wow that's a tiny piece. Thanks for throwing the change on there to show us. Fox Forest is too cute too. Great job! Love the way you framed the Counting Bats. Perfect!

Ahhh! Antique Christmas Trees is so very adorable. So are the foxes. :D

Great finish on both and lovely finish-finish too. That's a good idea for those long skinny finishes, hmmm. It would be a good idea for me to try and finish things Sunday too, good thought!

Thanks for sharing your "over one" finish! I'm stitching a project on 25 over one and am loving how it's turning out! Your finishes are great!

Wonderful finishes all round. I really like the foxes and excellent fabric for Bats. I also like the idea of setting aside a day a week for finishing. Might have to give that a try.

Wow! Love the way the JBW trees came out - I like your version much better than the original. And so tiny! Thanks for showing the scale. Oh, and you've finished the fox sampler - it looks wonderful.

Congrats on all of the beautiful finishes Jo. I love the way you framed the counting bats.

Your miniature trees are cute. Congrats on the finishes !! The skeleton charm in the framed piece is nice.

Congrats on the finishes. Love the colors in Fox Forest. I like how you used the fabric in the frame to fit the stitching.

Great finishes and super-great finish-finish! I should try to set some time for finishing stuff as well, I have so many half finished projects just lying around.

Great finishes Jo, I love the Fox one

What a small tree finish, my eyes really couldn't handle this :)
A lovely fox finish too, I really like the colour palette on this project.

Wow...so many finishes...you should feel very pleased with yourself! Great idea showing the size of the stitching with the coins....it's tiny! Your eyesight must be very good :) Love the Halloween finish, I think that may be my favourite.

Gorgeous finishes, especially Fox Forest! I haven't seen it before. The colours are gorgeous.

Fantastic flurry of finishes!! Love the bitty trees, and the foxes are truly fetching. What a great idea to add fabric to the side of Counting Bats...it looks fab!

I'm impressed with all the pretty finishes. I love the way you solved the problem of a long thin design. It looks wonderful.

You always share the best ideas - adding the fabric to the sides of Counting Bats - such a great idea - but seriously I do believe the straight lines had to take some time. I also like the color you choose for the letters - and I do love Fox Forest.

Jo: Totally love your Antique trees, so sweet, the stitching is so tiny.
Counting Bats turned out great.
Love all your projects.

I'm totally impressed with your two finishes and you even have an FFO. (Btw, I love the expression FFO that I first heard on floss tube and which is so much better than having to write ""finish-finish"). And yes, I love how you used the pieces of fabric to both sides of the banner in order to frame it. Great idea,

The little foxes are so cute.
Great idea with the Counting Bats, why is it when you see something you think, why did I never think of that simple idea with a long thin project??

Lovely finishes and finish-finish! Very productive week, and a great way to start the year :D

Oh my, that is so tiny, so cute! Your other finish and FFO look great!

These are all lovely finishes.

Congrats on the finishes! They look great!