Pumpkin Pie? With a Side Serving of ORTs! 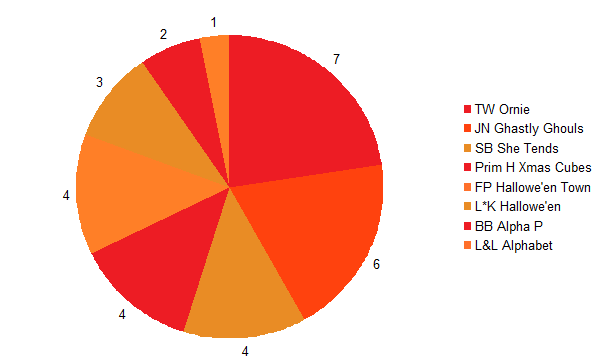 Pumpkin-coloured Pie!  The oranges make it a little harder to see which project is which but basically I spent more days working on smaller projects because I had less stitching time than usual.

I started the month off stitching on She Tends by Shepherd's Bush hoping to get all four completed but sadly not.  I wanted to get Frosted Pumpkin done and off the list and then the Teresa Wentzler Byzantine Ornament took more days than the previous two put together!  And then I ran out of beads and had to wait for SewandSo to deliver in three days instead their usual next day.  Here is the finished piece: 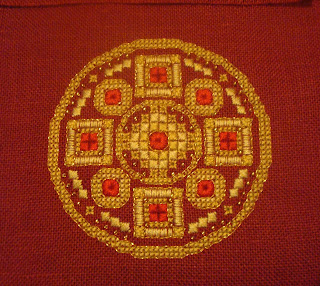 I also had a new start and finish for the Blog Hop which you saw then.  The Brooke's Book's letter is for The Alphabet Club next Saturday.  I can show you the latest letter on the Enchanted Alphabet.  I am stitching this one for the Now I Know My ABCs SAL for Cross Stitch Finish Line on FB.  The original design is by Lavender & Lace but I have changed the colours, the fabric and this week the placement of the letter: 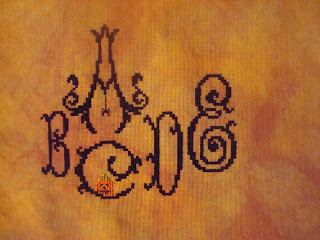 I wanted to use this fabric but it was just a little bit too short for the full design.  By removing the child from the design and moving the E to the middle (it was originally to the left of the B) the full alphabet will fit nicely onto the fabric with a good margin for framing too.

I'm continuing with Just Nan's Ghastly, Ghostly Ghouls mostly during my son's bathtime but also in my lunchbreak at work when I do a full day.  Here's the current progress picture: 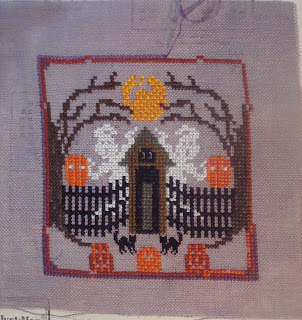 I did change the red in the border for 919 but I still think it's a little dark for the pumpkins so I might change them to 920 or even 921.

Here's the side-serving of ORTs for this month's second TUSAL: 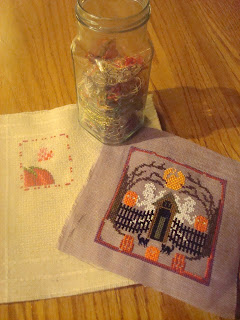 Spending-wise it was a much more frugal month after my Birthday extravaganza.  SewandSo revamped their website recently which caused enormous problems for everyone.  You just couldn't get anything to load and then when it did load we discovered they hadn't migrated our Wishlists in the first run, they were waiting to do that when the site was working properly.  Or when enough people complained!  Originally they offered us all a 10% discount from the website but after all the problems they upped it to a £5 voucher.  When I was eventually able to get it to load I bought the beads I needed for Byzantine Ornament and some lovely Lime Green 32 count for my Hallowe'en SAL project for next year.

Good practise for the Stitch from Stash next year.

Finally, don't forget to vote for me!

Posted by Jo who can't think of a clever nickname at 19:17

Nice progress Jo. I'm not much into Halloween stitching. Just a little.

oooooooooo love your projects ... hopefully the store that shall not be named (as we call it )has sorted out its teething problems with the website ...I stitched the enchanted alphabet many moons ago for my bestfriend at schools new baby (who will be 10 now ) did it in variageted purples and added a touch of silver here and there and she loved it phew .... love mouse xxxxx

Loving the post! Beautiful Stitching. Looking forward to seeing more. I like the pie chart. How do you do that? Happy Stitching! ~ C's Cross Stitch Creations~ East Coast Stitcher

Excellent finish on the ornament, despite the delays, and lovely stitching as always!

The ornament is beautiful. I know I'm repeating myself, but they are so rich looking. Great progress on your other pieces.

A lovely selection of stitching. I like your changes on the L&L piece.

Pumpkin pie? You can keep that! Pumpkin tastes of precisely nowt.
Great stitching though. The alphabet is looking wonderful. You could always zombify the child and stitch her seperately...

Love all the stitching. I need to go on a stash diet. Was going to start today, but I think I need to wait a day or two....

Your pumpkin pie looks great, i'll be sampling pumpkin soup tomorrow as the community centre have been given huge ones and are giving away free soup at lunchtime, something for free doesn't come along very often so i'm going to give it a try....

Beautiful stitching as always. You're getting me on a Halloween stitching mood, maybe when I finish my current WIPs...

I always love to see your PIE, but of course that means another month as gone by. I have decided the year 2017 will also be a Stitch From Stash year for me.

I love the Just Nan piece, it is really cute. Great practice for stitch from stah! I ordered something Oct 31 but have been good since then.

An orange-red pumpkin pie, the name alone makes my mouth water. And you also stitched projects with pumpkins or on orange or red fabric. A great Halloweenish month for you :)))

Great progress on everything! Good thing you got the alphabet to work on that fabric, it fits perfectly.

It really is a shame about sew and so, I hope the get everything figured out soon...the new site has so much potential, but I really want prices back in the wishlist...or the ability to change currency when logged in!

Great progress on everything!!