First of all, thanks to everyone who took part in the Easter Treasure Hunt Blog Hop and guessed the Mystery Phrase.  There were some gorgeous Spring and Easter themed photos shown on the participating blogs and some inventive ways of displaying the letter needed too.  The Hunt is open until the 6th April so you have plenty of time to hop round if you were busy over the Easter weekend.  Originally I allowed until the 8th which is my Blogaversary but then I realised it was going to be a VERY long post so I'm going to do a special post dedicated to the Treasure Hunt prior to that day.

I made some great progress on Nora Corbett's J Fairy and she is now ready for her bling!  The Kreinik will be next (the veins in the wings and some swirls) and then the beads.  Lots of beads! 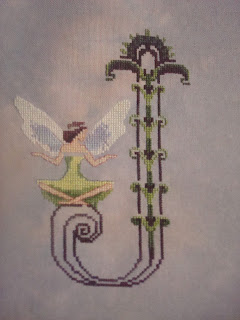 Close-up of the fairy: 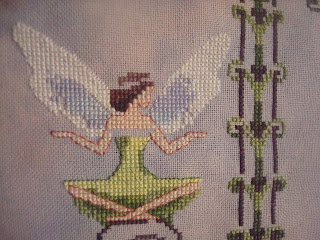 You can see from the gaps how much beading there is to be done!

She is taking a little break this week while I stitch the next letter for Brooke's Books' Stitcher's Alphabet ready for The Alphabet Club detention on Saturday.

I managed to stitch another motif for the Stitch for Syria project.  You may recall I stitched one in variegated red/pink on white evenweave and now I have one in yellow/orange on black evenweave.  I love this one! 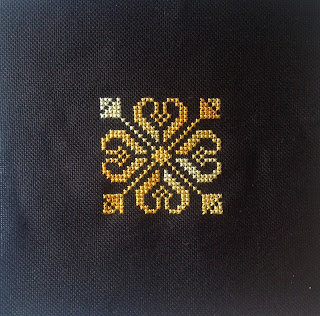 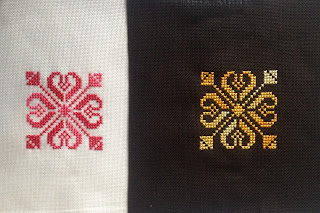 These two squares have been sent off to Concern's headquarters in London to be made into a hanging for their centre in Lebanon where many Syrian refugees and poor Lebanese women find a safe place to learn a craft and a way to make a living.  I also popped some spare threads in the envelope which should come in useful.  If you live in the UK there is probably still time to stitch one of these squares and get it to them by the end of the month.  If you are further afield I would advise emailing them to check.  Or send money, there is no time limit on money!

I have got a train trip later this week so I needed to plan my travel stitching.  I allocated a number to each of the designs in my list of series I want to stitch this year and chose one at random.  Just Nan's Spring Typography came up.  I've already stitched Awesome Autumn and Wonderous Winter so this must be Special or Splendid Spring, or maybe Spiffy Spring!  While I was hunting for suitable adjectives I came across this website - Adjectives starting.com with ...  Essential reading for anyone wishing to broaden their vocabulary. 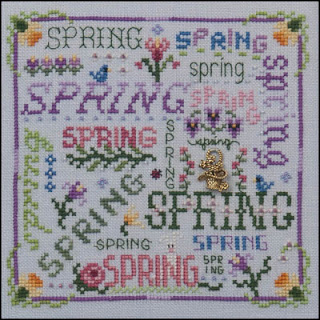 That photo is from Just Nan's website and here are my versions of Autumn and Winter: 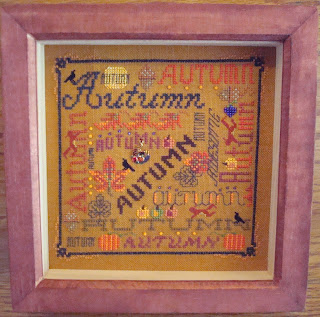 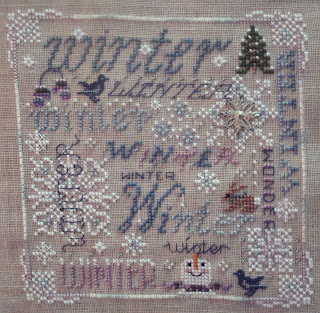 Finally, Crafty Sasha is having a giveaway on her blog.  She doesn't have a lot of followers yet but does have some nice charts!  So pop over and say Hi and offer to take some off her hands!  You can find her here - Crafty Sasha.  She is also stitching this - Qing Ming

Posted by Jo who can't think of a clever nickname at 20:30

Email ThisBlogThis!Share to TwitterShare to FacebookShare to Pinterest
Labels: Alphabet Fairies, J is for Joanne, Nora Corbett, Stitching for Syria

Hi Jo, loving your typographies - by the way, please take Summer Typography off your wishlist - a little bunyip whispered in my ear, that it might wing your way to you soon all by itself - what a clever pattern. Kaye xoxox

Thank you for pointing me toward Sasha's blog. I love the spring sampler as well as the two you've already done.

I love all the seasonal samplers!AriadnefromGreece!

Have a safe trip and happy stitching on your train ride!

I love your seasonal typography but couldn't you have chosen something with fewer thread changes for your train stitching?! Lol
That may be the prettiest one when completed so I'm actually excited to see your progress photos.

The blog hop was fun as they always are...

J Fairy is pretty,she will look lovely with her beads attached.
Love your colour choices on Autumn and especially your Winter typography.

The J fairy is very sweet - I love her 'meditation' pose. ☺ The yellow on black Syria square is striking, and Spring (Stupendous Spring?) will be very pretty. I hope your trip goes well!

Very lovely stitching! I do love those seasonal pieces.

Wow that's a lot of beads. Good luck with that.
Lovely Syria piece . I'm not sure my piece has reached their office as the person who was supposed to post hasn't communicated. What to say!
The Spring piece looks lovely. Thanx for the link to the adjective thing. It's amazing how much we learn, apart from cross stitching, from our blogging community.

You are making good progress on the fairy. Enjoy Spring!

J is a very zen looking fairy. I love the square on the black, so striking!

Your J is going to be so special. Spring has great colors, but Winter just really is AWESOME!

Lovely work on another square for Syria and on J! I finally worked on one of mine and just need to get my post up. Love your choice for the train stitching and your finishes on the other seasons too.

J is going to be beautiful! Can't wait to see it come together. Oh I love your Spring pick. Your other two seasons are beautiful already. I don't know what it is about my obsession with seasons haha.

Beautiful J there Jo... & the beading will make it even more stunning!

I love your Stitch for Syria - the colors pop on the dark fabric and it shows how you can change the dynamics of the same project. Just had to bookmark Adjectives.com - Always looking for fun ways to learn little things. Your alphabets are beautiful. Spring is a great choice for Train Travel

J is gorgeous Jo. Can't wait to see her all blinged up! :)

I love those Just Nan typographies - beautiful! What a lucky choice from the random number picker, just the right time of year.
Your J looks beautiful and I really like the colour change on your Syrian square. I bet Concern are thanking their lucky stars that they contacted you about their campaign. I wonder how many squares have been stitched as a result of your blogging about them?

The Easter blog hop was so much fun, you are right, there was a lot of great spring/Easter stitching to be seen. And a number of very creative letters. Thanks for organizing this again.

Great stitching, particularly the J fairy. And Splendid Spring is a great project for this time of the year. Have fun stitching it.

Oooh yeah, that spring typography is amazing. Can't wait to see what you do to it! And love the dark Syria stitch; black fabric always seems to help things pop~

Also I noticed you have the full feed available... but get this! You still don't show up in the dashboard! So my theory is out the window and I have no clue what's going on. Have you noticed a page view drop with them being fully available?

J fairy looks fabulous already, what more with beads! Can't wait to see your next post on her. The seasons look like fun, they're adorable:)

J is looking good already, so the bling should make her fabulous. Great choice for a travel stitch.

J looks amazing.. and she will be even more amazing with her bling!
Hugs xx

Great stitching! That fairy will look so awesome once she has her bling, I love your second Syria stitch and Spring looks like such a fun pattern as well!

Whoa that is alot of beading coming your way. I hope you don't fall into a beading coma. But she will look amazing as all Nora's fairies do and with you at the helm, well what can I say stunner! I can't wait to see how you tackle Spring as I love love what you did with Autumn and Winter.
xo Alicia