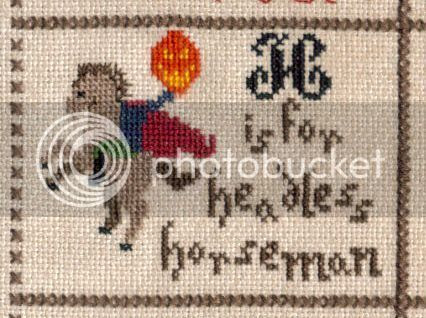 H is for Headless Horseman from A Dark Alphabet designed by Julie and Becky's Note of Friendship blog.

H is also for Hook as shown in the Brooke's Book's Stitcher's Alphabet piece I am stitching for the Alphabet Club SAL: 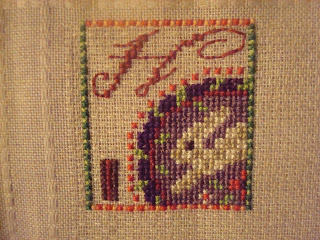 I do have to add the Kreinik to make the hook and some beads too.

I think that is supposed to be Hook that you use to make a latch hook rug rather than a crochet hook?  I made a latch hook rug back in the late 1980s.  They were quite the craze!  You bought a very large painted canvas and loads of precut lengths of wool which you made into knots around the holes in the canvas to form a nice soft rug.  The great thing about having one with an open fire was that if a coal burned a hole in it you could just reknot that area.  The one I did was so big I used to sit under it while I was making it and use it as a blanket.  A nice hobby for the winter months.

I've thought of two H themes for my stitching - Hearts and Houses.  I bet you all thought I was going to choose Hallowe'en!   Ha, that fooled you.  You get to see my Hallowe'en stuff all the time so this is a little different. 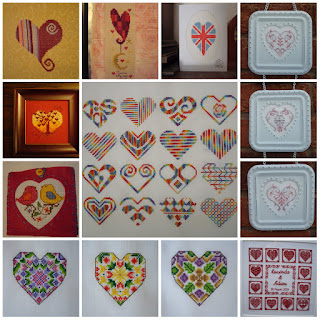 Here's a closer view of one by Heather Holland-Daly from her book Stitch Graffiti: 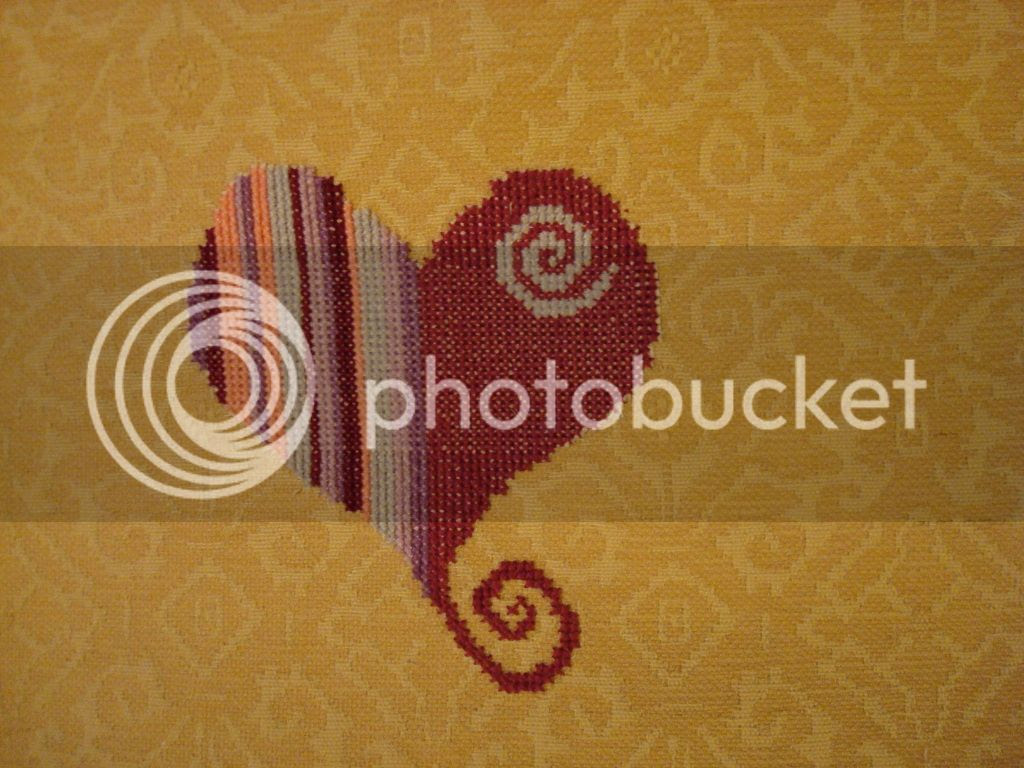 I stitched it onto some upholstery fabric using aida as waste canvas, which wasn't 100% successful, it was hard to remove the aida fibres from the more densely stitched areas. 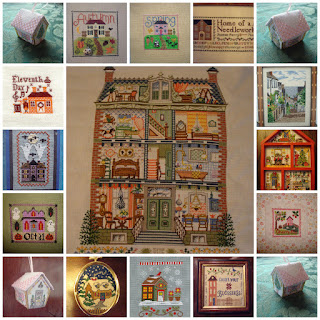 Both those collage photos are clickable so you can make them larger.

I have one H WIP, Hallowe'en Town by The Frosted Pumpkin Stitchery: 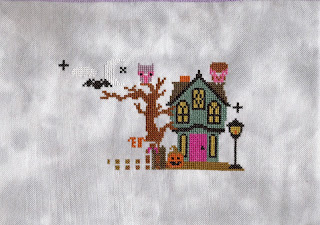 And some lovely Blogging Friends in my Blog Roll:

Hallowe'en Ornie SAL
(our group blog, so lots of friends there!)

Hanging on by a Thread

Home of a Floss Junkie 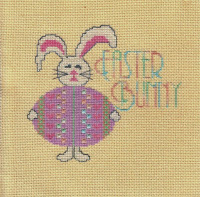 Finally, it's nearly time for the Easter Blog Hoppity Hop!  Taking place over the Easter weekend each participant will be allocated a letter of the alphabet which they must post along with a nice Easter or Spring themed stitched photo.  In recognition of the varied talents of my followers I think you can also show any sewn, quilted or otherwise crafted Easter or Spring themed items.

Everyone will then hoppity hop around like a little fluffy bunny and collect the letters which will spell out something seasonal.  If you would like to be a picture poster then please drop me an email.

Posted by Jo who can't think of a clever nickname at 19:48

Love your Hearts and Houses collage, Jo. Favourite piece, the lovely house in the middle of the collage, of course. hugs, Kaye xxxx

I love all of your house pieces Jo. Especially the big one in the middle.

You hobviously having hiccups with your headers, however house his hawesome, sorry, couldn't resist 😀

You did surprise me - I had assumed our post would be Halloween themed. Love the cut through house in the middle of our collage. I hooked rugs in my late teens and early 20's - most of my friends got one for their 21st birthday. Actually have a kit right now waiting for me to crack it open.

Great post I love the rainbow hearts in the collage.

Lovely post Jo. I love the hearts, I.m always attracted to heart designs ,however I'm still to stitch one. Love the houses too specially the 3rd from top right.

Nice to see all the hearts and houses. All of them are lovely and I liked the house frame too :)
Your H WIP is looking cute!!

I spotted that house frame too! It's lovely. I really like designs of houses but just do not like stitching them. That would be the perfect solution I think!

Oh great, your H post. And you are up to date with your Brooke's alphabet stitching. You definitely fooled me, too, as I was sure that Halloween would be one of your themes, lol.
Hearts is also one of my themes for this letter and I have just finish-finished one of them that I stitched a long time ago but have never turned into something. Your houses are wonderful, and the one in the centre is a stunning piece.

What a happy handful of handmade heaps of hobbyness. LOL Okay I give up. I love all your beautiful pieces. Great job!!

That's a Hoop! Why am I taking issue with all these letters LOL. Also I was fully expecting a Halloween theme. How dare you confuse us all :b

I like heart designs too and there are such an abundance of lovely freebie hearts! But the winner in this post is that fabulous house in the house frame. (And I see I'm not the only one in love with it.) Are there summer/winter versions of the spring/autumn stitches with the little charm?

Wow, lovely houses and hearts! Like the others I was also looking for your pretty Halloween stitches, lol. Great post:)

Great post and that is quite a collection of hearts and houses! Nice blog title too btw. :)

Jo: Maybe next year I will join the Alphabet Club, thank-you for sharing your H projects with us.
Chiara is such a sweetheart I love following her also.
Your Bunny is so sweet.

Love your H post... and your H WIP is great.... I am really warming to the Frosted Pumpkin Designs now :o)
Hugs xx

Love the hearts & houses, I especially love the new one you're stitching!

You have stitched a great collection of H designs!! That house is just amazing!

Hmm, you like your heart and houses don't you? What a lovely selection you have stitched over the years. How long would your post have been had you included all of your Halloween pieces too?!!! :)

Oh goodness....my eyes were darting across this post taking in all these lovely stitcheries! I'm not sure whether I should thank you or curse you for the link to the dark alohabet though....I shouldn't......but I LIKE it!!!!!
Halloween Town is cute! I have their Halloween Sampler on my "HAVE TO HAVE" list :D

Great H post, lots of lovely hearts to see.
I made a hook rug for my CSE exam project, designed it myself (although my dad did help with some of the hooking of the black borders), 4 blocks with a tree in each season, yes I am that old!

Great post for H...I love your houses and hearts, especially those rainbow hearts in the middle, und you H-WIP, which I finished last year, you should really give that one some love ;)

Interesting story on the hook as well, from the picture I would have thought that it's H as in hoop :D

Pretty lovely hearts :) but you also have some cute adorable houses in there :D
Great post!! :)

I really don't know how you keep up with all the SAL's and blog hopping and stitching clubs. You are amazeballs just for managing all that. I love those cut-a-way projects they are really cool. Hopefully I can start one soon too. Have a fantastic Easter xox Alicia