Stitch from Stash is hosted by Mel from Epic Stitching

Essentially the idea behind Stitch from Stash is that we are limited to spending US$25 (or £15) per month. There are various exemptions (Birthday money, existing mag subs, clubs etc) but the idea is not to try and pervert the rules and to stitch some of that stash!  I will be posting on or around the 20th of each month because that is when I get paid!

Once again, a zero spend.  This being broke business is great for Stitch From Stash.

So that's the financial side of things, how about the stitching?  Poor, good and good!  I picked up Brooke's Book's Trixie the Hallowe'en Witch for my Friday Frolic and didn't do too well.  I've done all the DMC and now have the Kreinik.  I didn't have any of the charted Kreinik so I took the time to convert them to DMC metallics which I have quite a collection.  The Fuchsia looks great in her eye mask but then I started on the black in her hair.  It just doesn't cover well or look sparkly at all.  So I guess I have to bite the bullet and buy the Kreinik.  I will probably try the other colours first in case I need to order those too. 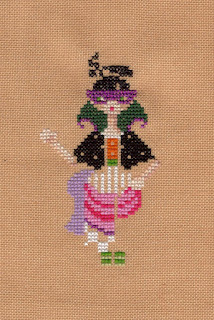 I was much more successful with Elizabeth Shephard from Scarlet Letter for the IHSW: 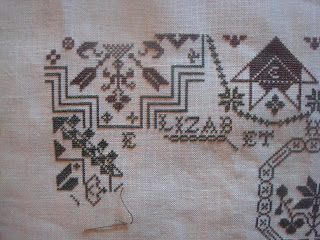 The top photo shows the two motifs I worked on this weekend and the bottom one shows the whole piece so far.  I've got three complete motifs and six half-motifs to complete on this one. 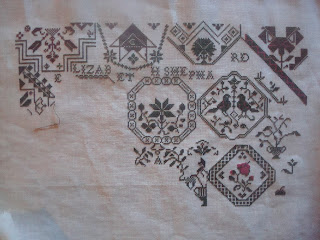 I was making such good progress by Sunday lunchtime I decided I deserved a new start!  Paulette from Plum Street Samplers recently posted about two ornies she designed for JCS back in 2011 and 2012 based on the First Two Days of Christmas.  People regularly ask about the other ten so she has decided they will be her SAL this year!  I have the two magazines with the originals in but even if you don't, you can still join in because she is giving them away for free on her blog. 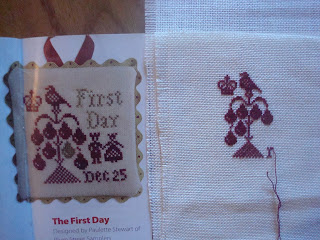 I've using a 25 count linen and stitching over 1 to keep them small.  The thread is a lovely silk from Splendor which Ruth was kind enough to send me.  She sent a selection of reds and blues and this was my favourite.  It's S826 if that means anything to anyone!  I'm planning on stitching these individually and scrap booking them unless a better idea comes to me.

Finally, Hallowe'en is fast approaching which means it's nearly time for the Hallowe'en Trick or Treat Blog Hop.  Regular followers will know the format.  Leave a comment here saying you would like to take part in the hop as a Picture Poster.  When I have everyone signed up I will choose a Mystery Phrase and allocate each Picture Poster a letter of the alphabet.  On 31st October they must make a blog post showing their letter and a photo of something they have stitched on a Hallowe'en theme.  On my blog there will be a list of all the contributors so people can hop around and collect the letters to work out the Mystery Phrase.  You don't have to be a Picture Poster to collect the letters and join in with the competition but all Picture Posters do get an extra entry in the competition.

Posted by Jo who can't think of a clever nickname at 10:18

Now I have read so much about Paulette's SAL that I went to see what it is all about - and what I saw was really good. I think I will at least download the patterns and maybe even stitch them and finish them as individual ornaments. I can imagine a smaller tree just with these ornaments.

Nice progress on Elizabeth Shepherd and little Trixie is coming along great.

Aha! I see you have discovered my secret to spending zero. "This being broke business" ;)

Well done on not spending anything this month. Your stitching is coming along nicely too.

I shall have to think about the blog hop - I think I only have one Halloween finish and I'm pretty sure I used that one two years ago for the hop!

Your Elizabeth Shephard is coming along nicely. Thanks for the link to Paulette's SAL ... hope I find time to stitch along.
*I would love to be a picture poster in the Halloween Blog Hop again this year! Sign me up.

Nice start and I hope you can find a solution for the metallics. I do find Kreinik much easier to work with than DMC for metallics, so hopefully the coverage will be there too for the hair. Congrats on not spending much!

Well done on no spending. I wish I could control my spending someway.
Your new start looks great.

I applaud your disciple on sticking with your budget. Bravo! Love Quaker pieces and your start on Paulette's mystery sampler is a great start

Love all the projects your working on Jo. Nice progress on them.

I'm right there with you with the budget! Although I have 2 interviews on Friday so that hopefully changes lol. Great stitching I love the 12 days I would turn them into ornaments.

Well done on your SFS zero spend month and on your progress. Good luck with your metallics stitching. I always get a nervous twitch when it comes to using metallics! :)

I love those ornies from Paulette but really don't need 12 more new starts....
Great work on your other pieces too. You work on such an eclectic range of designs!

I saw those ornies Paulette has designed, printed off and just need to decide what I want to do with them, have a couple of ideas running through my head for them but need to stop procrastinating and make a final decision lol.

Count me in for the Halloween blog hop...

Beautiful stitching progress, and I love your new start! I'm going to have to check out this SAL when I have the chance :D

Wonderful stitching, Jo, how annoying about the Kreinik. I have started Paulette's SAL, too, just haven't had a chance to post about it yet. Please count me in for the Halloween Blog Hop - your blog hops are always such fun.

Wonderful on another 0 spend (even if it wasn't by choice!!) I'm stitching the 12 Days as one piece and have the top border of one box done. It took me FOREVER to find the threads I knew I had but had put in a "safe" place, so I didn't get to start as early as I had planned. Trixie is coming along nicely. Black seems to be a problem color in all of DMC's fibers.

First, I must say that talking about H t&t BH I told DD3 I won't join the group this time, already busy with too much WIP. Then she looked at me, saying she never had enough bookmarks adding she's studying literature. How kids are clever to make you feel guilty. So I sign up for Halloween BH, A Mum must always support children studies!

Congrats on the zero spending, and great progress as well! I'll have to save that twelve days stitchalong, it looks awesome even though I don't have time for it right now ^_^

Great progress on your projects. Count me in for the blog hop.