You Can Tell It's Term Time Again...

My Blog Comments email folder has gone over 100 emails to answers, my Reader had 200 posts to read (got that down to 140 now), it took all week to stitch an ornie I could have done in one day and I'm feeling a little "peopled-out" having done two days at work, one parent support group, two friends visits and a Toddler Group too.  I need to hermit this weekend!

I chose the themes for the Hallowe'en Ornie SAL blog back in November last year so they tend to come as a surprise to me by this time of year!  I wasn't sure I would easily be able to find something for this month's theme"Spooky Words" but as I looked through my issues of JCS I realised there were loads of designs I liked!  Which is probably why I chose this as one of the themes in the first place.

I found a nice design which said Hubble Bubble Toil and Trouble which reminded me of another chart I owned.  When I found that one it was too large for an ornie but in with it was this one which was the perfect size stitched over one.  I do love my over one stitching. 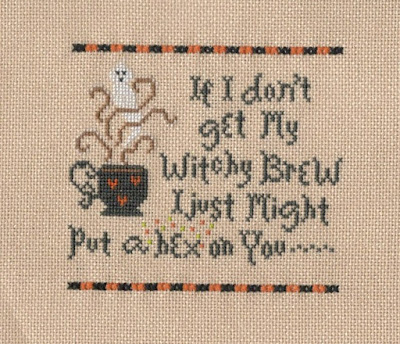 stitched over one on 28count light beige evenweave

This is the debut design from 2009 by Tammy who has a blog called Witchy Stitches.  It's not easy to see if she has many other designs because there's no page for her own stuff.  But there is a sweet Wynter Witch.

Anyway, I stitched this one using the recommended DMC conversion except for the lettering and mug which I subbed 3799 for plain black.  I thought it was closer to the Gentle Art thread the model stitcher used.  Because I stitched the design over one I was able to cheat on the border and stitch it over two which saved so much time hahaha.  I also added some little starry stitches around the word "hex" just because I wanted to.

I'm not sure whether to scrapbook this with the others or frame it and put it next to the kettle to drop a hint to my family!

I managed to put a few stitches into Satsuma Street's Pretty Little London for my Tuesday SAL with Linda and Kate.  White, cream and dark blue added. 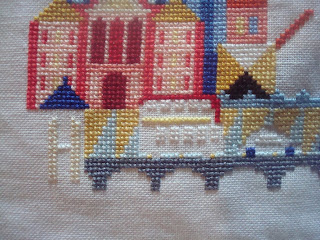 I'm also progressing on Book of Spells, I do enjoy stitching words and as I took this one to work with me one of the days I got quite a bit done in my lunchbreak: 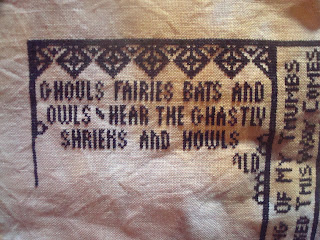 stitched on 40 count Jewel Butterbeer linen in need of an iron!

Finally, the Summer Postcard Blog Hop is all done and dusted for another year!  The final card came to me from the lovely (and very patient) Leonore from Needle, Pen & Sword 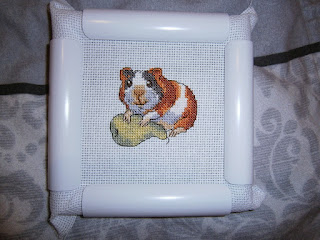 I had pets when I was younger, and I loved them, but to be honest, I was never really up to the responsibility, and much of the actual work fell to my grandparents, with whom I lived. Now that I'm old enough to decide if I want pets of my own, I'm also old enough to fully grasp what it really means to be responsible for another living being, and I sadly realized that I don't have that kind of time at the moment. But I sincerly hope that I will in the future, and until then, stitching cute little critters will have to serve as a subsitute :)

I have to agree, he is totally adorable!  I have never owned a guinea pig but the Large Boy had a cuddly toy bought for him when he was a Small Boy and I did stitch a picture of the creature one year: 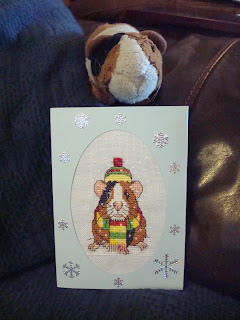 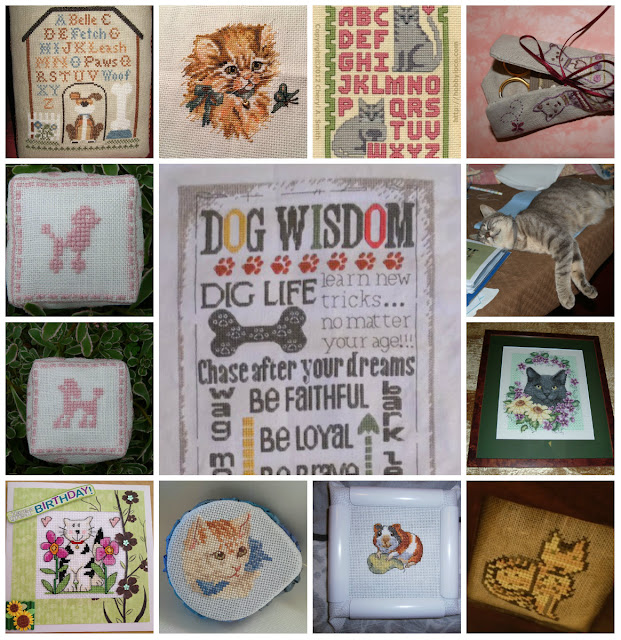 Posted by Jo who can't think of a clever nickname at 19:40

I could guess from your absence that you got busy with school.
I love the design chosen for theme Spooky words .
Great summer blog hop -the collage of all the pet stitching looks beautiful.

Well you have been reading busy! Lovely stitching too

Welcome to my world! As I work full time plus lots of family and friends commitments, I am always waaaaay behind on my blog reading and replies to commenters. Sometimes I think that blogging could be a full time job on its own! Love your new Halloween finish - I am off to check out Tammy's blog right now! hugs, Kaye

P.S. Thanks for organising the Summer postcard blog hop.

Lots of wonderful stitching! I would like to do that coffee one for my DD who loves her coffee!

You've really been busy! Love the changes you made, i see the hex stitches:) Your WIPs are coming along nicely too. The Guinea pigs are so adorable:)

Aww I enjoyed seeing Leonore's stitch and yours too. We had a guinea pig years ago when the children were small. She was a long haired girl named Gracie. She lived to be 8!

You have been busy. Loving watching the progress on these two. My first week back has been a bit like that too.

I think you've done really well while being so busy. Love your spooky words. And thanks for the blog hop - enjoyed it immensely.

That witchy piece is so cute! Good companion to Plum Street's "Brew Ha Ha". Gotta love a cute guinea pig too!
You sure make good progress during busy periods. I guess it's true what they say about when you want something done, give it to a busy person!

We all have busy times Jo, I'm sure you'll get back into a good routine really soon... lovely stitching there

You can tell it's term time because the sun has come back out!!!
I love the witchy brew piece

Oh no, so summer is over already? It was way to fast, wasn't it? Good luck getting back into your usual rythm, and yay fpr that cute little finish. And at last my sweet little piggie is out too, the one you did is so cute as well! Thanks for hosting the hop, it was tons of fun to follow ^_^

Love the Halloween stitching!! (as always!).
Have fun going back to a little routine :)

I love the wicked brew pattern.

Lovely stitching !! You have been busy, you deserve your hermit stitching :)
Love the last two postcards, very cute!! I have the same concern that I don't have time and energy to take care of a pet . My daughter wants one but I know the responsibility will fall on me.

I know exactly how you feel.... I never seem to catch up on blog posts and emails these days!
The summer blog hop collage shows off all the gorgeous stitching everyone has done....
I love the wicked brew - it is great :o)
Enjoy your hermit weekend!
Hugs xx

The Witchy Brew piece is lovely.
We had guinea pigs and the man of the house ended up cleaning them out each week when my daughter failed to do it. the neighbours have 3 and 2 rabbits and 6 cats... this week we are pet sitting them all... that's responsibility!!

You were so busy with all your projects an all of them show some nice progress. The little Halloween piece by Tammy is so sweet and wow, stitched over one.
I love the postcard you received from Leonore. Now I have to go and see if I missed one of the postcards, I'm not sure.
I hope you were having a great hermitting weekend.

It's so nice to know someone else gets "peopled out" and needs to hermit. Some days at work are just about all I can do when it's constant engagement. Kindred spirits we are for sure in more ways than one. Lovely stitching!