TUSAL of Ice and Snow

It's TUSAL time again!  For those of you new to blogging, the TUSAL is a project run by Daffycat, click on the button on the right hand bar for more details.

Today is the second New Moon of the year so we post our ORTS pictures.  This year is rather strange because there are 2 New Moons in January and in March but none in February!

This year I am intending to stitch The Little Stitcher's Twelve Days of Christmas as a monthly project.  Laura has designed twelve charts with a different theme for each one to represent the days of Christmas.  She has invented the different themes herself using her lovely imagination!  The Day of Ice and Snow is actually chart four but that would have meant stitching it in April and I do not wish to have Ice and Snow in April, so I have moved it to January.

Here is the design as part of my TUSAL photo: 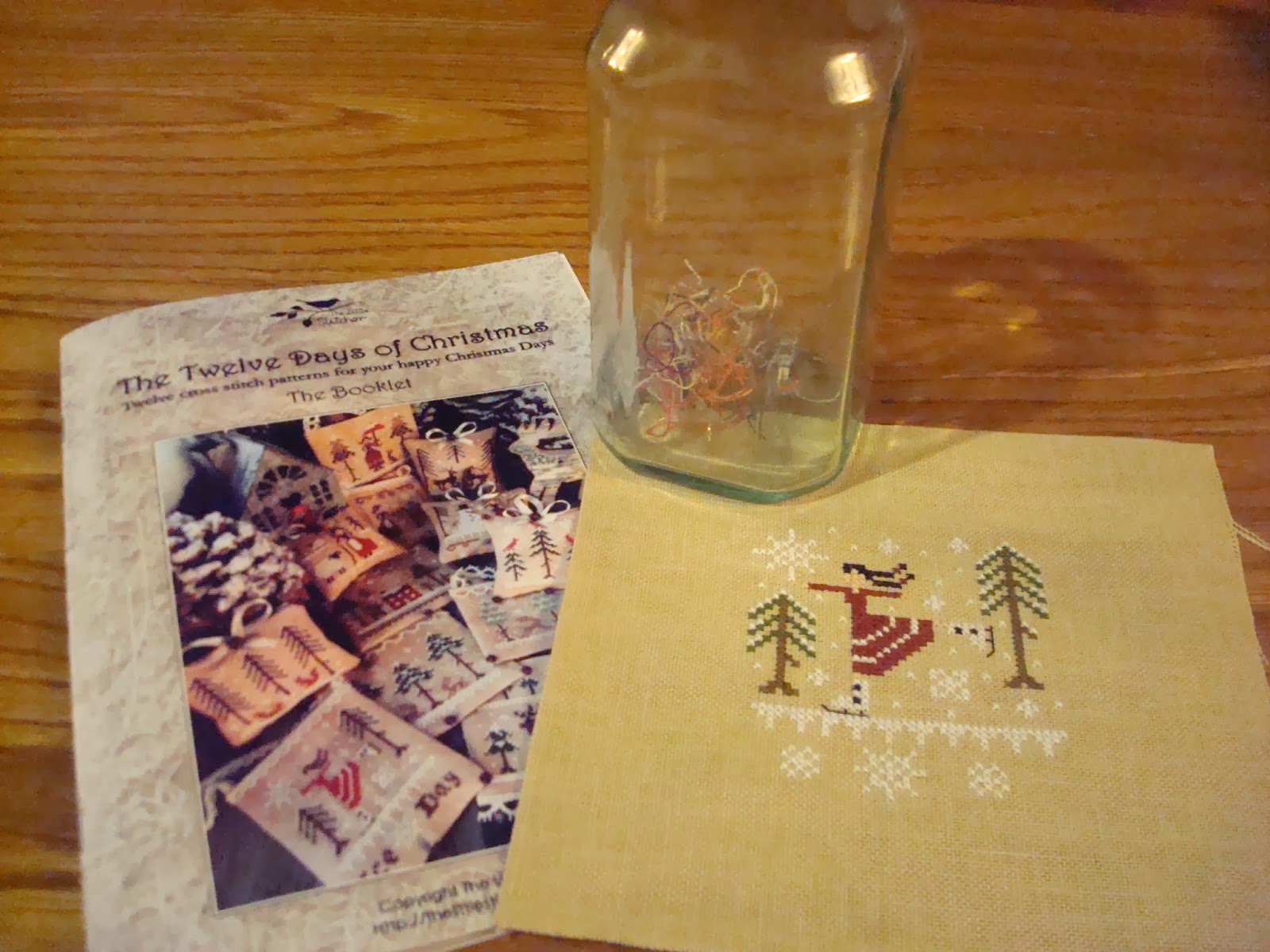 And here is a close-up: 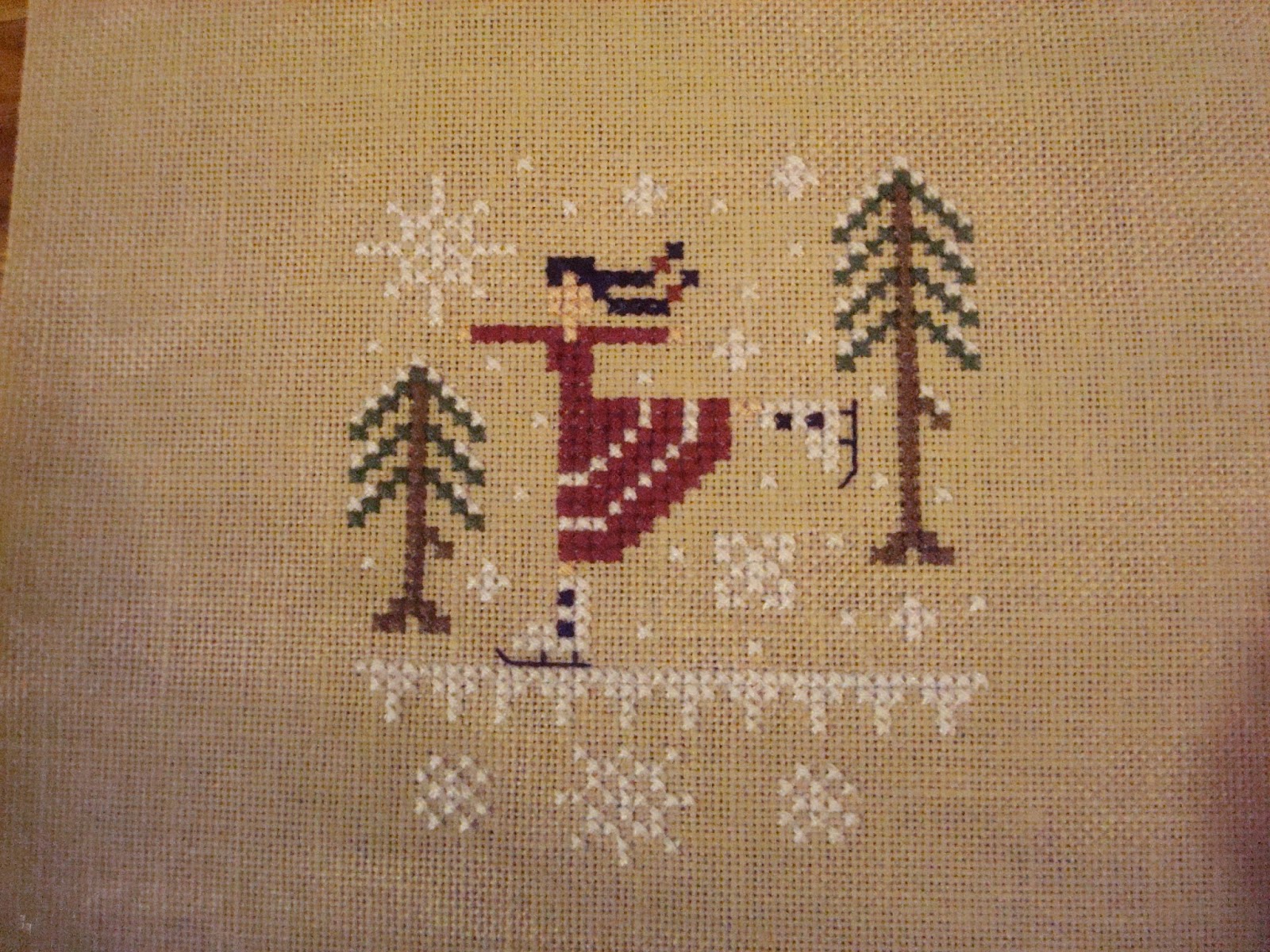 The charts are available as PDFs or as a little booklet in a choice of languages.  I chose the paper booklet and I am so pleased I did because it's beautiful, very nice quality too.

To celebrate the TUSAL of Ice and Snow I thought I would attach some photos of real Ice and Snow: 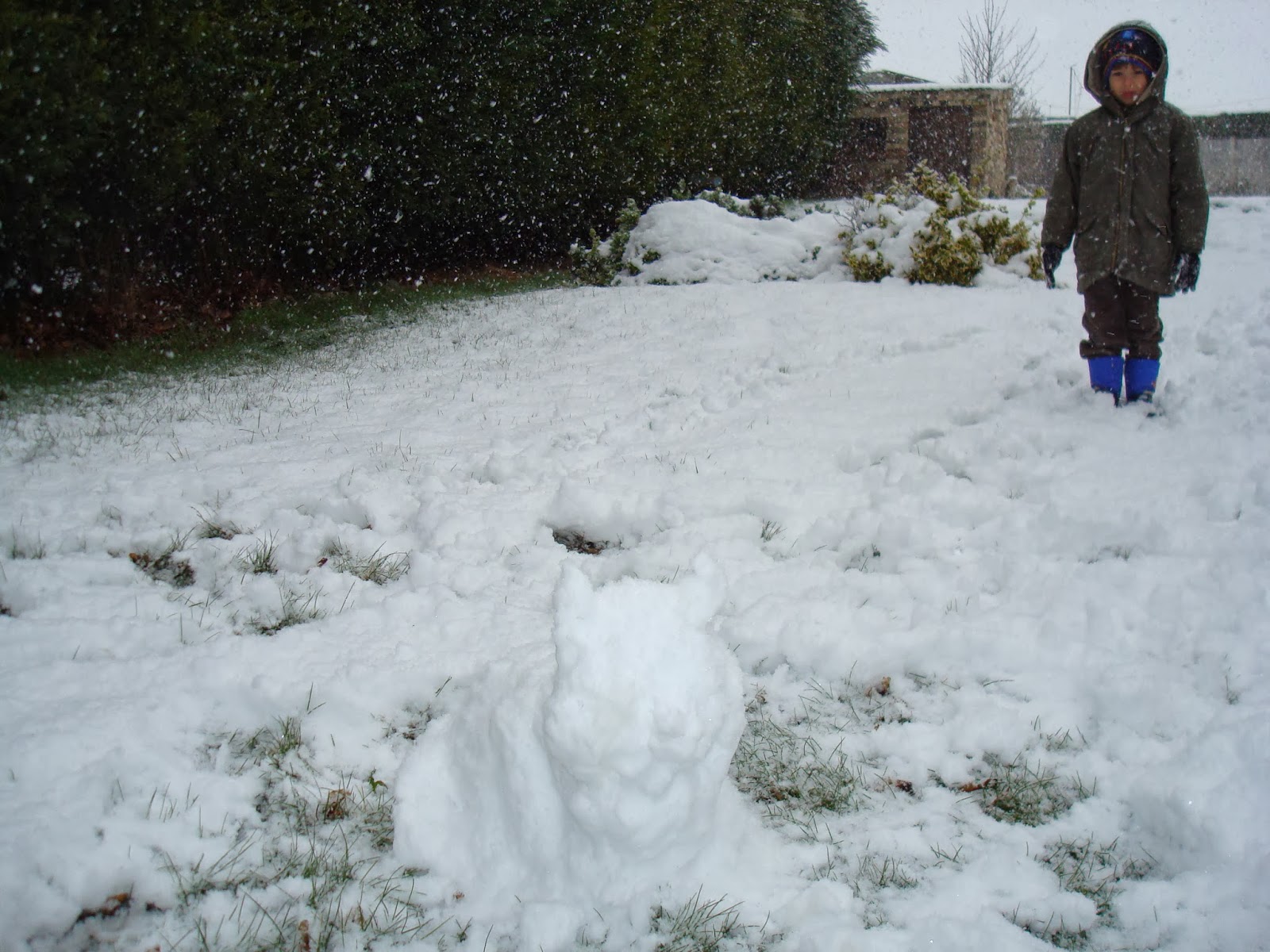 This was taken in April 2008 (yes April!) and shows The Large Boy when he was a Small Boy and his Snowcat. 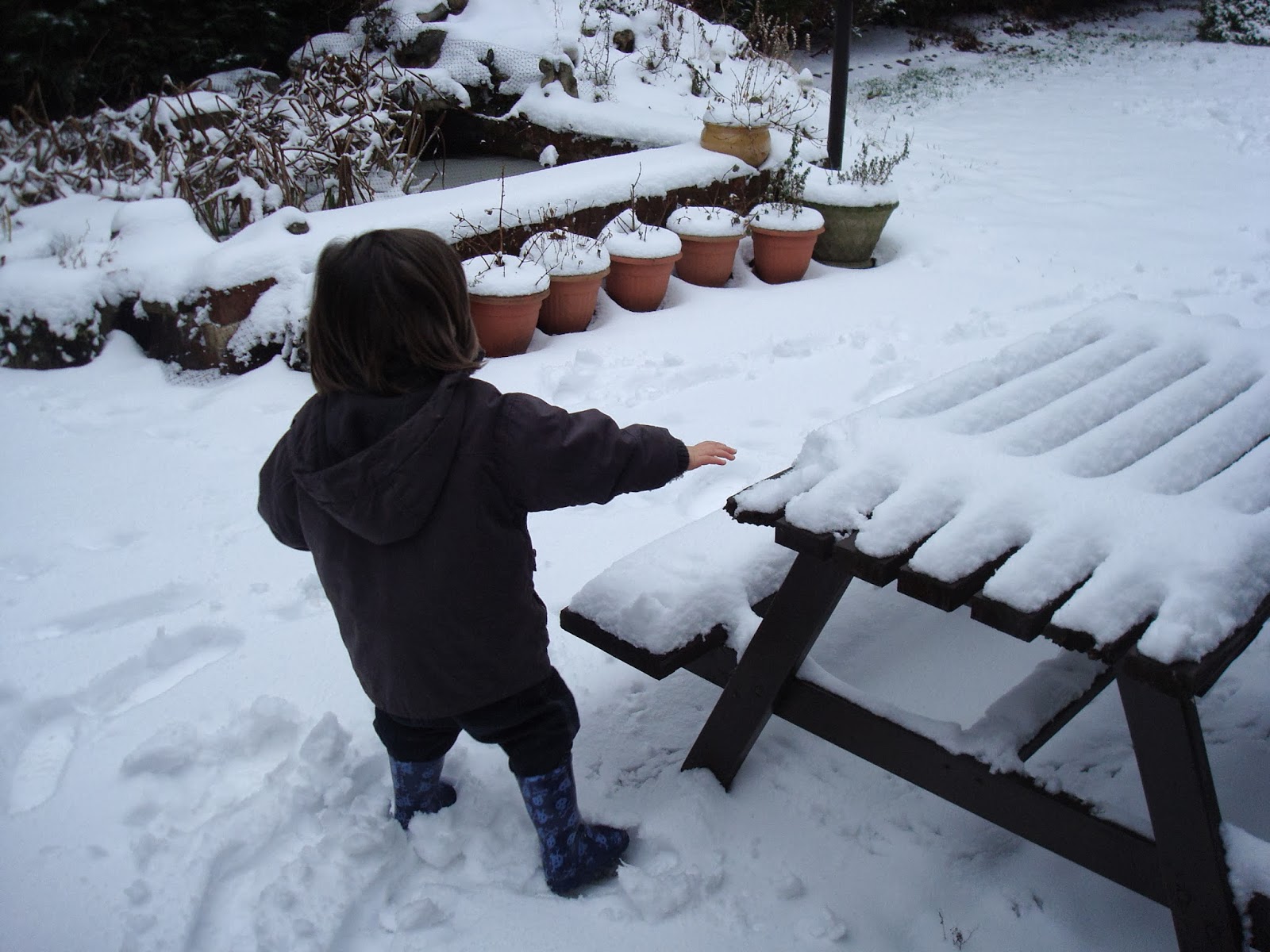 This is February 2012 and The Small Boy discovering Deep Snow for the first time. 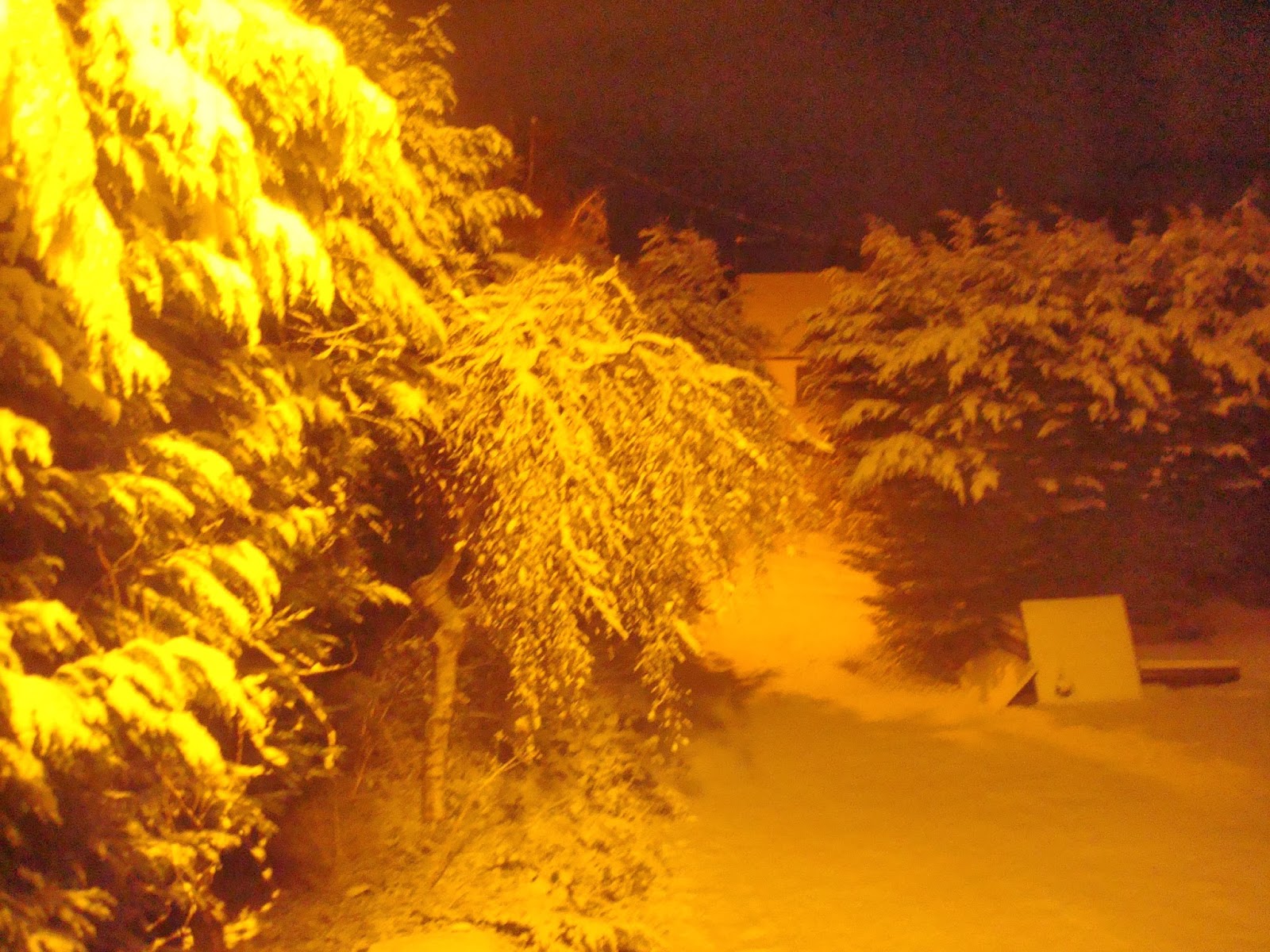 In her little description of The Day of Ice and Snow Laura suggests we "cut out paper festoons in the shape of snowflakes".  I don't think these are quite what she had in mind though: 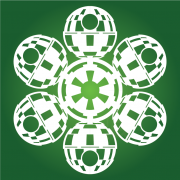 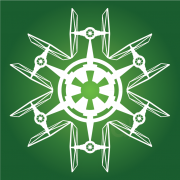 I hope you've enjoyed the TUSAL of Ice and Snow!

Finally, another mention for my Secret Stitching Sweetheart Blog Hop.  Click on the heart photo to the right and scroll down to the bottom of the post for details of the Hop!

Posted by Jo who can't think of a clever nickname at 19:04

The skating maiden is adorable. great pictures you shared. I recognized the snowflakes immediately. I was thinking of doing one up, but golly, those take a bit of time and patience and I couldn't convince one of the boys to do it either. ;)

Lovely stitching and TUSAL.
Great photos of your boys too.
Thank you for visiting my blog. I have followed your advice and I hope I am a reply blogger now and thanks for the tips.
Bye.

Ohh I love it, you did a great job on the skating girl. I so much still enjoy these patterns which I made into cushions.

I love that design! Gorgeous. Please talk to Colin and let him know that I REALLY want the chart for my birthday. He obviously didn't get the message for Christmas...lol.

I love the snow and I REALLY, REALLY want some. I am so jealous of the US where it seems the entire country is covered in it!

Lovely stitching, it is a really sweet pattern!

I have never seen this chart! And I LOVE it!!! I think I might have to poke around and get myself one as well.

love the look of that pattern and cooo we saw lots of snow today while at work ...luckily it didn't last ... love to see the wee ones out playing in it :) love mouse xxxxx

I love your finish it fits right in with all of the snow and ice this winter.

This book by The Little Stitcher has some very nice designs. Ice snd Snow looks so lovely. And I can easily understand why you don't want to stitch it in April when it's spring, lol.

Lovely finish - I have this pattern to start and I'm hoping for many finishes.
Great ort report and thanks for the snow fix!

Love the design and really enjoyed seeing the snow photos. The snowcat is great!!

Ice and Snow...more coming my way this evening :)
LOVE your ornament finish!

What a pretty ice skater! Love your snowy pictures too...though I am tired of looking at the cold white stuff.

Sweet little stitch you started Jo! I like the ice skating queen! Your boys are adorable and look like they had a ton of fun with the snow...snow's always exciting as a kid and still for me now!