Progress on my Two New Starts

I've made two new starts recently and due to the End of Year Round Ups I haven't really had a chance to show them off!

Here is the larger one which I started on 23rd December and have stitched on every day since then: 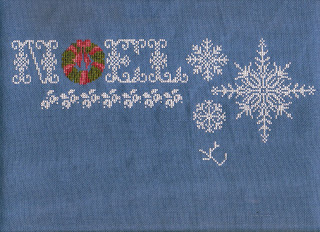 The design is called Noel Blanc by A Mon Ami Pierre.   I won it in a giveaway by Kathy Ellen of A Stitcher's Heirlooms quite some time ago!  The fabric is a 32 count  Linen called Millenium Blue and is this colour in real life, unlike the rather grey in the previous photo.  The majority of the sampler is stitched in DMC White except for the wreath, some mistletoe and a holly spray.

I loved stitching the letters, but the little flowers in the border below were quite tedious!  There is still one more to go.  Then there's another snowflake and a sleigh and I'll be just over a quarter done.  Those unfinished antlers mark the centre spot.

The next piece is a day time small stitch by Just Nan, the companion to Lady Scarlet's Journey; Lady Scarlet's Christmas.  This was also a gift from a fellow blogger; Shirlee the Easily Influenced Stitcher.  Clever Shirlee managed to pick a JN that I didn't have!  I was also lucky enough to have a ladybird charm in my stash so I don't need to buy one.

Here is my progress after 4 days of stitching: 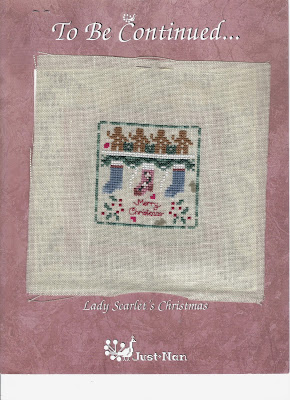 I'm stitching this on 28 count Platinum Linen.  I have made some minor changes; the blue stockings were charted in 930 which is very dark so I switched to 931.  Which means there isn't so much contrast between the toes and heels.  I'm using 915, 916 and 917 for the red ladybirds, berries and lettering rather than 902 because that seemed very dark as well.

I have updated my sidebar to show all the links for the current SALs and Challenges I am doing this year.  As well as the TUSAL, the WIPocalypse, The Smalls SAL, Theme-a-licious, IHSW and the Scarlet Letter Year from the past I am doing some new Challenges.

First is Stitch from Stash by Epic Stitching.  Here we have a limit of US$25 per month to spend on new stash.  I can convert this is £15 or use the handy local currency rule of £25 since she recognises threads are so expensive here.  I'm going to try for the lower amount.  I can exempt my magazine subs, my threads of month club and any gifted money.  I can also do stash exchanges as long as no money is involved.  Postage is exempt too.  I can also carry over unspent money from one month to the next ones or even borrow from future months.

Then there is the Hallowe'en Ornie SAL.  This was run by Lainey last year but she was unable to continue this year so I offered to step in.  I have chosen some themes for the various months starting with a free choice for January so you can catch up on anything you didn't stitch/finish last year.  If you enjoy Spooky Stitching please do come and join us.  There is no obligation to stitch every month, I didn't manage it last year!

Finally there are some designer SALs, Just Nan run by Zeb and my own Primitive Hare Spooky Countdown (starts 31st January) and The Little Stitcher 12 Days of Christmas (starts January anytime).  I ordered the paper booklet from Laura rather than the PDF because I like proper charts and our printer is out of ink as usual.  It arrived in a mere 2 working days from Italy and is so gorgeous!  Well worth buying.  I will do a proper Show and Tell when I start stitching.

Posted by Jo who can't think of a clever nickname at 19:15

Both of these are great!

Love the blue fabric, that's going to be so gorgeous.

Whew on the local currency! Very helpful! I joined too, going to be interesting! Lovely starts!

The white Quaker snowflakes look so nice on the blue fabric! Great color changes on the Just Nan piece that is so cute! Have a great stitching year with all your SALs and challenges!

Noel Blanc is gorgeous. I love how that wreath looks.

The snowflakes are growing nicely.

Gorgeous stitching Jo! I love the white on that blue fabric!
I want to continue with the Halloween SAL :) Even though last year was an epic fail for me!
Have a great week!

I love both your new projects! That white on blue really is gorgeous, especially with that splash of color in the O.

So nice to see the great progress you made on your two projects.
I also joined the Smalls SAL and the Stitch from Stash group, both groups that I can handle. I was thinking long about the Halloween ornie SAL but it might be too much together with my Year of BAPs plans.

Both pieces are very pretty!

Both look very nice!! The first one is very pretty !!

They're both lovely! I bought Noel Blanc from AMAP themselves at the show in Paris, so I saw their model and it blew me away - it's one of their best designs imho. Have fun with the SALs and challenges.

Ooooh, loving the coloring of Noel! Love seeing all your roundups from last year.

Good luck with the Stitch from Stash SAL. Do you get to carry over leftover amounts?

And as we all know, personalising a design to suit our tastes is what makes it so much more special :)

Love your Noel. I'm not doing any challenges this year = no pressure?? But I am stitching from my stash of charts and as I have the next three days off work will hopefully update my blog. Thanks for your update.

I missed the local currency thing - thanks for posting about it, I've signed up too.
Love the new starts.

Both are absolutely lovely!