I have to be honest, I'm not into the whole "stitch a different thing every day " lark, I'm more of a OAAT gal.  But for Heather I have to make an effort, especially as February didn't figure too well!

So far I have stitched on the following projects:


This is Dragonlet 3, along with his Three French Hens: 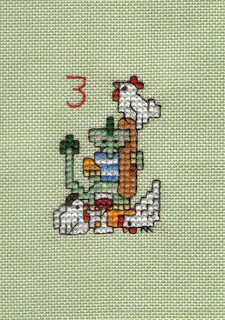 The Dragonlets are a Facebook exclusive series from Dragon Dreams and are just so cute!

This is Michael so far: 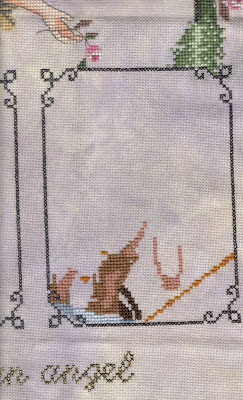 Not sure about that dark tan colour but it is the one in the key.

Of course the big news of this week is the recent announcement that Google Reader is disappearing as of 1st July 2013 due to it being "little used" according to Google.  Well apparently every blogger and stitcher does actually use it and is rather concerned!  There are a number of alternatives including Bloglovin' that several people have signed up with already and also Feedly.  I've had a very quick look at both and Bloglovin' seemed to be the most newbie-user-friendly of the two.

I'm going to wait and see if Google do a u-turn before spending too much time changing.  One question, can you follow any blogs on Bloglovin' or just those blogs signed up for it?

There is also a petition to try get Google to change their minds, click here for the link.

Finally, it's a short post because we are in the process of changing our internet provider and the very day after we requested the transfer code our modem mysteriously stopped working!  So we have a dongle with a small amount of credit and limited time allowed.  Ah, modern technology at it's best!

Posted by Jo who can't think of a clever nickname at 18:14

Wow, you have a lot on your plate! I also prefer to stitch just one project at the time but this year I've got sucked in into SALs...

Congrats on finishing the third dragonlet - he's so cute!

I too generally like to focus on one project at a time, but this year I got involved in 3 SALs.

Great stitching! I never use Google Reader. I find it very annoying. I just click on the posts from my main page.

Jo, the dragonlet is so cute and cant wait to see Michael completed, it looks lovely :)

Oh, you dod great so far with the March madness! The dragonlet is super cute, just like the rest of the series and I can wait to see how Michael turns out too. As for Google reader, I really hope they rethink it! I signed the same petition yesterday and I will wait and see what happens...

I read the posts like Shirlee and Marly, just right from the dashboard. No reader of any kind.
I'm watching Michael.

I'm a new follower of your blog.
Your stitching is lovely! a very sweet dragonlet, and I love your monthly cats.

Love all your stitching Jo! Loads going on :D Mmm, Bloglovin' is easy to use but I'm still not quite sold on it. I love my Google Reader and there are some blogs, like my designer, foreign blogs, I can just scroll through. With the Blog Lovin', You can't scroll through. Instead you have to click a button that says "marked read" which I find tedious. I have the same thoughts as you though about following new blogs. If you find anything out let me know k!

I just use my blog roll to comment but does seem a bit much of Google. Sorry about the lack of technology!

I appreciate your effort. =D That little dragon is adorable...I love 'is wee leetle baguette! I may have to sign up for Facebook just to get these...and then delete my account immediately, LOL!

Bloglovin should let you see all blogs, whether the blog owner has ever signed in or not. Their reader is, at its heart, just an RSS reader like Google Reader. Techno-babble, but RSS feeds are just out there, and any one can consume them (I would compare it to web pages and browsers, almost...if a web page is out there, you can see it in any browser. Whether it looks the same or not is another discussion entirely, of course!)

Also, as anecdotal evidence, I was able to search and find It's Geek to Me before I "claimed" it as my blog.

Technology can be such a pain sometimes, i hope you new provider sorts you out quickly.

Well done on your projects so far this month, i couldn't contemplate that many WIP's, i would be going mad...well madder than i normally am lol.

I hate change on the computer, i'm waiting a while too to see what happens, i signed the petition and am keeping my fingers crossed they dont withdraw it.

You're doing we'll with your March projects, those dragonlets are cute.

Hope you get your Internet sorted soon. I've gone for Feedly as my reader replacement, they reckon over half a million people have transferred to them alone so it does make you wonder what Google thinks is a low number of users!

Nice stitching. Hope you gt your internet sorted out.