As part of the 12 Days of Christmas in Blogland activity organised by Evalina, I had not one, but seven Giveaways on the same day - Epiphany.  So that didn't make the draw complicated at all!  I used the untechnical method of putting all the names in a cup and getting the large boy to pull them out.

Without further ado, here are the winners:

I was so flattered by the number of people who wanted the stitched ornie, especially given my self-proclaimed lack of finishing skills!  So I've decided to invite everyone who entered Giveaway No 6 to send me an email with their Birthdate and address so I can send them a card on their special day.  You know who you are, send me the details!

The booklets, kit and metallics will be posted out after the 20th (payday!) and the two stitched pieces sometime this year hahaha.  Thank you to everyone who entered.

The second part of this post is dedicated to Theme-a-licious, Jardin January.  Hosted by Heather, click on the above link for details.
I've been stitching on Green Goddess by Joan Elliott and here is the progress so far: 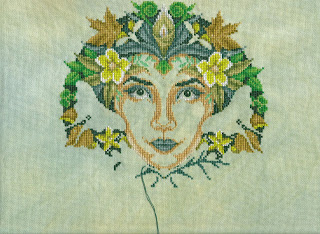 I'm "rounding" her face out with fractionals.  My Mum saw the piece and didn't like the "stepped" look using whole stitches.  It's one of my only criticisms of Joan's work, her skin is often "stepped" and blocky.  I much prefer Nora Corbett's limbs!! 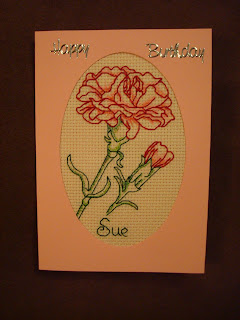 This also fits in with the Jardin theme.  It was actually stitched in December for a Birthday Card Exchange.  We received the list of Birthdays on 20th December and the first one was on January 1st!!  So I had to work extra quick to get this one out on time.  It's a method I've used before, just stitch the backstitch then colour in the shading with felt-tipped pens.  The design is from WOCS, part of their Year of Flowers.  I've used aida because it's easy to colour.

And finally, just when I've made the decision to "Stitch from Stash" this year, Just Nan go and send me an email with a link to this Snow Flowers.  Why would they do that?  Why?  Don't they know I have enough Just Nan charts for my Just Nan-a-thon already?  Anyway there's a little poll in the top right of my blog - how many of my existing Just Nans do I have to stitch to justify buying this new one?  Please help.....
Posted by Jo who can't think of a clever nickname at 17:01

I've voted for 1 or 2. My theory this year is that I can have a new start for every 2 finishes. I would hate to have you wait too long to get it as it's a beautiful design.

I love the way Green Goddess is coming on. Can't wait to see it done!!

oooo well done to the winners :) and lovely progress on your green goddess and cute card tooo :)
love mouse xxxxx

Love the card and the idea of only doing the backstitching is brilliant. The Goddess is looking great. Congratulations to all the winners.

Love the idea of jut backstitching a card, looks amazing. Goddess is stunning too

congratulations to all the winners..
love the card so much..so sweet..
the goddess is looking stunning..,
sending you hugs
cucki xx

You are making great progress on the GG and I love the idea for the birthday card.

Congratulations to all your winners and so kind of you to do a giveaway like that!

Your goddess is looking wonderful!

Great job on the card!

I really like your progress on Green Goddess.
personally I prefere Nora´s faces to, but maybe you just need to wait and see how she looks when she´s all done ?
I often think that it´s not going to work out, and then when I see the end result it often turns out just right.

Yay, thanks so much :))))
The outlining idea is just awesome and it looks great! And good luck with your Just Nanathon! I've never stitched one of their patterns, but they're all so yummy!

Great progress. I love the way you did the card. What a neat idea.

Congrats to the winners and lovely progress on Green goddess. I love your card, too. thanks for the offer to make a Birthday card for the No 6 devotees. I will send you my birth details later tonight.

Wonderful progress! Just Nan can be addictive, that's for sure : ) Congrats to the winners! I've sent you my #6 info : ) Blessings, Shirlee

Great progress on Green Goddess. I'd say 1 for 1 on the JN dilemma, then you aren't increasing your stash at all, just maintaining it ;)
Congratulations to your winners

Great going on the goddess, and the card is so pretty!

Congratulations to the winners of your generous giveaway. What lovely progress on Green goddess.

She is looking great :)

What a great job you are doing on the Green Goddess and the cute card.

None! Break some rules!

LOL...I thought the same thing when I got that email...what is Nan trying to do to me!! =) Your Green Goddess is looking lovely and I really like your idea of rounding her face stitches. I think she'll be beautiful!

Congratulations to the winners! Love the progress on your Green Goddess--very pretty! The card is very pretty. I have yet to stitch a card. I'm sure the recipient loved it!

Congrats to the winners!!

Hehehe, I'll email you the birthdate, but let's do an ecard instead. Save some money and save some trees. :)