Remember way back when I stitched my first Travelling Pattern?  It was Shakespeare's Peddlar's Count Your Blessings and I asked people to tell me who their Stitching Blessing was.  Freddy's Mama (aka Kirsten) told me about her friend Irene and as Kirsten's name was pulled out of the hat I decided to make a little something to thank her "blessing".

The design and stitching was simple.  I like the quote "Stitching Friends are Friends who Count", it's a nice pun and a lovely sentiment.  I laid out the quote on graph paper in an invented font and added the symbols from the Travelling Pattern (anyone know the name for those 8 leaved symbols?).  Then I decided to make it into a padded ornament.  I stitched round three sides inside out then turned it the right way out, so far so good.  I stuffed it and slip stitched the final side.  Now I have two nice corners and two different corners.  So I decided to put cord around the edges, but I should have buried the cord ends inside the ornie before sewing it up.  So I was left with two ends.  Which I sewed together and tried to hide with some gold braid wrapped round them!!

I sent the ornie off to Irene with an explanation that this is my first and probably only ornie!  It arrived yesterday and as I remembered to take a photo before it went off to the USA I can show you all, here it is: 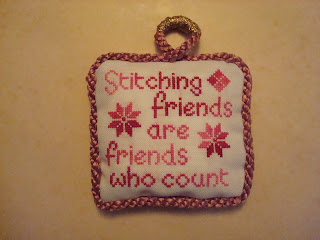 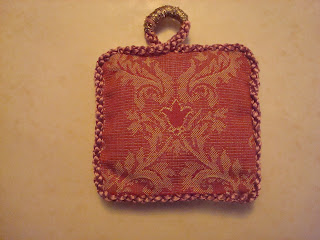 The back is made from one of the fabric samples I got earlier this year.  They make lovely ornament backings so I will include them with any giveaways I do so people who actually like making the things can do so!!  The thread is a variegated DMC.

I hope you're all enjoying the Advent Calendar and hopping over to the blogs to see what people have to say.  Isn't it funny how similar Day 2 and 3 are, and also that Joysze and I both chose the "hutch" designs to show?  We stitchers have so much in common.
Posted by Jo who can't think of a clever nickname at 20:06

Lovely ornie Jo. The font is pretty and I like your choice of backing fabric.
Really enjoying the advent calendar:)it was an inspired idea.

it is really a very beautiful ornie..i love the wording so much..so true :)
keep well..have a lovely weekend xx

A very cute finish and design. I do like how you dealt with the join on the cording, I usually end up with a bump somewhere around the edge. I also really like the backing fabric you chose and how it brings to mind, at least to mine, the wallpaper of your blog.

The backing is gorgeous fabric and the finish looks great to me.

A beautiful ornament you stitched for Irene, love the backing fabric
Take Care!!

Thank you Jo for stitching this for Irene. It's lovely. She was very touched to receive it.

Loving the advent calendar! If there's a door left, I'd love to take part...

What a nice thought, and the ornament is just great!

Hand made gifts are the best! They're just so unique and individual, and you did a great job charting, stitching and putting it all together. I like how the backing fabric looks a lot like the background of your blog!

What a lovely ornament Jo!! I love that backing fabric. It's very antiquey which is my favourite kind of fabric!!

Lovely job on the ornie

Your ornament is gorgeous Jo. What a lovely idea.