As you are all aware I'm an avid stitcher of A Dark Alphabet designed by Julie of In the Company of Friends.  The Large Boy and I have been happily guessing each letter as it comes out (every 2 weeks or so) but we would never, ever have guessed "U" not in a month of Sundays.  We thought "Undead" was the most likely choice.

But No.  Julie excelled herself and frustrated Becky who has to do the research and write the blog post by coming up with:

Urma who loo?﻿  Yes, Urmahlullu, the well known Mesopotamian Protector of the Toilet.  Half Lion, Half Centaur, and the colour of an Andrex Puppy.  (Do you have Andrex puppies in the States and Europe?  Go Google if not.)

Now, the Large Boy is getting a classic education - Greek Gods, Roman Gods, Viking Gods, Christian God and other comparative religions.  But Gods of Ancient Mesopotamia do not seem to be on the National Curriculum for Key Stage 2 in England.  Shame really, because it's rather interesting.  See the Note of Friendship blog for more pics and information.

And here he is in all his glory: 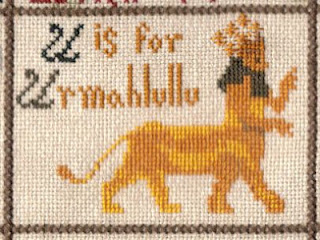 Talking of Dark Things, I know many of you are interested in the old Witch Trials and the poor women who were punished for being a little different to the rest of society.  You may find this website rather interesting.  It's written by a local historian I've known for many years and is absolutely fascinating.  It's all about two witches who were hanged in my town in the 17th century.  The pamphlet written was used to set a precedence in the Salem Witch Trials.  For me, the great thing about the site is that they've traced the accusers and witnesses, found where they lived and have posted pictures of the houses as they are today (or when they last existed).  One of the houses is currently the wool shop where I buy my DMC and ribbons!

The website is very wordy and I found it quite hard to read when the window was fully opened.  By moving the margin of the window so it is about 4 inches wide it becomes much easier!  I will mention this to Ivan when I see him next.  I'm sure he'd love some feedback so if you have any comments then please let me know and I'll pass them on.

Finally, Madame Muriel is currently pouring over her atlas trying to decide where to visit next.  You have until Thursday to put in your bids for her company.  Leave a comment on her last post here.

Posted by Jo who can't think of a clever nickname at 23:20

Oh hohohoho - U-Bend! Why didn't I think of that?

I have a confession to make - I didn't really read very far into the description of this guy, I just liked the idea of the half lion/half centaur, and it wasn't until Becky had done the research that I realized what I'd gotten her into.... Ah well - he is a handsome fellow, and he can protect my wc anytime!

We don't have Andrex puppies, but we used to have a similar product being hawked by snow-white kittens. I had thought it was Cottonelle, but when I googled it, another puppy like the Andrex came up, so I guess I was wrong... Or google just thought I liked looking at puppies, hahahahaha

hahahah Great word :D I don't even know how to pronounce that in english! LOL ;)

I'd never heard of him, but he is very handsome, all the bad guys are I find ;)
I'm guessing vampire next?

Totally fascinating post! No Andrex puppies in Downunder. Your alphabet is coming along well!

After U I can hardly wait to see what X, Y, and Z are!

HAHA! Urmahullu! What a name! He looks so cool!!

ROTFL!!!! How fabulous. Who knew there was a protector of the U-bend??

We don't have Andrex in the states, but looking at its Wikipedia entry, I see it's owned by US company Kimberly-Clark. And our "Kleenex Cottonelle" toilet paper does, in fact, have the puppy on its packages. I remember a commercial with the puppy a looooong time ago.

An exciting looking block. He was no help when my pipe had a leak lol.
I always thought wool and stash shops cast some sort of spell on you when you entered them!

I've had such a lovely time reading over your blog this evening, but almost regret it now. I desperately want/need to stitch the Dark Alphabet now. LOL! I loved it as soon as I saw your WIP photos, but love it even more after reading the story behind it. It's hard to believe Lisa has been gone for a year already. I was friends with her for several years online and still can't believe she's gone. :(

Could have NEVER guess that word in a million gazillion years. ;) Looks great, though. :D

That is just the best idea for "U" ever!