I've been inducted into a Stitcherhood!  Not the Lizzie*Kate one I've been following since it started 5 blogs ago but a new (to me) one.  Now I always try to follow my followers in return, so when Nataly became my follower I popped over to her blog to return the favour.  There I spotted her passing the Travelling Pattern onto Erin.  So off I trot to follow Erin, comment on the TP post and it's coming to me now!

The pattern is by Shakespeare's Peddlar and is Count Your Blessings which is a great motto to live life by.  So watch this spot.  It will probably take a week to get here and a few days to get stitched depending on how much we are out and about each day then it will be off on it's travels again.

It's always nice to find new blogs because I really don't follow enough (ha!) and I do try to leave a comment saying how/where I found them.  This is a hint to my followers who haven't introduced themselves yet!  I'd love to "meet" you via your blogs so leave a comment.

Real World Question: when you're referring to something an online friend has said, what do you say "A friend of mine told me..." "An online friend ...", "one of my followers..."?  Saying followers makes me feel like Brian in The Life of Brian!  "She's not the Messiah!".

The Dolls House in the last post was super-popular so I may be sending it on it's way to a new home.  I've been watching my Follower's List grow so thought either 100 followers or my Birthday would make a good occasion for a Giveaway, whichever happens first.  My Birthday is in September so it won't be long either way.

Stitchingwise I'm working on a Round Robin for Sophia, it's a Teresa Wentzler band sampler and is GORGEOUS.  I'm also stitching I and J for the Dark Alphabet and have just completed a cat which has gone off to be included in a Cats Protection League raffle and a freebie for a new (to me) forum.  This is the Needlecraft Haven.  They have a monthly freebie challenge.  Christine chooses a free chart from t'internet and each person stitches it then there is a big Reveal on the last Sunday of the month.  July/August is ongoing so I have to wait til the end of August to show you.

There are no photos again, so I must find something to show you. 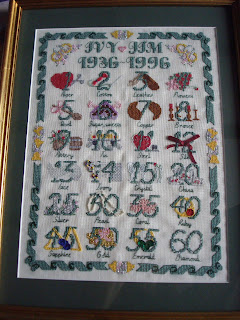 As the family link was so popular last time, here is the sampler I stitched for my Grandparents' 60th Wedding Anniversary.  They have both passed away now so it has returned to me.  It's currently in storage but comes out everytime someone asks what a particular Anniversary is.  We've just celebrated Flowers.  They had 60 years and "never a cross word" hahaha.  Lots of bickering kept their minds agile!  They used to spend alot of time arguing over who had owned each corner shop in each street, or the exact order of the names of a series of narrow paths called "The Scores" in our town.  Some of which no longer existed.

Finally a reminder of a special service this blog provides - contents pages for my favourite magazines to help you decide whether to look for them in your far-flung countries.  World Of Cross Stitch just added a little belatedly (oops).  Look at the tabs at the top.
Posted by Jo who can't think of a clever nickname at 19:33

Hi Jo
Thanks for the cat it is gorgeous.Thank you so much!!
The forum that does the charity squares/quilts is A Crafty Natter on YUKU

Your anniversary sampler is just beautiful! 60 years is quite an accomplishment with "never a cross word"! My parents said the same at their 50th - must be memory loss! ;)

Grats on the traveling pattern. That's wonderful news! I call my internet friends friends, but sometimes I'll say, my blogger friend, or my email friend to clarify what the level of communication is between us. Interesting question.

That is a lovely sampler and I could have done with consulting it on many occasions :)

Such a beautiful sampler. Very lovely!

Congratulations on being the next stitcher of my traveling pattern! I've been trying to keep the stitchers list updated on my blog:

I usually refer to you guys as "my friends" or "my blog friends" when speaking of you.

I got a nice email from Zlatina -Hi, I'm new but I decided to say hello anyway. I just found your blog - I'm stitching the 3 dolls from Joan Elliott's booklet and an image search brought me to where you show them done. I like your blog very much. And you are a rock chick and fantasy fan, nice! I also realized browsing through your albums that you are the same stitcher who did that amazing interpretation of Joan Elliott's angel... so I found the blog of a celebrity, imagine that :) Thank you for all the interesting postings and keep up the good work :)

What a gift for your grandparents!!! They must've felt so loved when they received it and how nice that it's now back in your loving care.

I call you guys my "blogging friends." :D