As I was trying to get ahead of my teachers' stitching which must be finished by the end of term﻿, I'd got behind with the Dark Alphabet.  So I had two squares this session.  The first is F is for Furies, 3 women you do not want to meet on a dark night.  According to Greek myths they were Alecto, Tisiphone and Magaera, the children of Gaia and Uranus.  Now there are three names which must be due a revival, I've heard stranger ones than that recently! 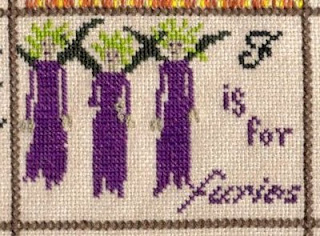 My Furies are stitched in the recommended colours except for the dresses.  I love the effect that tweeding produces but it's impossible with 1over 1.  So for the dresses I stitched the bottom /// with 552 and the top \\\ with 550.  It makes a nice knitted effect, especially as my over 1 rows have a "rib" when I stitch horizontally (it's noticeable on the C square too).  So my Furies are Fashionable too in their knitted tube dresses!

I have a "Fury" story to share, many years ago a close friend discovered her boyfriend was cheating on her.  She was house-sitting for him when the "other woman" called round to see him!!  She decided to get her revenge so I went with her to ensure she didn't commit any criminal damage and get arrested - caring friend that I am.  She did all the usual things; itching powder in the underwear drawer, mix the salt and sugar up together, wrote a nice long "Dear John" letter on the bathroom tiles in lipstick then used all the cleaning products up cleaning the bath!  But my contribution could only have come from an OCD Virgo - I took all of the CDs out of the cases then put them all back.... in different ones.  Can you imagine how frustrating that would have been.  Evil OCD laughter!!!  (BTW it's actually CDO, all the letters are in alphabetical order.  Because they should be) 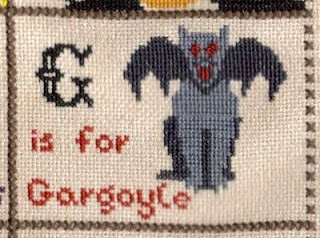 I have just noticed that I haven't finished my gargoyle's left leg!  I must stop blogging and go finish it at once.  How strange.  Also it is very hard to type with a wriggly 2 year old on your lap so you can only use one hand pecking the keys one at a time.  With two hands I can use 2 fingers and it's much quicker!

I have to share this with you all too - it's from Freddy's Mama of the "Stitchin' Addiction" blog, she saw it somewhere else and had to share too.  I'm sure you'll all agree when you read it.

And here is the finished Gargoyle with a completed left leg!  I stopped stitching late on evening and when I picked it up the next night I started on the light grey not noticing the unfinished leg! 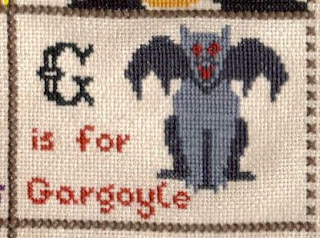 Posted by Jo who can't think of a clever nickname at 13:59

Both finishes are so cute. Congrats.
Thanks also for posting the link to the "Stitching Addiction"
So funny - so true

love those and the stories are great heheheh .. love the fact you went with her ..lol love mouse xxxx

Lovely! Can't wait to see the whole alphabet put together. And I've done that before, too - thought I finished something and then looked back to find... oh, wait...

Your blocks look wonderful! Just wanted to alert you to the fact that there was an error in the H block - which I've now corrected. So if you'd already downloaded it, please do it again. So sorry for the inconvenience!

Thanks Julie, I'm guessing it was the missing code for the triangle used in his hand?

Your post left me giggling. Not good when I am sat surfing the web at work (over lunch though)... I've been trying to catch up on my blog reading and you have some lovely stitching here - but the 2-legged gargoyle is my favourite!

These are so cute! I have never seen this before, can't wait to see more letters.

Hi Jo, it's new Jan popping over from Needle and Thread. What a cool alphabet! I love Halloween and this fits rights in there. Great stitching.