As I write this letter,

ten disgusting old men are prancing about all over what used to be the garden - before the geese and the swans and the cows got at it; and several of them, I notice, are taking inexcusable liberties with the milkmaids.  Meanwhile the neighbours are trying to have us evicted.
I shall never speak to you again.
Emily

Oh dear, poor Emily.  Although Joan Elliott's Lord-a-Leaping is rather joyeous and full of life he has enough decorum to keep to his own block and not bother the milkmaid above him.  He's clearly practising for the day Ribbon Gymnastics is a gender-neutral sport in the Olympics: 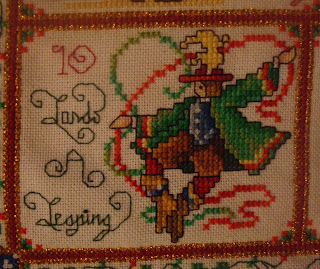 He has a few spaces for beads to be added.  So, sorry to Kerry, I have nothing for Theme-tas-Stitch Opulent October!

Here is where the piece was last month: 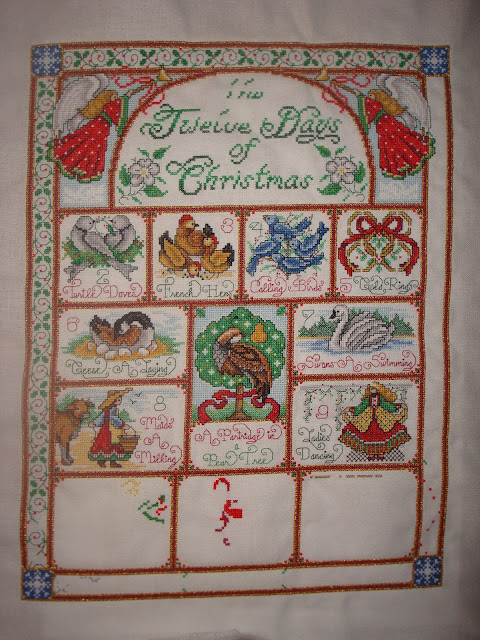 And here we are now: 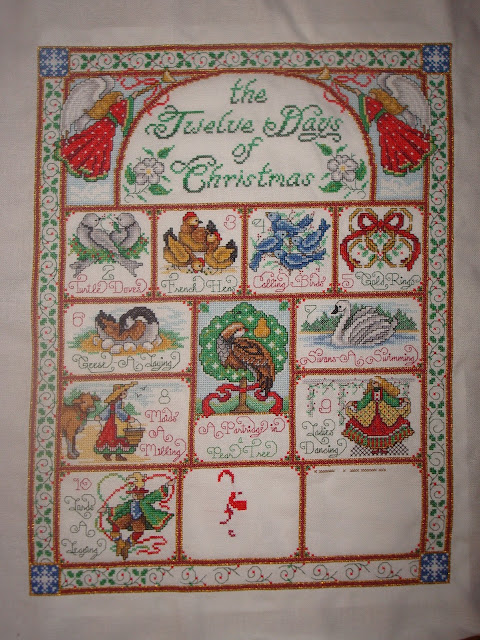 All that red in the Piper was stitched on the 11th and 12th Days of Christmas earlier this year so I have a nice headstart on that block. 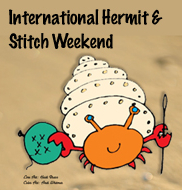 Those of you that have been blogging for a while now may recognise that little fellow as Hermie, the mascot for International Hermit & Stitch Weekend hosted by Joysze of Random Ramblings.  Joysze has not blogged for a while although some people have continued to hermit and stitch alone.

Well, she has resurfaced and has been persuaded to revitalise IHSW on Facebook.  If you'd like to join us, then just click on Hermie and it will take you to the group.

So what did I stitch for IHSW (or Numb-bum weekend as it is also known!)?  The next project in my Dark October stitching - Nora Corbett's Bewitching Pixie Raven: 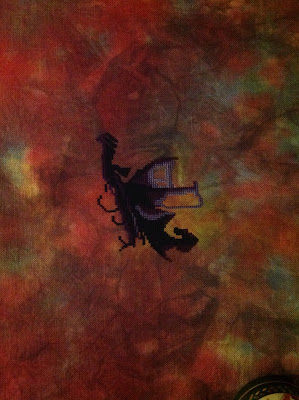 I used every setting on my camera trying to get a decent picture of the fabric and that one above is perfect - taken with the iPad!  Here's a camera photo so you can see the stitching better: 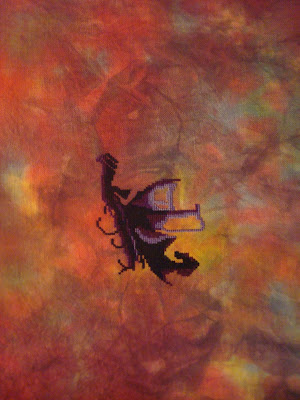 stitched on 32 count Belfast in Nebula by Crafty Kitten


Finally, there's still time to sign up for the Spookiest Hop on the Block - the Trick or Treat Hallowe'en Blog Hop.  All you have to do is leave a comment or send me an email.  I will send you a letter of the alphabet which you show on your blog on 31st October along with some spooky stitching.  We all hop around collecting the letters which will spell out a spooky word.

Posted by Jo who can't think of a clever nickname at 20:38

Love the 12 days ...it is wonderful. That fabric is beautiful. Sign me up for the Halloween hop.

The 12 Days is just beautiful! Looks like it will be finished before the big day!

The 12 days is looking lovely and right on track for completion.

hahaha! Now that Lord will always be practising for the Ribbon Gymnastics in my mind. ;)

12 Days is a big piece, and you're so close now. LOVE the fabric for Raven; very witchy! :D

That fabric is fabulous! I think I may have to stir up my dye pots...NO! I will behave!

Your 12 Days is stunning Jo. Love your pixie fabric.

Your 12 Days is looking more fantastic every time you post - and you're nearly done!!! Love the fabric for the other piece, it's just gorgeous.

(don't think I can commit to the hop as I never know how beat I'll be after work on any given day. :( I will follow the trail, though may be late!)

Lovely progress on this project.

Your 12 days is awesome. It won't be long and it will be finished. What a beautiful job you have done. RJ@stitchingfriendsforever

Oh wow, so close to finishing, it looks wonderful!
I LOVE the fabric, perfect for the Pixie.

Beautiful progress on your stitching. The pixie is just gorgeous indeed on that fabric.

12 days is looking fabulous..... love the ribbons! Gorgeous colours for Pixie, and what a start!
Sorry I don’t have any Halloween stitching ..... but I love to see other people’s!
Have a great weekend!
Barbara x

I like the 12 Days piece, really lovely and nearly finished. Unusual and bewitching pixie.

Oh my! I love the thought of the gender neutral ribbon gymnastics......he looks perfect for it :)

Oh yes, poor Emma. Lol. But the dancing lord looks gorgeous and very joyful. There are only two empty spaces on your Twelve Days now. And again I wish I had only a little bit of your being so organized, lol.

Nearly there with the 12 days now

12 Days looks fabulous as does the Pixie

12 days is edging ever closer - do you think it will be done by Christmas? Love the 'num-bum' weekend idea! x

Oh the poor Emily! I do fear for how Edwards courtship will end. Your stitching, on the other hand, does look great!