Tenuous Shoe-Horn for Your Loved Ones! 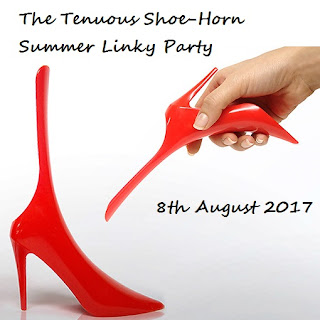 It's time for the Second Annual Tenuous Shoe-Horn Linky Party!  Like a Blog Hop, only less work for me as it's the Summer Holidays.

The theme this year is "Loved Ones", some of us have lost loved ones this year; people and furbabies; some people have been celebrating special wedding anniversaries, some have new babies or grandbabies and some have children growing up (too) fast.  So all you have to do today (or later this week) is make a post dedicated to your Loved Ones and show some stitching related to them, however tenuously.   Then link up below and visit some of the other participants.

My Loved One is my Nana, and my Grandad too!  Today would have been my Nana's 102nd Birthday if she hadn't decided to join my Grandad 17 years ago.  Here she is in 1967 when she was just a year older than I am now.  I'm nearly one year old in that photo, a lovely chubby bonny baby.  The other lady is one of her four sisters, possibly Hilda the oldest.  Nana was the 8th child of 10 siblings and youngest girl of the five. 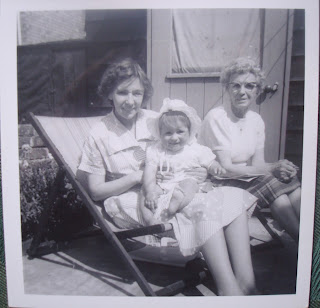 The family divided into two halves with the oldest boy dying at the age of 10 and the four older siblings having left home by the time the youngest five were growing up.  Nana shared a bed in the attic with two of her sisters, the two boys had one bedroom and her parents the other.

As her Birthday was in August, she finished school in the July at the age of 13 and didn't return in September.  The school leaving age was 14 then and you started work the Monday after your 14th Birthday.  Grandad was apprenticed to a carpenter and Nana went to work in the Lavender Laundry.

On their days off all the young people would promenade down the Promenade in their best clothes.  My Nana would be there with her sisters and best friends and my Grandad would bike past them hoping to impress my Nana and catch her eye!  "Here comes that boy on his bike again!"

It must have worked because they married in 1936 when Nana was 21 and Grandad was just turned 22.  They moved into a little rented cottage and shortly before the 2nd World War moved again to the house where they lived until 1994 and the move into sheltered accomodation.  That was the house where my Mum was born and where I was born and spent many happy childhood years.  Tiny with an outside toilet complete with oil lamp and spiders!

To celebrate their move into the lovely new flat I stitched them a Home Sweet Home sampler, which I have now inherited back: 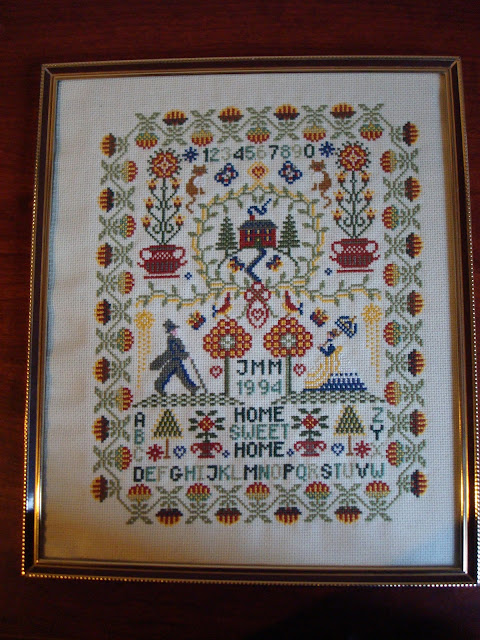 The design came from a library book and is very 1980s in style!  I stitched it again as a Wedding Sampler a few years later with some small changes.

Two years later Nana and Grandad celebrated their Diamond Wedding Anniversary, 60 Years of Wedded Bliss with never a cross word!  Haha, there was plenty of bickering though!

To commemorate this milestone I stitched this sampler from Cross Stitcher magazine (April 1995 issue), changing the colour scheme to green to match their living room: 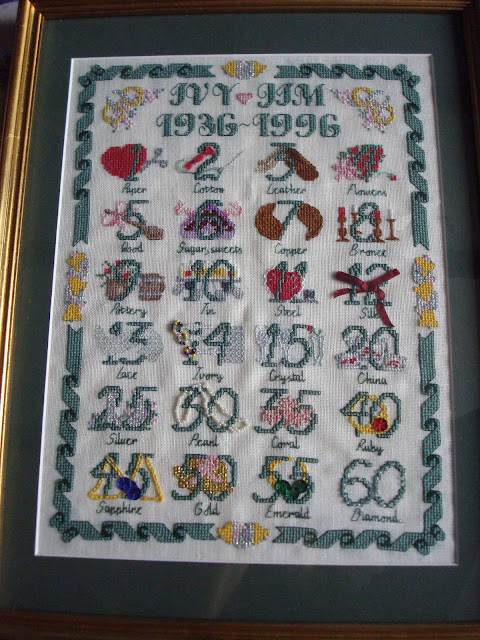 I'd been stitching for three years at this point and loved this sampler with the metallics, beads and other embellishments for each annivesary.  I also inherited this sampler back.

Grandad passed away suddenly and peacefully in his sleep in 1998, we'd just spent the weekend as a family at the local airshow and he'd seemed fine.  Walking up and down the seafront, having a lovely time.  Nana coped in the flat with the help of my Mum and various Carers coming in each day.   "I only want smiling ones, no miseries!"  Eventually her failing health saw her move into a residential home close to my house so I could visit on my way home from work and at weekends.  She passed away, quietly and peacefully having "taken to her bed" as they say, and refusing to get up.  She was ready to join Grandad and her beloved sisters once more.

I sat with her at the end, stitching on this project which just happened to be my current one.  I was a OAAT stitcher back then. 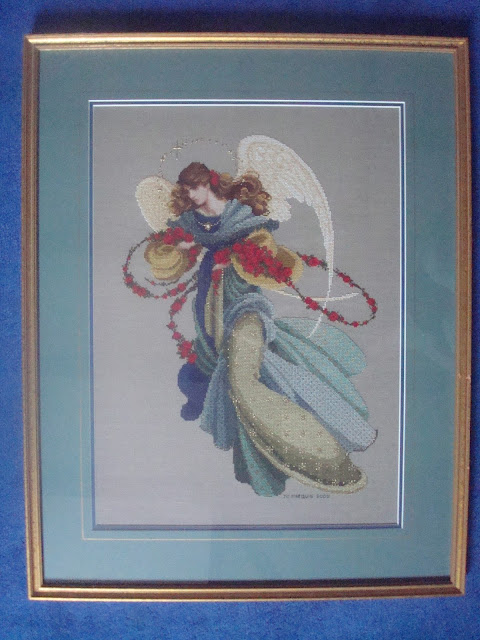 Angelica by Lavender & Lace
(serendipity at work once again, remember the name of the laundry?)

I have so many fond memories of my Nana, I could write a book, so many little anecdotes that say a lot about the times she grew up in.  The time she hid in a neighbour's yard because there were cows coming down the road, she was terrified of cows!  The time her Mum took in Barnardo's Sailor Boys and wouldn't let Nana and her siblings eat the special tea because "it's for the poor children".  Three sisters all dating at the same time and saying goodbye to their boyfriends in one tiny backyard while their father was clock watching to call them in at curfew time!

And at the end, telling the Carers that "she brought me up" because I used to have my lunch there instead of school dinners.  Always calling us by the wrong name.  My sister and I swapped names with each other but my brother got the cat's name.  Or just "The Boy".  Letting me have an entire chocolate cake to myself when we went on holiday together, just because you don't get that when you have siblings.  Trying to sneak a look at the daily paper when the Doctor asked her what day it was to test her mental health.  Relating the entire plot of Coronation Street without using any names - "It's him, he was married to her, but went with that other one from the newspaper.  And then she went off with him; him that I don't like".

So now, it's over to you.  Which Loved One will you be talking about today?  I'm looking forward to reading all about them.


Finally, I was contacted by the lovely Emma from the delightfully named DripDropPolkaDot on Etsy.  She's a new designer and has started with a range of little "Weeble" People.  She's offering followers of my blog a 20% discount if you use the code "SEREN20" between now and the 20th August.  Here are my two favourites from her designs: 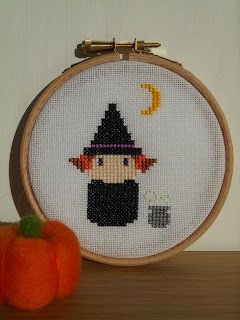 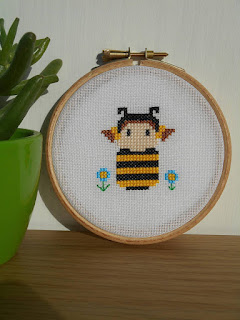 Posted by Jo who can't think of a clever nickname at 10:50

Oh Jo. What a special, love filled post this is. I enjoyed everything about it: your darling bare feet, your wonderful gifts of stitching and your beautiful stories.

What a lovely tribute to your Nana. She sounds like a very interesting lady. One of my biggest regrets is that I didn't stitch anything big for my grandma. She really enjoyed my stitching.

I just love this post. Thanks for sharing about your Nana and Grandad!

You always have great ideas for everyone to join in. I like the events that are post/link related as in recent times I have had sent exchanges gone missing...this way no problems. thank you for all that you do to promote friendship and blogging.

What a wonderful post! I'm so glad you have wonderful memories of your Nana. I used to have lunch with my Gran instead of school dinners too...great times!

Wonderful post! I added mine and hope there will be a few more.

What a fantastic and interesting post Jo. I would read the book if you wrote it.

I loved reading about your Nana, the Coronation Street story cracked me up!! She was a special person and make quite an impact on your life. All your stitches are beautiful..

What a delightful person your Nana must have been - thank you for introducing her and giving us a glimpse. (she shared a birthday with my mom - maybe they had cake together today...)

What a lovely lady your Nan was.It is heart warming to read of grandparents good relationships with their grandchildren.They each give the other so much.
You stitched precious pieces for your Nan and Grandad.

What a wonderful story. I'm so glad you were able to have your grand parents for quite a long time. You did some beautiful stitching for them.

It was so lovely to read about your grandmother and about those stories related to her. She must have been a remarkable woman and you truly had a wonderful relationship with her. I always love to hear when the bonds between grandparents and their grandchildren are so strong. It's very special.

Lovely to read about your Nana Jo

A lovely post Jo, My grandad was like that with the names, being the youngest, it took ages to get to me!

What a lovely post :o) The stitching you have inherited back is very reminiscent of the time and will always hold a special place in your heart and memories as will your grandparents :o)
Hugs x

Such a lovely post Jo. Thank you for sharing your memories about your Nana and granddad. I love the alphabet sampler you stitched for their 60th wedding anniversary.

Oh Jo, what a truly lovely post. What wonderful memories you have of your Nana, you are so blessed to have them.

A very special post Jo! It was very interesting to read about your Nana and Grandad, and all the lovely stitching you did for them.
Barbara x