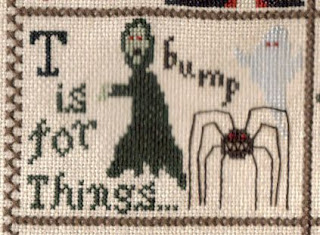 T is for Things that go bump in the night from A Dark Alphabet by A Note of Friendship.  The charts are no longer on the blog but do drop Julie and Becky an email if you are interested in stitching the design yourself.

T is for Tatting and Thimble as seen in this month's block from the Stitcher's Alphabet by Brooke's Books. 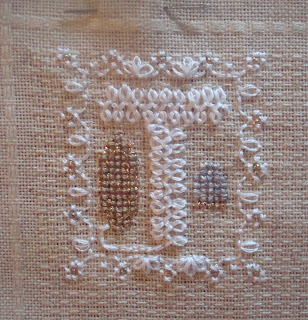 Do not speak to me about this block.  If the Queen Stitch featured as one of my favourites then the Lazy Daisy is NOT.  I loathe these things but there was no getting away from them for this block.

I think I would rather have learned to do actual tatting than stitch this letter.  Gracie does some beautiful work and sent a tatted heart for the Valentine's Hop this year: 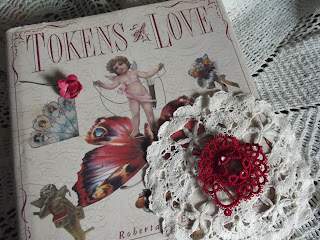 T is for Teacher's Samplers as a Thank You.  When the Large Boy was at Primary School I stitched a small sampler for each of his teachers and I continued this with the Small Boy.  Here's a collage of just some of them: 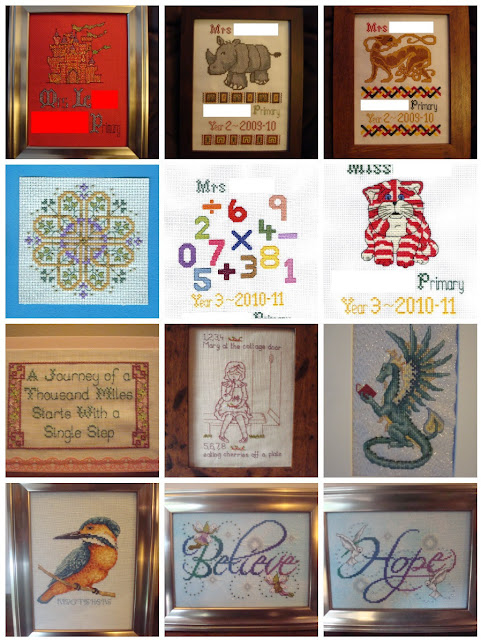 T is also for Travelling Pattern.  We used to see a lot of these, I've done three myself but not recently.  Here is the very first one I did where I stitched the previous stitchers' names down the sides: 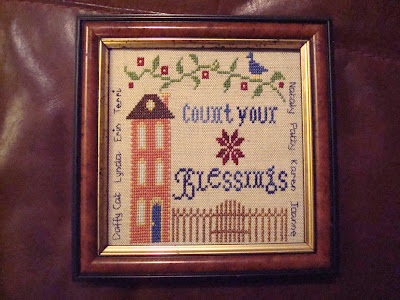 Triple T here - Thine is the Trick and the Treat by Prairie Moon: 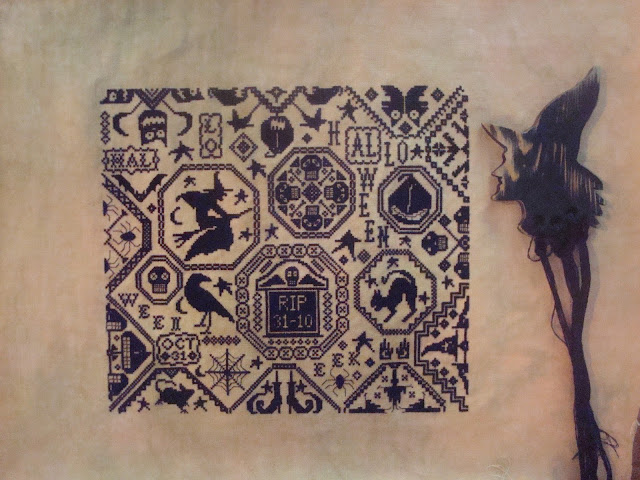 T is for one of my favourite designers - Teresa Wentzler.  Here's a collage of my TW finishes: 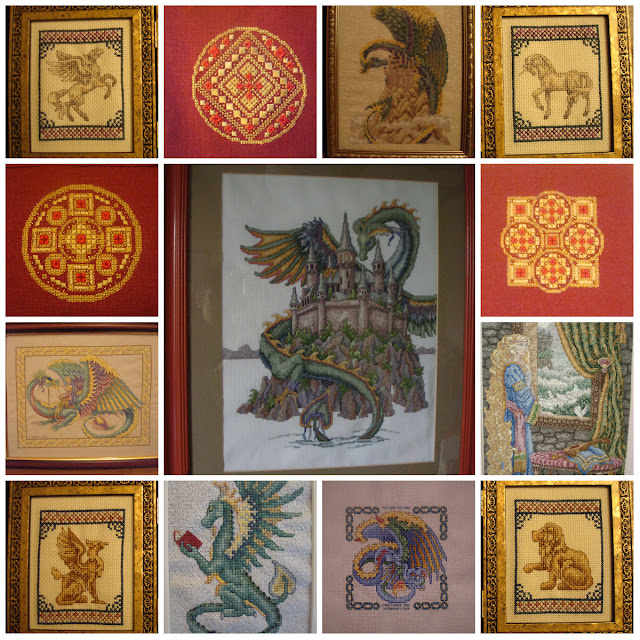 I have the remaining three Byzantine Ornaments on my "17 in '17" list this year along with Twelve Days of Christmas by Joan Elliott.

My blog roll has a lot of T blogs but I ignored all the ones beginning with "THE" or we'd be here for ever!

Tales of a Stitching Mouse

There's a whole lot more who haven't blogged for over a month but there's quite enough there to be going on with.

Finally, we have a new blog on the block - following the demise of Cross Stitch Collection magazine and their popular feature Blogger of the Month we now have - Blogger of the Week -

I have sent some questionnaires out to various bloggers and we will feature one interview per week.  Usually on a Friday because that's when I have the most time.  If you would like to be featured, please email me and I'll add you to my list.  Also, please promote on your blog because I would love to have new-to-me people to interview too.

Posted by Jo who can't think of a clever nickname at 12:37

What a varied selection of items in your 'T' blog. I enjoyed reading about them.

As always, your stitching amazes me! You are prolific! Thank you so much for sharing all of your wonderful work!

Lovely to look back on all those projects. Such a variety of designs.

Your Alphabet Club posts are always such fun! Ooooh, look at that - you did something similar to my thought about TW's fantasy sampler. Looks like you pulled out all four corner beasties and stitched and framed them individually...? Forever ago I did the unicorn on hardanger so it would fit in a keychain (yes, with all those fractional stitches, eep). My larger plan was to do the four of them as one piece. :) Love the TW reading dragon. And all your other TW pieces too (brave, industrious you!).

Real tatting? Argh! Tried it once (took a Spirit of Cross Stitch class...) and managed a single, lonesome picot - then everything else was just a tangled mess. People who can do it well amaze me!

Love all your "T" stitching. Adding the previous stitchers names to a traveling design is a great idea!

What a great collection of 'T' stitching :-)

Are you planning on doing any more TW pieces? They are lovely!

Love your T post...such fun! You sure have a lot of T stitching and it's all T-riffic!

Now, I bet you know which is my very favourite of your stitched pieces this month - Thine is the Trick or the Treat, of course! Great T post, my dear and congratulations on starting the Blogger of the month blog - I will post about it right now!

Terrific T post. Lovely collection of gifts for the teachers.

I always enjoy your letter posts. They are always full of great stitching.

Another great alphabet post Jo. I love all of your stitched pieces.

Terrific sTiTching. It takes a lot of heart to make gifts for teachers every year.
Your TW projects are beautiful.

Great T post Jo and congratulations on being a runner up in the 2017 Craft Awards.
I am off to read Blogger of the Week,I am looking forward to reading other bloggers contributions,great idea and thank you for setting it all up.

So many lovely stitches! I especially love Thine is the Trick and the Treat.

Whatever be the alphabet, you always have loads of lovely stitching projects to share :) I have tried tatting but could not go beyond few knots. Many people cannot differentiate between tatting and a lacy crochet piece.

What a "t"errfic post. You are very "t"alented. Love all the TWs. I did her freebie Stretch and promised myself to never do another one haha.

I love what you've stitched for teachers, so sweet. Of course the TW dragons I really love!
I have my finished Traveling Pattern, but have yet to frame it. I like how you added the names. I think by the time I got it, there were lots more.
Here's my T - Thankful for you!

Jo: What a great idea, love the Things design so sweet, love the idea of a stitch for teachers.
I am a fan of Teresa myself, but have not stitched one of her designs for ages.

T was a good letter for you, you've found loads.
Now you see I don't mind a lazy daisy stitch...

Great post! I love your traditions of the Teacher's Samplers, it must be nice to get such a personal gift after spennding so much time with the kids.

LOL...Well, the Lazy Daisies turned out great, the effect is really lovely. Sorry they were such a nightmare to stitch, though! I can't believe you've stitched all of those samplers for your sons' teachers! Great job :D

A gerat T post, Jo, and again your great word plays. The Theresa Wentzler collage is very special, what a wonderful fantasy designer she is. And great to see the teachers' samplers collage - a nice tradition I have never heard of over here.

Great post about the letter T! How nice that you made all os your children's teachers a stitched project. I'll be they treasure these gifts.

Terrific Tales of your stitching :). Just read all of the bloggers so far it looks great!