The two turtle doves arrived this morning and are cooing away in the pear tree as I write.  I'm so touched and grateful.
With undying love, as always, Emily

I have completed the second block of Joan Elliott's 12 Days of Christmas: 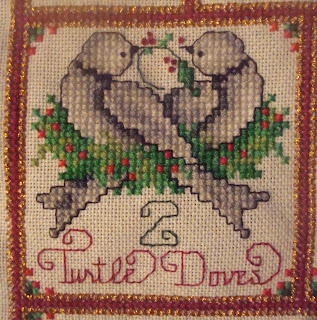 It didn't take long at all because so much of it had been done for the 12 Days SAL at Christmas.  Here is the whole piece so far: 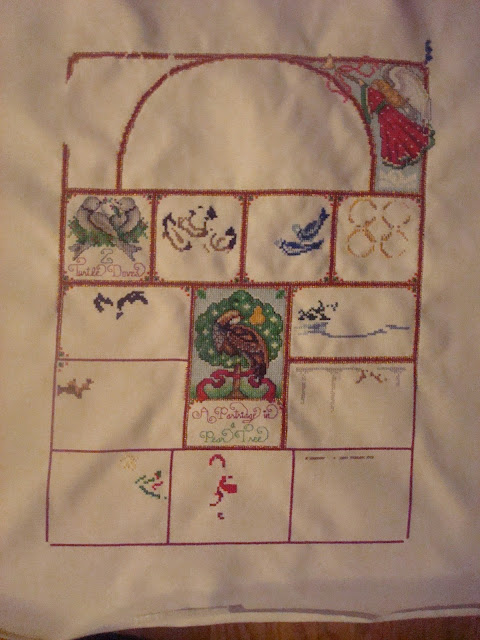 You can see where I am diligently stitching the gold metallic on either side of the red border.  I had used up one of the two skeins provided before I was even half-way done and it was obvious I would need more.  I emailed Design Works on Friday 3rd February with a photo of my progress and explaining the need for another skein of metallic thread.  They replied within the hour promising to send one.  Which arrived on Tuesday 7th February.  At first I assumed they had asked a UK stockist to send it, but no, the skein came all the way from the US in just four days, two of which were a weekend!   That's good service for you.

I worked on Sunday so I decided the FFO for the weekend should be a simple one.  I found a great frame for £1 in a charity shop which was perfect for Fox Forest by The Workbasket: 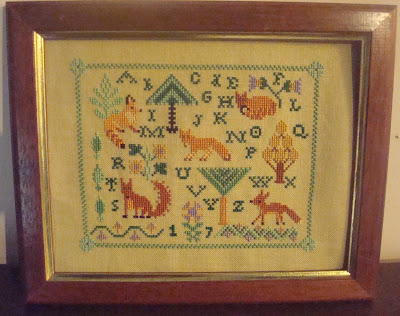 I even managed to get an accurate photo of the fabric colour too.  It's 32 count Light Khaki linen.

I'm doing so well with the Ten-a-Day Challenge, stitching and posting photos every day.  Here is the current progress on Day 39: 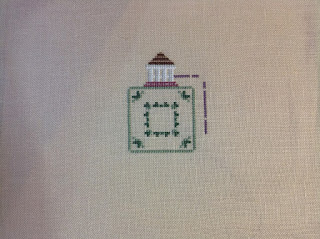 That violet border is going to take some time!

Finally, it's nearly time for the Secret Stitching Sweetheart Blog Hop.  If you signed up to take part, please could you email me your photo by Friday 10th February.  If you haven't signed up then you have until Friday to let me know you'd like to be involved.

Posted by Jo who can't think of a clever nickname at 19:54

Email ThisBlogThis!Share to TwitterShare to FacebookShare to Pinterest
Labels: 12 Days of Christmas, Joan Elliott, Just Nan, Spring in the Square

You did a great job at framing Fox Forest.

The turtle doves have such sweet faces. Your foxes look marvelous all framed!

You have been busy! Good girl!

Congrats on the block completion. Always happy to hear about good customer service.

Lovely stitching!! The turtle doves are looking so much in love.

The frame was a great find, it's perfect for the fox sampler.
Loving the little snips from the "correspondance" and looking forward to when she starts to get shirty

The turtle doves are lovely as is the framed Fox Forest. It's nice to see the progress on your Ten-a-day.

Great stitching progress on your projects.
What a great bargain on your frame. It finishes off the sampler beautifully.

Your Turtle Doves looks beautiful indeed. So glad they were able to get you the threads you needed so fast. Now it won't have to sit idle. Love your ten-a-day piece. Looks so beautiful. I'm doing the finishing today on my Valentine piece and I will email you later. Thanks for hosting again.

Love those Turtle Doves. And your ten a day. You are so very good at staying on course. I guess I am easily distracted, but it works for me, most of the time.

The Twelve Days is looking pretty and I like the frame you have used for the Foxes.

What a busy lady you are , such beautiful stitching , love The Twelve Days what a great stich.

Fantastic FFO. I made a trip to the local thrift stores in search of frames yesterday. I adore the turtle doves. Your work is just beautiful.

Two turtle doves is adorable....that whole piece will be fantastic. Perfect frame for you foxes stitching too, and what a bargain it was!

The 12 Days is a beautiful design! You are making great progress!

Love those turtle doves! Love your FFO :o)
Will send my photo tonight when I get home :o)

The twelve days is very pretty.

That was incredible service! 12 Days is beautiful! I am enjoying watching it develop so very much! I really do not know how you are keeping that 10 A Day Challenge. I would not be able to stop, but it is so fun watching the progress from your daily pictures.

12 Days looks lovely! Congrats on finishing the Turtle Doves, and on framing Fox Forest. Great progress with your 10-a-Day too! :D

That frame was a bargain- it looks great! The turtle doves are so pretty.

I love the Turtle Doves, they look great!
Your Fox Forest looks wonderful framed, perfect frame for that price!

Those doves are really sweet, and good job on securing more of that thread before you ran out! I wouldn't have thought they would get it to you that quickly, but they probably know how stitchers can be a patienceless bunch!

They are so sweet, the two little doves. A great Day 2. As you already know I admire you for all that stitching with metallic threads. I don't know what I would do, maybe replace the metallic by a normal thread? Lol.
You found a wonderful frame for the Fox Forest, and it definitely was a great deal.

Yay for a mini finish :). It's looking great so far!