The Imaginative and Intriguing Alphabet Insiders 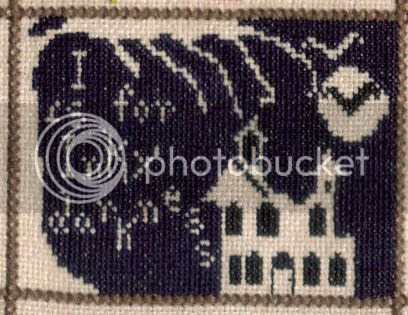 I is for Inky Darkness from A Dark Alphabet designed by Julie and Becky's Note of Friendship blog.

I is for Intarsia as shown in the Brooke's Book's Stitcher's Alphabet piece I am stitching for the Alphabet Club SAL: 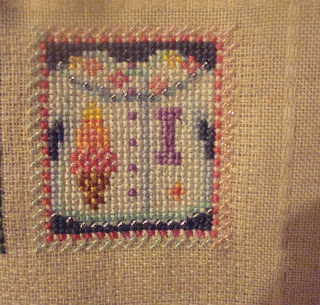 Intarsia is a method of knitting with a number of colours, in which a separate length or ball of yarn is used for each area of colour (as opposed to different yarns being carried at the back of the work).  Here is an entry on Wikipedia about it  - Intarsia

I is also for Incomplete which is what my H block was last month, so here it is, fully completed: 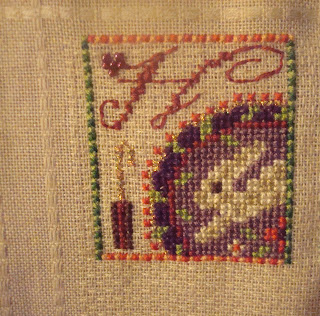 I added the metallic for the hook and a little beaded heart.

I couldn't really think of an I theme for my stitching, icecream?  icicles?  igloos?  There is IHSW - International Hermit & Stitch Weekend for which I have been stitching Elizabeth Shephard, so here she is: 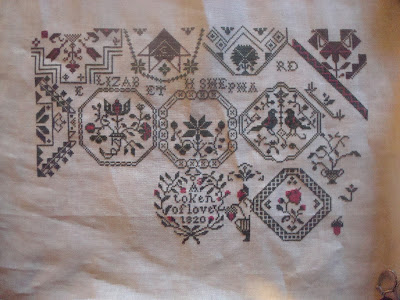 This is a very old one from the archives - Imperial Dragon by Serendipity Designs: 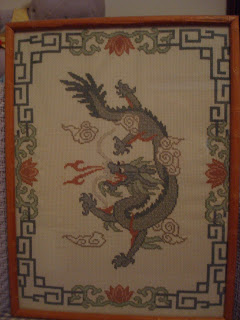 (I did not get my blog title from them, I had not even realised that I had stitched something by them until I started cataloguing my old pieces!)
No WIPS or UFOs for I though!  I did fare a little better when I came to designers.  Phew! 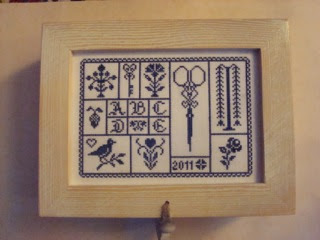 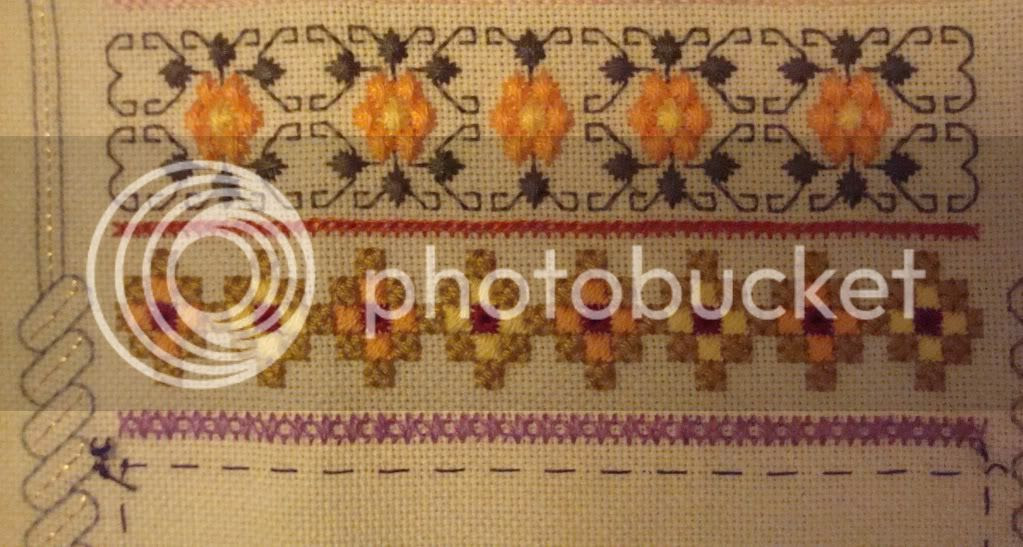 Margaret by Indigo Rose
(bands stitched for a Round Robin) 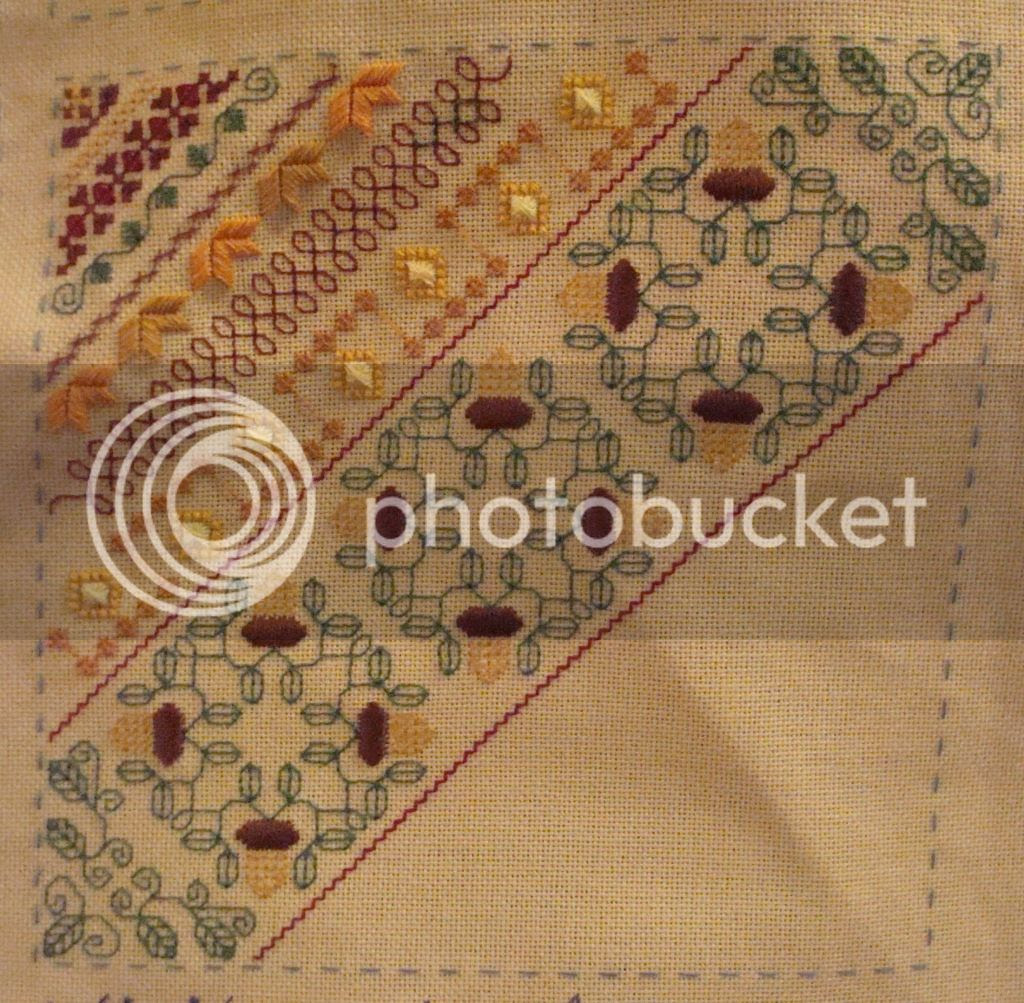 The final designer I am so surprised that I do not have a started or finished project because I love the designs - Ink Circles.  I think it is because I have bought two charts for myself rather than being Gifted them.  So they got put to one side in favour of the Gifted Gorgeousness projects.  These are the two I own: 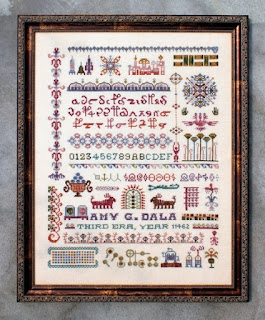 There is a fascinating story behind this sampler which Tracy tells on her blog here.  There are also various blog posts where she tells us more about how she set about deciphering this valuable sampler. 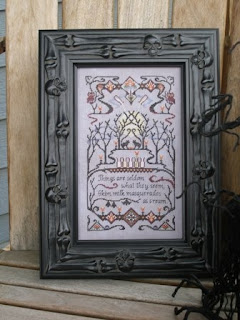 and the slightly more normal

It's Geek to Me

I Love to Stitch

Finally I will include my progress on Just Nan's Spring Typography, this is three days worth of stitching: 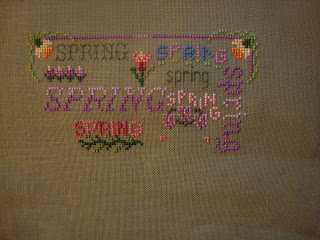 stitched on 32 count Dark Reed linen.
A nicer green than the picture shows!

Wonderful "I" post, as usual you had me ogling at every piece. Those specialty stitches are lovely. And your IHSW WIP is looking great:)

Lovely pieces all. It is amazing how many SALs and blog hops participate in. I'd never keep them all straight.

Hey Jo, it's lovely to look back at some of your projects. I love the istitch sampler and the indigo rose ones too. I'm off to look into the little alien sampler. You've made a great start on Spring too.

Awesome post as always Jo. I love the colors in Spring Typography.

I'm so glad my blog title helped you out a little!

Lots of wonderful "I" things! The Spring design you are working on is very pretty. You are making great progress.

Spring is really springing! Love how it's coming along, unlike our early spring weather. We've had 50 mph winds, power outages, and temps heading down into the 20s tonight. Oh, well! In Illinois (USA) we say if you don't like the weather, just wait until tomorrow. Hope your skies are sunny.

Weirdness! Me?! Where on earth did you get that from? It must be the exclamation points! :B

I is clearly for ice cream stains on a shirt. Doesn't everyone have an ibex listening to his iPod while living in Iceland pattern? Iambic tetrameter sampler? No? But that alien school girl sampler is holycrapamazing.

Wonderful I post, as always :) Love your iStitch mystery SAL piece and the colors in Margaret are beautiful!

Another great post. I just love the variety of things you stitch.

I am finding it difficult to trust this post, it's I's are too close together.

It was bit more difficult to find "I" things than finding words and things for other letters. Well, at least for me. But the post you compiled has some great examples for "I". I just love "incomplete", lol.

This inky sky is perfect and the two Indigo rose stitchings really nice. I must have a look to this intarsia knitting ? (as well as on Alien girl!) Inevitably TAC post is a new door to open on "inconnu" (unknown). hugs

Interesting post. I must look up Intarsia. I like Ink circle designs,may try my hands on them someday.

Great post I love the inky darkness piece but can't imagine stitching it :)

Some lovely i-things! And a couple of new-to-me blogs. I loved the story behind the Alien schoolgirl sampler. Very mysterious!

A lovely bunch of I things Jo. So nice to see some of your much older pieces being shown again. :)

Thanks for sharing the interesting 'I's !! Your projects are lovely. I alien sampler story was interesting too.

I have just read "No WIPS or UFOs for I though!" me thinks the blog writer tells fibs, we all know you have a few WIP's and UFO's .... lol
Spring does look gorgeous, such delightful colours in it

Jo, your post is a joy to read, as always, thank you so much. I have learnt two new things today - Intarsia knitting and that Aliens do truly exist - lol!

I always enjoy your alphabet posts. I thought that "I" was going to be a challenging letter, but not for you. The Little Alien Schoolgirl sampler is really unique--love it!

Great post for I as well! Now I can really see that H is for Hoop, not hoop (or maybe both?), and I learned something about Intarsia as well. I love Ink Circles, they have some wonderful designs, and then there is Imaginating of course...I recently got some of the Indigo Rose patterns on ebay, as they are sadly discontinued, and I'd love to get the season series complete (I only have spring and autumn now, but winter might be my favourite). On the subject of sesasons, great start on the spring typography, love the colours!

Very fun "I" post and lots of lovely stitching. Nice start on Spring and I must add Masquerade to my wish list as well.

Oh my goodness, thank you for mentioning "incomplete"!! Do you know that I don't have a single WIP worth a design name that starts with "I"? That's just...inconceivable. ;)

Also I am marking down on the calendar where I was called "slightly normal". That's way better than I usually get!! =D

So many little pretties in one place! I love your version of Spring, it's looking very springy. xo Alicia