First Finish of the Year!

And also the first post since November which isn't for a SAL or other event!

Actually this was for a SAL but not a "regular posting on your blog" type of SAL.  This is Plum Street Samplers 12 Days of Christmas: 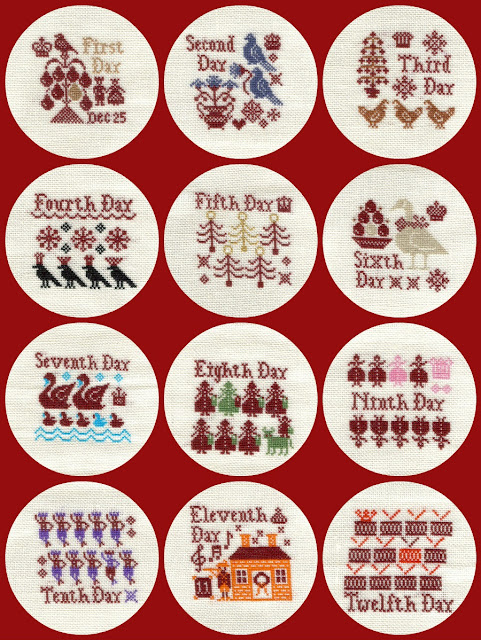 I made a collage!

I first saw these designs in Just Cross Stitch magazine which published First Day and Second Day in 2011 and 2012.  I liked them but the series never continued.  Until now!  Following numerous requests for the series Paulette decided to make them the Mystery SAL for 2015.

I stitched them over one on some 25 count creamish linen I had.  The plan is to scrapbook them across two matching pages I have already bought.  I quite like them as circles now I've done the collage so maybe I'll figure out an easy way to make them into circles!

Christine and I had a very interesting discussion about the song because we both learned the version where there were 9 Pipers, 10 Drummers, 11 Ladies and 12 Lords rather than this version.  Some internet research revealed that we were taught the original version from at least 1780 (and no, we are not that old!).  They remained that way until 1906 when the modern version was sent to music by Frederic Austen.

If you look at this Wiki entry you will see some rather strange versions have been used - Wiki - 12 Days of Christmas.  I'm not sure I want to stitch Bears a Baiting or Asses Racing!

The origin of the rhyme seems to be a "forfeit" song where you had to remember all the verses or pay a forfeit.  There is an old wives tale that it was invented as a catchism for persecuted practioners of the Christian faith with the various items representing various Christian themes.  But as the symbols use the 1906 version this seems rather unlikely!

There is however a song called A New Dial which does teach numbered religious themes which is reproduced on this website - Snopes - 12 Days of Christmas so it would seem that the two have become confused over the years.

As is traditional for New Year's Day I had a new start and a partial finish on the same day.  My project for the Hallowe'en Ornie SAL Blog will be Just Nan's Counting Bats.  As luck would have it the bands fit perfectly with our themes this year.  Well, considering I chose the themes, it's not really much of a surprise!

Here is the first band made into a collage with some of the bats cropped and rotated to look different: 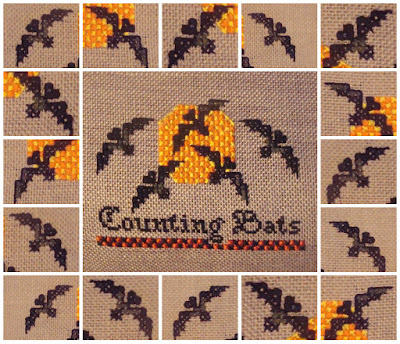 I've also been working away on a little Christmas Cottage called Poinsettia Place by CCN: 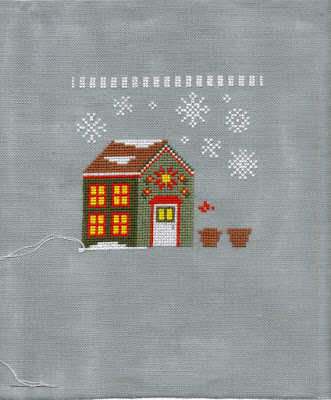 I started this last year on Day 3 of the DUCJC and didn't pick it up again until December!  There's quite a bit of white snow, red in the top border, a pine branch bottom border and the two flower pots to go.  I do like the way the white pops against the blue fabric.

Finally, I've been sent something unusual to review.  It's a product in daily use but not one you might think of when it comes to artwork.  I shall let you ponder and wonder until I do my next post!

Posted by Jo who can't think of a clever nickname at 19:38

Oh, I am working on Paulette's " Twelve Days of Christmas" right now! Love your choice of colors and the changes.

I really like how you did the colors in 12 Days! The Christmas Cottage is pretty too; and I love Halloween so I look forward to seeing how Counting Bats develops!

Great to hear from you and congrats on finishing all 12 Days! Interesting info too and nice stitching on your other projects.

So much goodness and all in one posting! Love the 12 Days history, it's fabulous to learn new things about old things :D I'm pondering what you are reviewing and I'll bet it is something so OBVIOUS we all miss it haha!

12 Days look terrific as circles so it will be nice if you can scrapbook them that way. Loving the little cottage and will be interested in watching the bats each month.

Twelve Days is fantastic the way you stitched them up.
Ha! The first thing I thought of that you use daily, but wouldn't think of was toilet paper. I'm not sure what that was about?

An amazing finish and great background behind the origins of the song. Love your other two pieces of stitching too. No idea what you could be reviewing so will watch with interest.

I was taught the same version as you also - I still remember a big white book I had as a child full of rhymes. Your stitching is looking great, I love the fabric you are stitching Poinsettia Place on!

Beautiful finishes and thanks for the interesting information about the song! I too learned the 1780 version.

Love your version of the 12 days!
Great update! You are starting the year off right!

I love your 12days, such a lovely SAL. Your CCN looks great on the dark fabric, good to show off the snow, there is a lot of it.

I love your version of the 12 Days of Christmas. I have printed out all of the charts for a future project. Your other projects are doing well also. I could stitch Christmas all year long.

Lots of beautiful stitching going on. It all looks wonderful.

Congrats on the awesome finishes Jo. Poinsettia Place looks great. Love reading about the 12 Days of Christmas. That last paragraph was not very nice. lol (I hate waiting.

All of the stitching is lovely. The bats are so cute and the cottage is great on that linen!

Congrats on first finish of 2016! The changes you made to 12 days of Christmas are lovely.
Great progress on Halloween and cottage pieces.
Have you been asked to review a hand made soap? lol

Great finish, love your colour choices, what a good idea!

Your 12 Days looks fabulous Jo. You could always iron on Vilene to make them stiffer before you cut them into circles and they would not fray then either.
We sang the 12 Days at the Book Borrowers Christmas party and each number at the beginning we passed a gift round the table that many times (bit like the left/right game)it was fun and we all had a sing song lol.

I need to learn how to do the collage on my blog, it does look good, the bat one is fab!

Your 12 days look really lovely framed together and as circles. The different colours each day make them really appealing to the eye.
I've seen quite a few people do the CNN cottages. Methinks I might have to get them to stitch in 2017! :)

Oh oh oh, so much eye candy here. The Twelve days are so gorgeous and I truly love your color ways in each of them. This scrapbook thing that you are doing tempts me more and more. I just have to find a book that is larger and wider than the usual books. How great your Twelve Days look in these round apertures. And Poinsettia Place will soon be finished.

Love the way you've done the 12 days. The red plus one color is really effective. Each inside a circle is such a nice way to display them too.

The Twelve Days look so nice, congrats on your finish!

What a beautiful finish of the 12 days! That counting bats is cute! Poinsettia place looks great too!

I love what you've done with 12 Days. Very clever!

Those pesky SALs do eat into other stitching time don't they?: Love the 12 days all finished up to9gether

Lovely stitching as always and so interesting to read about the song. I did a set of 12 ornaments for my tree Based on that song. And then gave them to be sold at our Embroiderers Guild!

Great finish! I love your version with all the different colours. Also, very interesting facts about the different versions of the song! Can you believe that I didn't know about it at all before I got into stitching? It's just not very popular or common around here...

Beautiful finish! I love your version of the 12 Days. And Poinsettia Place is looking gorgeous!

Beautiful work on your 12 days! Never knew the order of the days had been changed.
Lovely stitching. Love the bats!
Great update and belated happy new years

I agree--the 12 Days does look good as circles. And someday when I get around to stitching them (when I win the Powerball and retire) I will try to remember this. Both of your other starts are quite lovely as well. Like the colors in the bats.

CCN designs are so cute! I wish I had more time to stitch a lot of them =)
Looking very very pretty :D
hugs&smiles

Congratulations on finishing your 12 Days and thank you for the little bit of history After you mentioned it, I had to go back and sing the song to see how I remembered it - the new version (I think). Love the bat collage. The CCN house is very cute, looking forward to seeing your progress on it.

Yes, keep the circles, they look nice that way. Why don't they have dragons drumming or mermaids milking?!

Congrats on the completion of 12 Days, they look great.
Love the CCN Cottage series and hope to stitch a few.
Cute bat design!

Congrats on the pretty finish. Didn't know this song had so many variations, lol. I thought it was just the calling/collie birds. Thanks for the nice trivia:)

Lots of lovely stitching Jo! Congrats on your finish:) I always love your Halloween stitching!

Great stitching, Jo, you have certainly been very busy. Your 12 Days looks great - I must pick mine up again!

Those 12 days of Christmas are lovely, could be perfect to learn to count for my grandson. Bravo§

I did not remember your stitching finish, of course not, since it was that period I moved to a new home! OH my! Your version of 12 Days of Christmas is awesome, Jo! It looks is stitched 1 over 1!