First Week of the Summer Holidays

and of course, we have had steady and heavy rain since yesterday lunchtime!

The Large Boy is at High School (age 11+ here) and they broke up at 1pm last Friday while the Small Boy lucked out and didn't finish until Wednesday afternoon.  So we took advantage of the time together and went on a Dragon Hunt!  Norwich is our nearest city and one I know well as I worked there for 17 years pre-children.  They have had a couple of these hunts before (Elephants and Gorillas) and this year it was Dragons.  More information can be found here but essentially there are 84 large dragon sculptures dotted around the city.  Each one is decorated by a different person to a different theme.  You visit each one and collect a letter or symbol which then spells out a message.  Sounds rather like my Hallowe'en and Easter Blog Hops!

They are also selling postcards and here is a collection of our favourites: 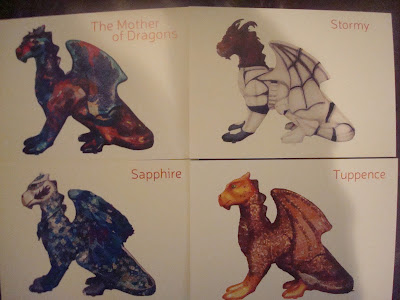 The bottom left was made by the staff at John Lewis (department store) and is lots of small fabric pieces embellished with buttons.  I'm going to go back and take some decent photos of it later in the holiday.  The bottom right is entirely covered in 2p coins, plus a few 5p and pennies.

It was a good thing that the Small Boy finished later in the week because I was still beading the final teacher gift on Tuesday evening!  Hope was beset with a plague of frogs.  At times it felt like Pandora's Box where I had to fight through all the winged nasties until I found Hope at the bottom!  Here it is all framed to match Believe: 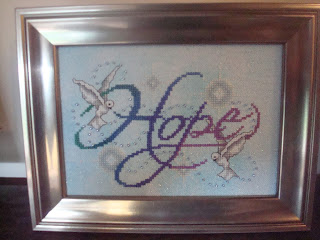 Hope by Joan Elliot - from the Bewitching book 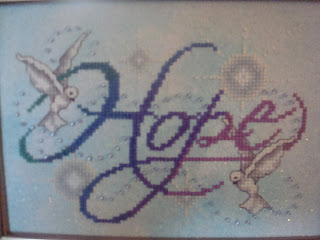 The Small Boy's school is a little unusual in that the children don't change teacher every year, quite often they do two years with the same teacher.  So I didn't realise last year that he would be moving up a class until it was too late to stitch anything!  So this year I was more prepared.  Believe is for his current teacher and Hope is for the teacher he had in Nursery and Reception.  I didn't see them because Hubby does the school run but he said both teachers were incredibly touched by their gifts.

I did see the teachers at his other school though, the Kingfisher Class.  They had a little leaving ceremony for him which was lovely.  All the children in the class had made a huge card with drawings of each of them and they let him choose his favourite song for them all to sing.  Then I gave them the Kingfisher picture.  One child was nominated to open it and they all craned over - "It's a picture of you", "it's a bird", "it's a kingfisher"  "IT'S US, WE'RE KINGFISHERS".  You can imagine how excited this made a bunch of five year olds!

The Headmaster had been watching all this and then the Chair of the PTA appeared with gifts for me!  A framed photo of the class (including the Small Boy) and a lovely engraved pen to thank me for all my hard work over the last 9 years.  That was unexpected!  We don't usually make a lot of fuss when people leave because it happens regularly as children grow up so it was nice to be appreciated.  I think she's keeping me sweet in case she needs to pick my brain in future LOL

So, end of an era there.

With all the busyness, I didn't stitch much of Pretty Little London, just some blue in the London Eye: 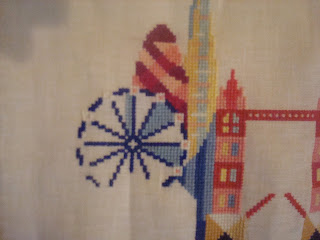 The last two days have been dedicated to Hallowe'en Ornie SAL blog's July theme which was Haunted Houses: 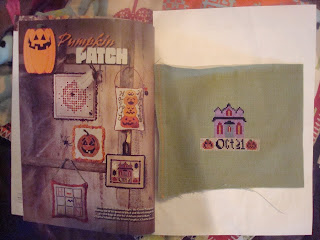 This is a Knotted Tree design from JCS Ornie Special 2013

I'll show a close-up and more details when I finish it, which won't be long now.

Many of you know that I have been very involved with the Scarlet Letter Year blog set up to celebrate Nicola's special birthday a couple of year ago.  Later this Summer a group of the stitchers are meeting up at the Cotswold Manor House which houses the Fellers' collection of samplers.  There is still room for a couple more people.  The trip is on Wednesday 26th August and costs £30 including a lovely buffet lunch.  If you are interested then send me and email and I'll pass your details on to Nicola.  More information about the collection can be found on Needleprint's blog.

Finally, the Summer Postcard Blog Hop.  Four cards have been sent and posted online so far with a fifth today.  You can see them all here:

What a nice read! Dragon hunt, how interesting! Surely the boys had a blast:). Always great to know something new about other places/culture through blog, and a Sampler trip in the offing, pls.share pics too:) That Kingfisher story is adorable. Love your Hope finish and great progress on the WIPs as well.

A dragon hunt is awesome. So glad the wonderful teacher's gifts were well received. And I am glad YOU are appreciated.

Aw I would like a dragon hunt as well! I think here we might have to improvise and see them in clouds or tree shapes though haha.

The kingfisher story is so cute! I'm sure they were just amazed to see themselves in stitched form. :D

A Dragon Hunt sounds like fun, how creative they were with the mixed art ideas. In our large town down the road (Buffalo Mn.) Businesses have bought buffalos the size of a real buffalo that are decorated.
Love you Hope finish, it is lovely.

Its good to know that the teacher's liked your gifts and gave you a gift in return.

Good luck on the dragon hunt, and I'll look forward to your photos. That's so nice to be appreciated for all your hard work and so great that your recipients loved their gifts.

Hope is lovely! How wonderful to read about the excitement of the Kingfishers!! A Dragon hunt sounds like something my boys would love ")

Sounds like the gifts went over well with everyone. The dragon hunt sounds like a lot of fun.

Just read your message about the postcard, but I'm at work today. Will get it into my blog at some point this weekend.

How fantastic has your last few weeks been? I love the Dragon quest...now I need to read more about that :D

It sounds like you have had a busy but fun time. The dragon hunt sounds like a lot of fun especially to do with your son. I'm glad the teachers appreciated those lovely gifts.

What a fun scavenger hunt! A lovely idea for people to do. Pretty pictures; my daughter loves dragons at the moment so I look forward to seeing the future ones. Congrats on the gorgeous finish; I've been eyeing that book lately. So happy they loved their gifts, and it was sweet they honored your hard work. The haunted house is looking great, too :-)

Congrats on the gorgeous finish Jo. London and the ornie look great. If I can't see the right side of London it looks like we have about the same amount done.

'Hope' looks amazing!! Good progress on both the pieces. The dragon hunt sounds interesting, have fun !! I enjoyed reading your story about the Kingfishers :)

Wow, so much stuff going on in you life - and I thought I was busy! That dragon hunt sounds like fun, I'm glad you had that adventure with your older son :) Yay for finishing Hope, and double-yay for you and your gifts being appreciated that much, you certainly earned it ^_^
Lovely new stitching too!

The dragon hunt sounds wonderful. Hope came out really well , no wonder the teachers loved their gifts, and how nice for them to give you something too. It must be wonderful to feel you are appreciated

So wonderful to catch up on news of your boys and I am sure that everyone appreciated the lovely stitching that you did for them. That dragon hunt sounds like so much fun, I am wondering - has the Large boy read the Stoneheart trilogy by Charlie Fletcher? If not, I think that he would love it.

A dragon hunt?! Another reason to come visit!

I'm sure they loved their gifts, they turned out wonderful. How nice to be appreciated, good for you!

The Dragon Hunt sounds awesome! Glad your gifts were well received, loved the kid's reaction to your Kingfisher and how nice for you to be appreciated by the school too :).

What a wonderful surprise for you, its always nice to know your efforts have been appreciated. I bet they'll miss you.
A super time you must have had together,

The Dragon Hunts sound so much fun!! Loved to see the one from John Lewis :)

Oooh, that Dragon Hunt sounds like so much fun! Beautiful stitching :D

What a fantastic idea - a Dragon Hunt! Hope you get to take some more pics...
Hugs xx

I love the idea of a dragon hunt! That sounds brilliant. Hope is absolutely beautiful. How lovely that you got goodies too. xox

A wonderful idea, this dragon hunt.. My boys would have been pleased as well when they were still kids.
I love the gifts that you made for the teachers.