WIPocalypse is hosted by Measi's Musings

First Finish was Joan Elliott's February Cherub from the 2013 Diary: 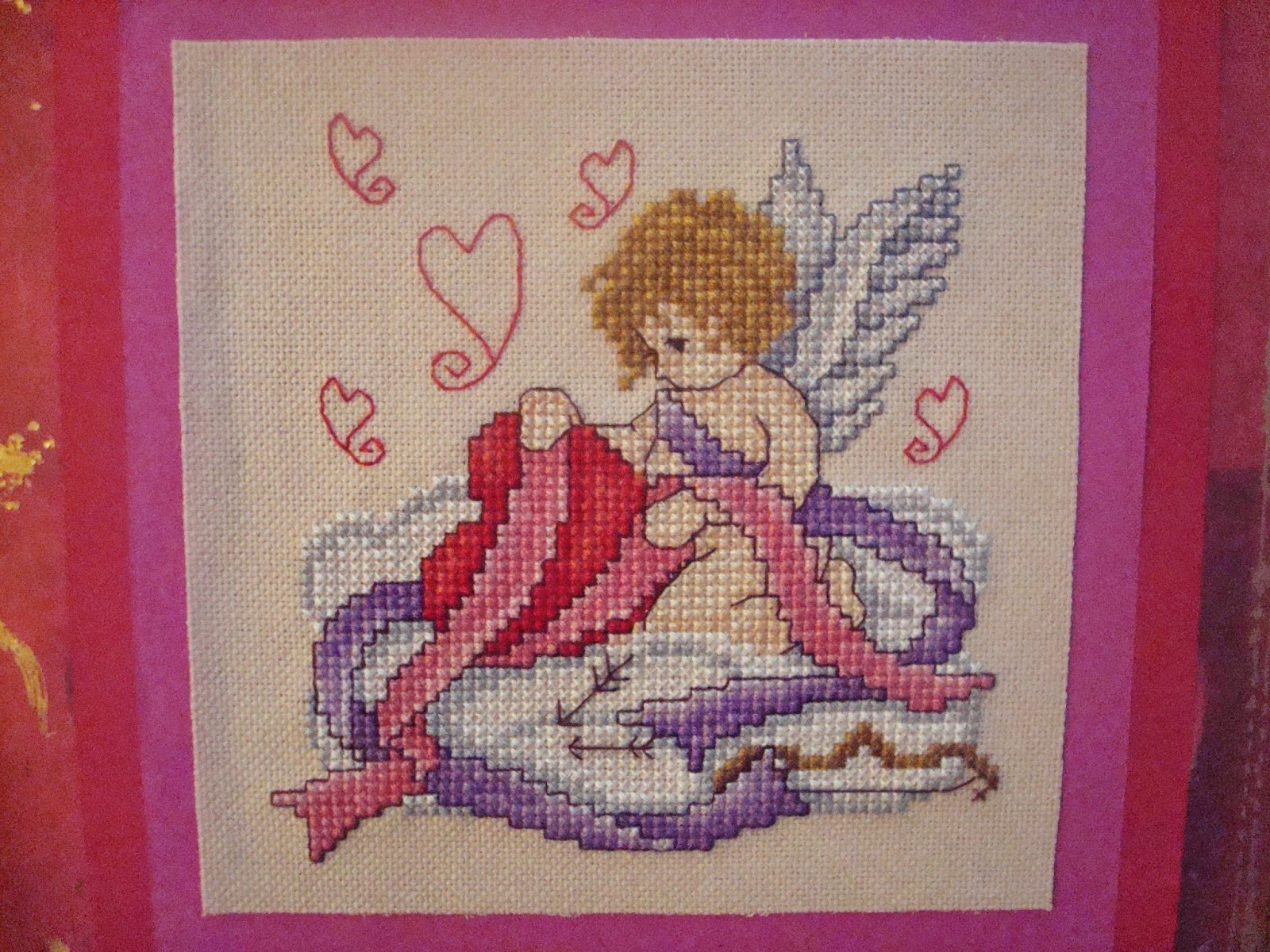 ﻿
The second was Prairie Moon's Thine is the Trick and the Treat: 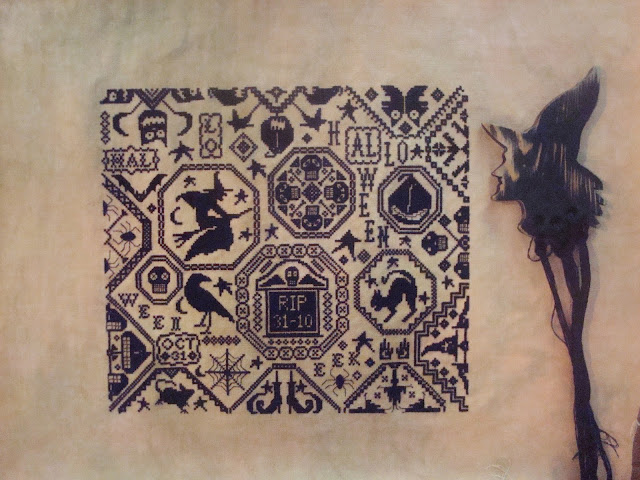 And the third was Just Nan's Winter Typography: 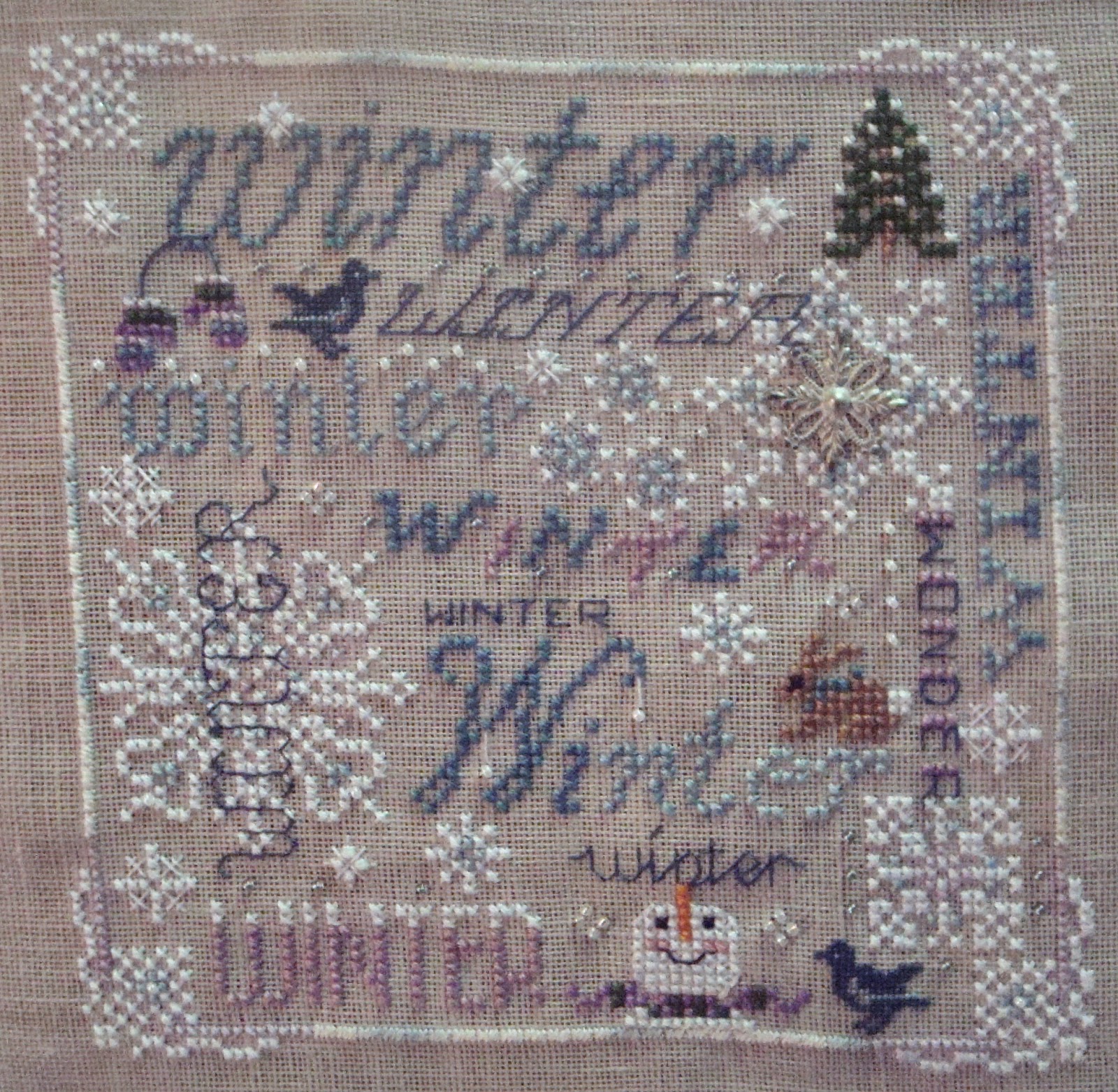 I also completed another letter for Hallowe'en Cubes by Primitive Hare: 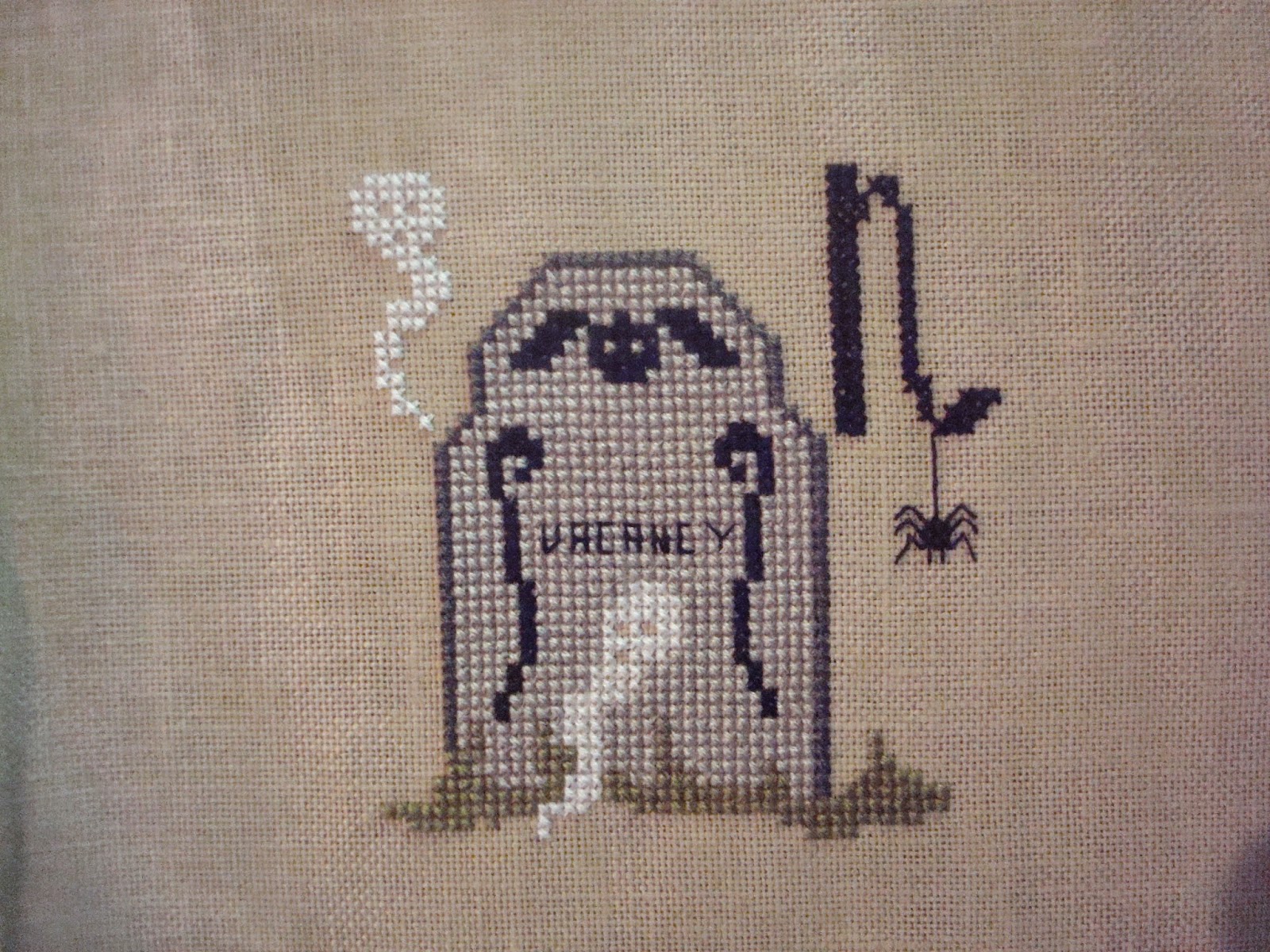 Once I had completed these pieces I decided to continue with another of the 15.  Just Nan's Haunted Pumpkins Tree.  Thanks to a nice long weekend I have almost finished it!

This is what it looked like at the start of the weekend: 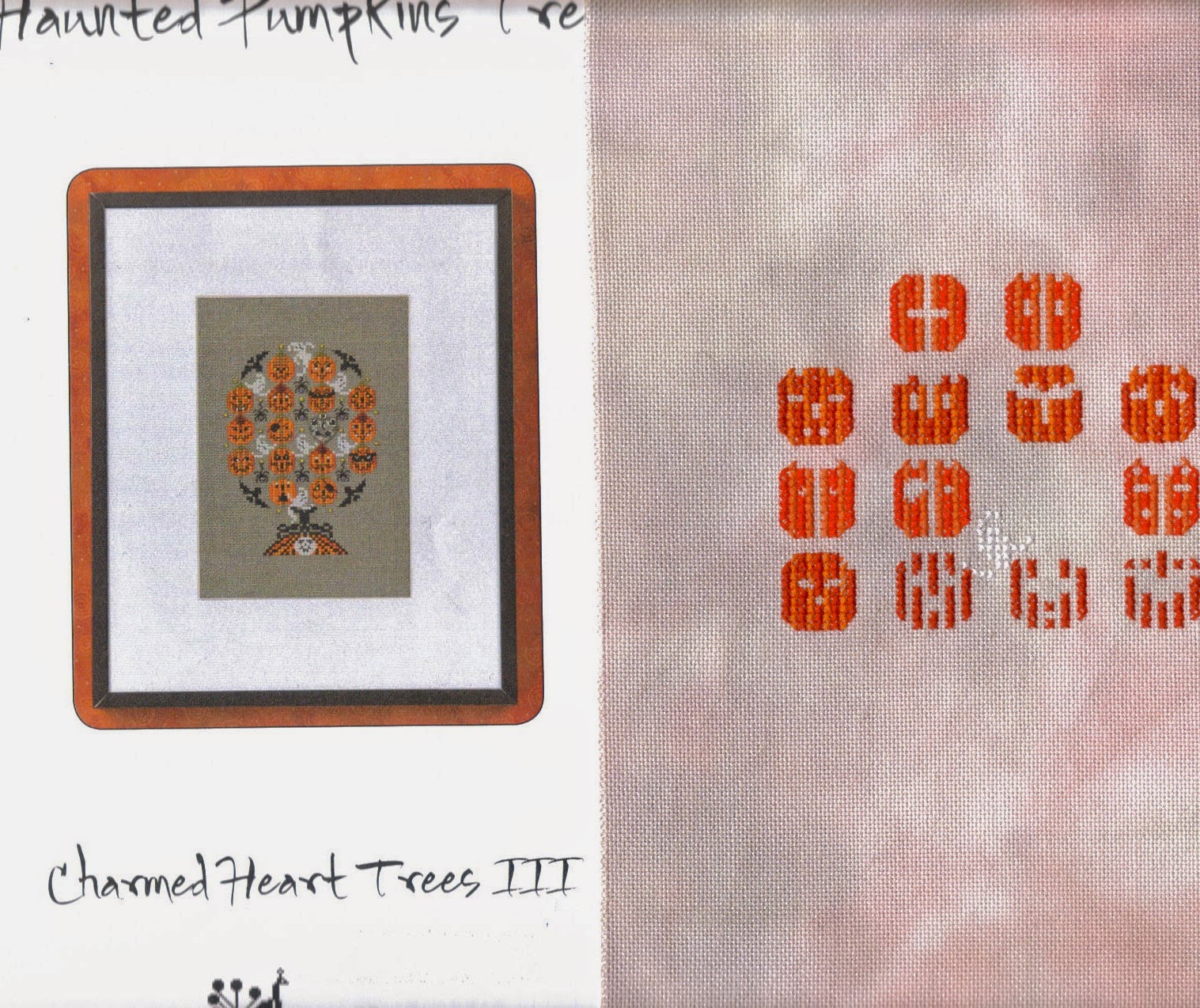 This was by the end of Saturday: 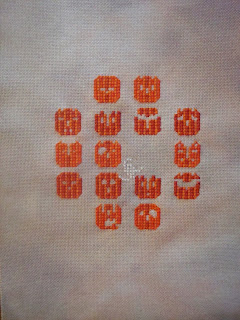 And this was by the end of Sunday: 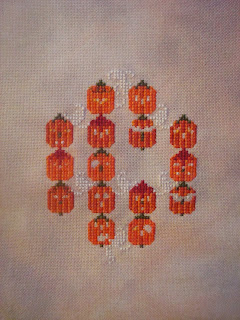 I have now completed nearly all the black stitching thanks to a Star Wars Movie Marathon on Sky TV for Star Wars Day - May the Fourth be with you.  The fabric is a 28count evenweave from Crafty Kitten called Chocolate Orange.  Beautiful to look at and stitch on but does not actually smell of chocolate orange.  Shame really but at least it stops people licking it.

Measi usually sets us a topic to discuss and asked for suggestions this month.  Unfortunately she hasn't chosen one yet so I'm going with one of mine:

May - what do you like to listen to while you are stitching?

I like to have something on in the background when I'm stitching.  Usually I don't get the choice, its whatever channel is on TV for the boys.  Usually Cartoon Network.  Last Summer the TV was tuned to CN so much that the logo was burned into the plasma screen in the corner.  Seriously!  Good thing it's rented and not our's.  When they are at school I listen to Planet Rock on the radio, I like to let someone else choose the music and I enjoy the chat too.  Sometimes I comment via their FB page and usually get my comment read out because I have the same name as a famous guitarist, although his Jo has an e obviously.

Sometimes Hubby and I will watch a film together and I prefer one with more dialogue because you can follow it without watching!  It is a true saying that stitchers recognise actors by their voices and not their faces.

Finally, the April A-Z challenges are all done for another year.  I did really well this year.  What do you mean, you missed it?  My challenge wasn't to POST every day, it was to read other people's posts every day!!  I think I managed most of my regular followers, even if I didn't always comment.  One person's blog that I did comment on every day was Evalina's of This and That.  She always does a great A-Z and this year her theme was her heroes.  From Literature to Politics via History and Myth she made some great choices.  My personal favourite was Boudica because she's a local lass.  The Iceni lands were in East Anglia where I live now.
﻿
﻿
Posted by Jo who can't think of a clever nickname at 19:11

Great job on all of your finishes and I hope to have my Trick and Treat finished before Halloween this year. I sometimes listen to audio books while stitching and I never have to look up.

I usually listen to whatever DH has on the TV. If it's Sunday, it's most likely the NASCAR race. It's funny how many commercials are using classic rock songs in them. Kinda makes me feel old. LOL!

Great job on all your beautiful pieces.

All the pieces look great. But I really liked that Cherub and the Winter piece. Great job on them.

Lots of lovely stitching. I agree with stitchers recognize actors by their voices!
Have a good week Jo.

You did a lot of lovely finishes, congrats! I'd rather listen to music than have the tv on while stitching:)

Wonderful finishes. You have inspired me to stitch Thine is the Trick or Treat. I am going to finish up the sampler I'm working on first. Then I am seriously thinking of doing just Halloween things till Oct.

I always enjoy seeing your stitchy progress. You have a lot of finishes to celebrate this month.

Gosh, a lot of stitching done. Pretty Winter piece. I stitch listening to the tv not really watching it.

Beautiful stitching!
I like silence when i stitch. Do watch tv when DH comes in.

Lots of great stitching there. I can't stitch in front of the TV, I need different glasses for the two distances, so I usually knit in the evenings (I can do that without looking at it)

You are doing great with getting quite a few of the 15 list done!
I sit in the kitchen and stitch. I talk with whoever is with me. If my husband is watching TV in the basement, I can hear it upstairs. He worked for an airline for many years. His hearing is fading.

You made great progress on your list, and it looks like you're really close to an other finish as well - go you! I also like to have the TV in the background when stitching. I agree on dialogue-heavy movies, but I got my boyfriend trained to explain to me what's happening otherwise ^_^

Excellent finishes! And I love your progress on the pumpkin tree - nearly done! Great job :D

You've got some great projects going. I like that idea of 15 in 15. Wow, I'd really have to get going if I was going to attempt that!

Jo, you nearly tricked me when I read about your A-Z challenge, lol. A moment I thought I had missed all your A-Z posts, rofl. I also wanted to read a lot of A-Zs but as I am always behind with my blog reading I just could follow three or four of them and wasn't able to comment on all of them. It was just too much. But it was very interesting.

You are really doing great on your 15 in 15 challenge. Great progress on the Pumpkin Tree. A funny tree indeed.

Congrats on the great finishes Jo. I sit in the kitchen during the day and stitch. I like the silence. I do sit in the living room in the evening and watch TV with hubby. Depending on whats on, I sometimes don't get much stitching done.

Wow...you have been busy! I stitch while listening to the TV...and I seem to miss so much, but I hate watching TV without having something to do with my hands!

Congrats for finishing 3 of your 15 - seems appropriate, 1/3 done, 1/3 of the year gone. Loving your pumpkins. Evalina did a great job this year, didn't she?

Wow you have been super productive!!!

Love, love, love Thine is the Trick! And Winter...I have that one and it's getting near the top of my list. :) blessings, marlene

Hmm, my favorite in this batch is probably Winter Wonder! Love all the shades of blue and purple. And Evalina's posts were great. I didn't comment on hardly any of the A-Z posts from anyone, but they were fun to read.

I do not like the TV on when stitching; I'm far too easily distracted and it leads to too many counting mistakes! So I listen to music, either video game/Disney soundtracks or trance or classical or anime radio or rock or (or, or, or). :D

Pretty stitching!! The pumpkins are so cute!!!
Hugs,
Lili

Well done on a successful month!!!

love your choices for stitching and thanks for taking time to come over and visit us.. I hope you love the A-Z challenges postings.. ;)

Beautiful pieces!! You have done lots of stitching:)
For me, TV or music anything is fine in the background. Sometimes, I just stitch in silence, in that case lot of thoughts come to my mind which may or may not be good for me. I worry a lot about lot of things and my husband doesn't like if I sit in silence .

Awesome stitching Jo, glad you made the most of the Bank Holiday Weekend - loved your comments on the chocolate orange fabric - Dawn really needs to sort that out lol! I have to have something on while I stitch, if it's the TV it has to be something with a lot of dialogue (love The West Wing for that!) - I think that's why I had a problem with Poldark because I can't hear glares and brooding looks lol!

You are stitching so many pretty designs. Always a pleasure to see your wonderful progress. I stitch in the living room where I have my floor lamp and like you I stitch with the TV on. Mostly movies or the PBS channel where they are no commercials and I really enjoy DIY shows/ gardening & Fixer Upper.
love Annette

I always so enjoy your blog posts, Jo. Lovely stitching to look at and a good chat, too - lol!

Congrats on your finishes! I love the Prairie Moon piece, so cool.

Wonderful finishes and progress. I particularly like the Winter Typography - have you stitched or are you planning to stitch the other 3 in the series?

Congrats on the finishes! Love the pumpkins in the new JN too.

Lovely finishes. Oh yes! Planet Rock rocks ^_^ I like having the radio on and it is so very true! I have no idea what most people on TV or film look like as I am usually too busy counting ^_^ XOX