More and more of my posts seem to be for one SAL or Activity or another these days.  Maybe it's because I sign up for so many?

Anyway, this is a little catch-up post on some things which don't fit into any of the SALs.

The first thing to show you is Finish Number 12 this year which was a gift for a blogging friend.  At the beginning of the year she posted her goals and hopes for 2014, one of which was "start a family". Immediately I thought "what can I stitch for that?" and started Googling fertility symbols. As well as alot of Earth Goddess, squatting women type stone carvings I found the Kokopelli

Isn't he cute?  He's a Native American fertility deity also associated with music (hence the pipe) and "an important conveyor of information and trinkets from afar, a Story Teller, par excellence".
Now doesn't he sound perfect for one blogger to stitch for another as a gift from overseas?  I found a lovely chart from Southwest Designs by Jenny Rasmussen.  It seems to be an old page and I can't find any other information or contact details for her.  Anyway, this is what I stitched up: 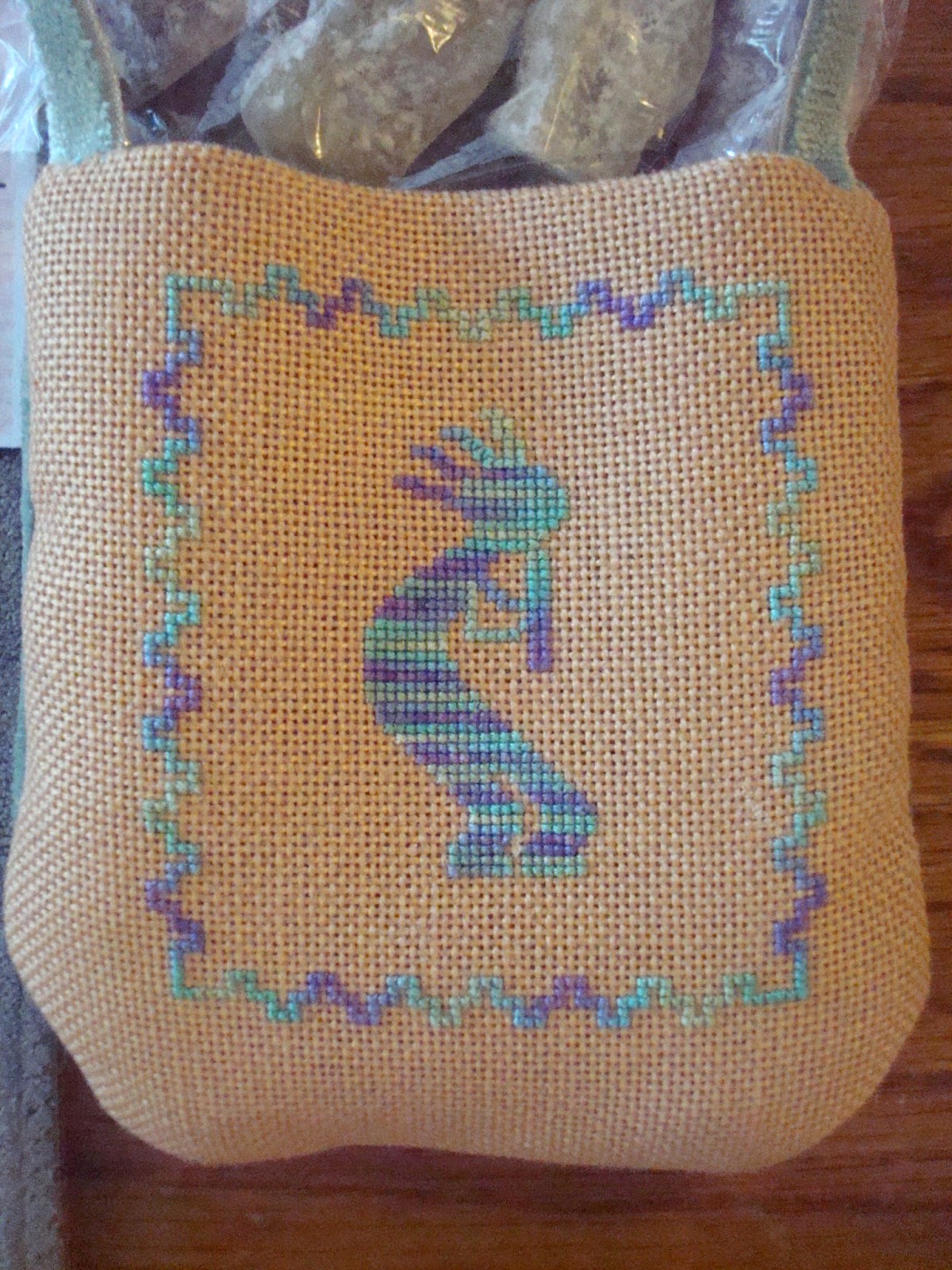 I stitched him on 32 count evenweave over 1 using a Jodyri Variegated thread called Peacock Feathers. 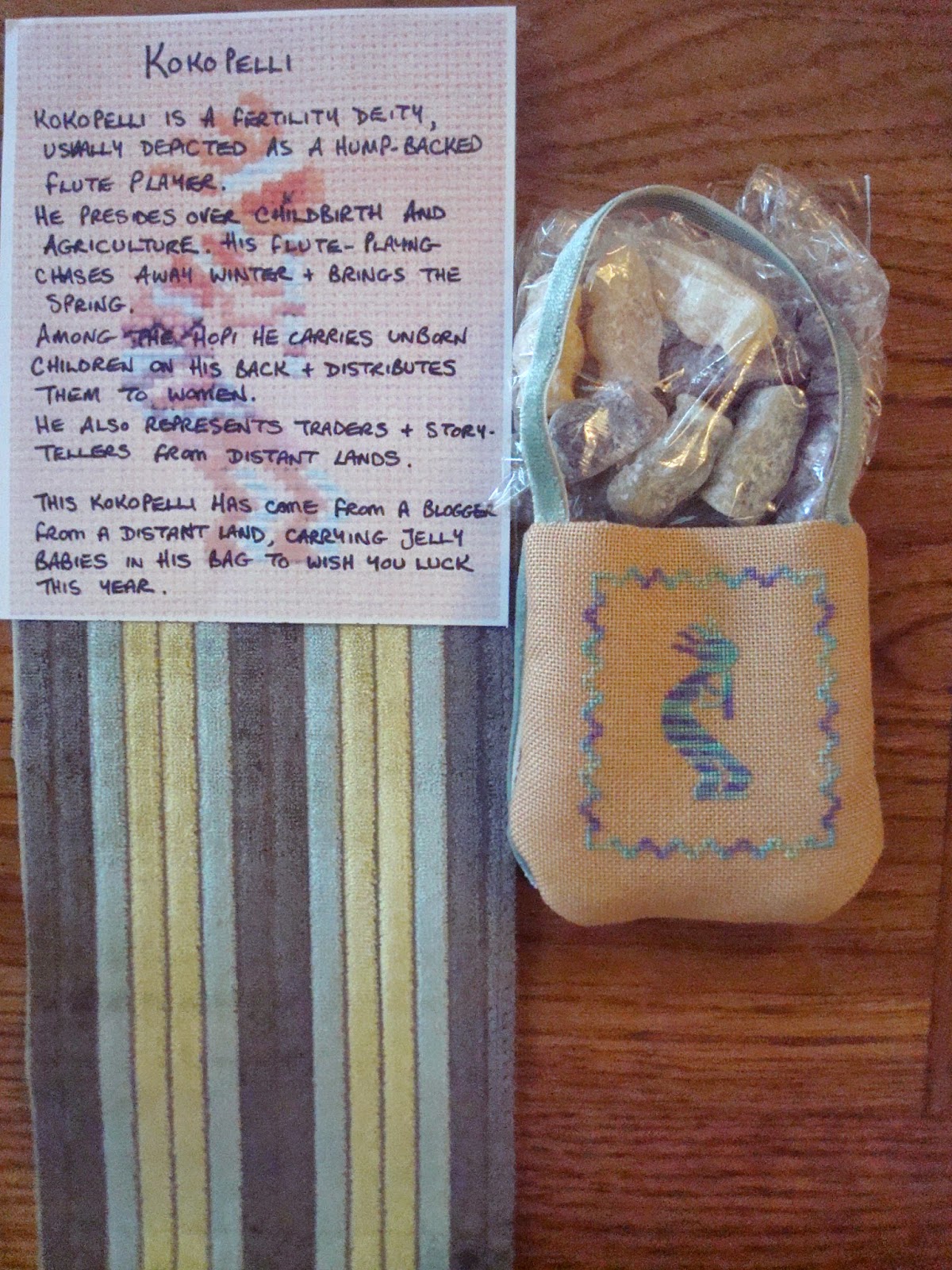 There are jellybabies wrapped in the bag.
The backing fabric is a velvet furnishing fabric sample.

The main focus of this month's stitching has been the Round Robin Band Sampler and my friend's Wedding Sampler but I also spent a week stitching on this design which was practically jumping out of the bag and yelling "Stitch Me!": 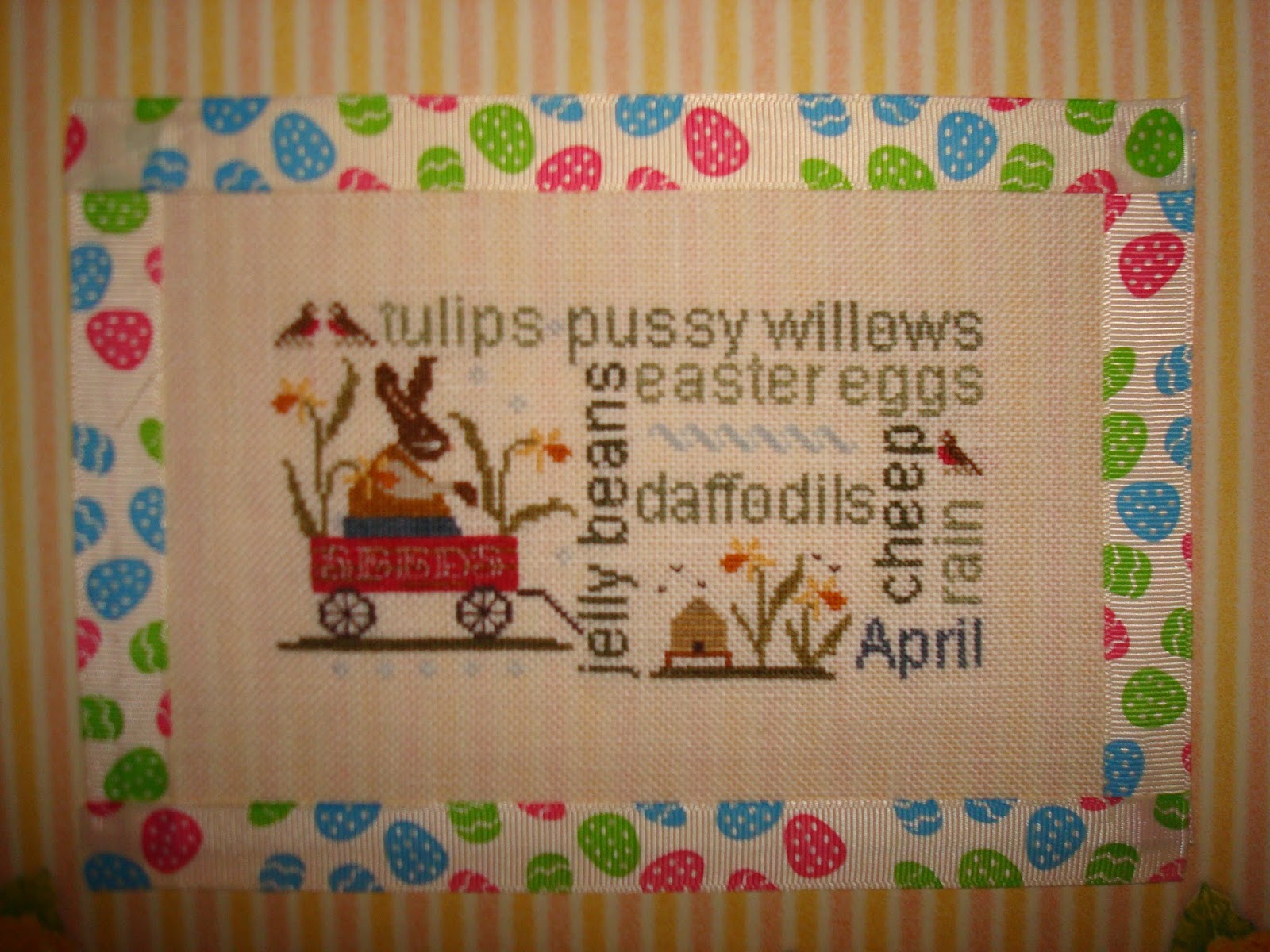 This is April Wordplay by With Thy Needle & Thread's Brenda Gervais.  I was sent this by Jenny from One Stitch Closer to Nirvana.  Jenny doesn't stitch or blog much at the moment because she has two adorable twin girls toddling around.  The best excuse for not stitching!

In the spirit of both Stitch from Stash and my WIPocalypse choices, I used a fabric sent to me by another blogger (Dulcinella, who also doesn't blog at the moment but I don't know why).  This is a 32 count lemon yellow fabric, stitched over one.  I converted the charted GAST to DMC but the colours were rather muddy (unlike the original GAST) so I just made my own colours up instead!  I used some nice 3000 greens for the lettering and a brighter red for the little trailer.  I also changed the word peeps to cheep because we don't have peeps here (I understand they are a type of sweet?).

The fabric isn't striped, they show through from the mount, but it's a good effect I am pleased with.

This is how I mounted the picture for my scrapbook using a nice piece of (recycled) Easter Egg ribbon round the edge: 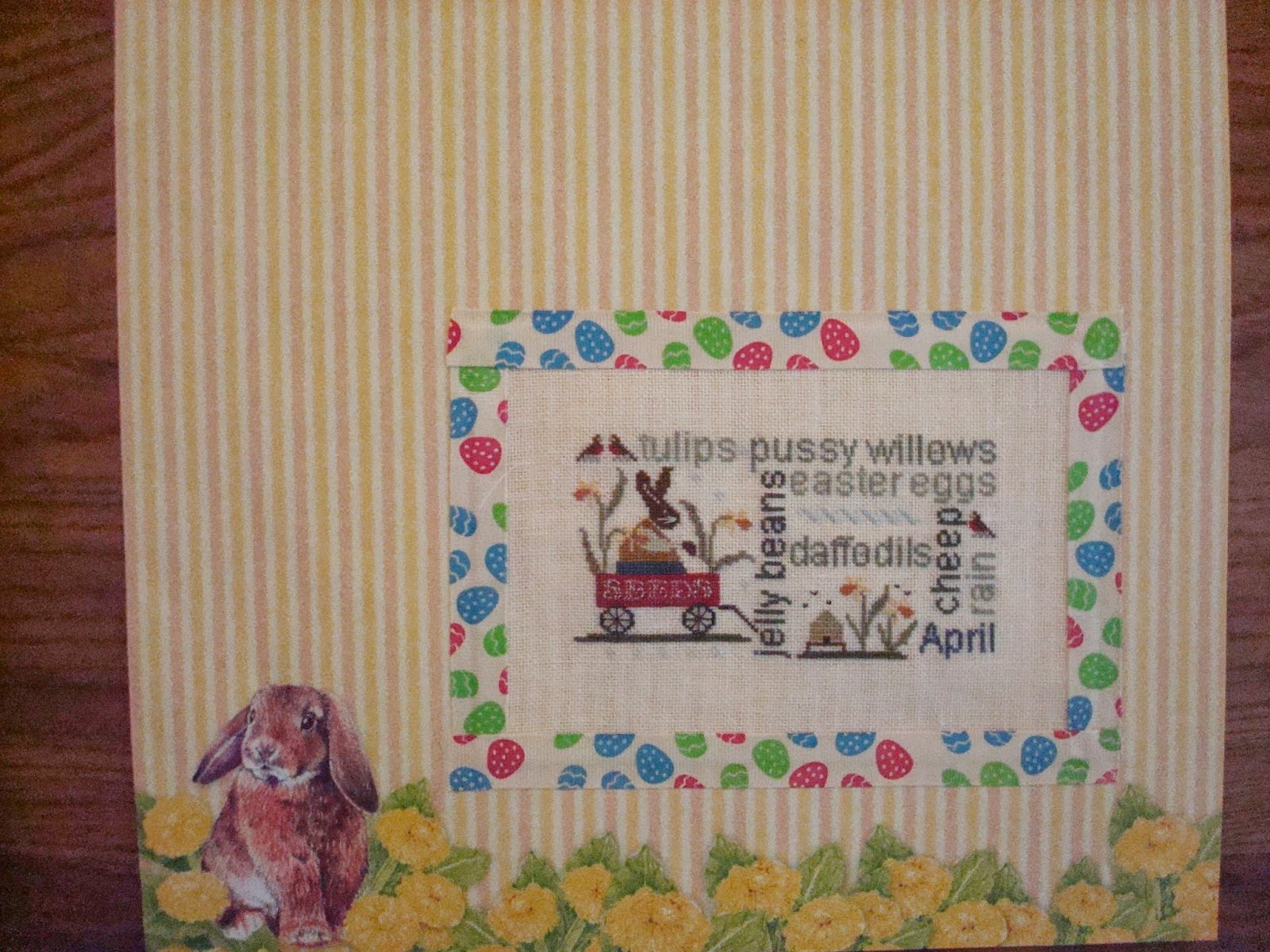 I wondered if anyone would like to swap this chart for any of the other Wordplay series?  I have got January's Wordplay in my stash already but I would be happy to have any of the other months in exchange.  I figure if I get them one at a time they are more likely to actually get stitched!

Posted by Jo who can't think of a clever nickname at 19:41

Hi Jo,
What a lovely gift for your friend and the April word play is lovely, I must look up that range of charts.

Gorgeous, gorgeous stitching Jo. Both lovely! I would love to swap you but don't have any of them...sorry!

Hello, I love the special gift you stitched for your friend. it is cute indeed. And the colors you used are marvelous.
Lovely stitching :)
Sorry I dont have any of those charts...
Smiles :)

Yes, the Kokopelli is the perfect gift to stitch for your friend. He is all over Arizona and I have one in my yard....not for the fertility though! for the music!

Love the new April wordplay finish! These monthly designs are so very sweet. I can see how this one would be jumping right out to you, it is all about Spring right now!

Nice way to finish the Kokopelli. The word play is really cute - yes Peeps are marshmallow chicks typically yellow but they do come in other colors. I will admit that I cannot stand them and always traded them to my sister for her jelly beans. They used to do only chicks but now have rabbits and have added ghosts for Halloween. The Washington Post (newspaper) has a Peeps diorama contest each year. There are some amazing entries - some people really have too much time on their hands!! LOL!

Hi Jo, you are such a marvellous stitching friend. Such a thoughtful gift.

The April Wordplay is gorgeous - I would love to swap but I know that I have January wordplay and maybe, Feb wordplay but I am not sure about the latter. I must have a look and I will let you know. But if someone else wishes to exchange with you in the meantime that is okay.
hugs, Kaye

Kokopelli is just adorable, never thought I'd find myself thinking a fertility symbol was adorable!
The wordplay sampler is lovely too, the shadow stripe effect from the backing works really well.

Beautiful Kokopelli you stitched and love the color thread used.
Beautiful April word play finish. I don't have any of those word play charts or I would send you.
Very lovely stitching. love Annette

You're so cool Jo, that is such a brilliant gift. I love the Peacock feathers thread against the fabby.

April Wordplay is great too, sorry I don't have any of those charts either.
Alicia xo

Those are lovely projects, Jo.

Sadly, I don't have any of the other Wordplay charts. :(

Congrats on the finish!! Your April word play looks very nice!! The border print is cute!! Is it a fabric or ribbon?

What a perfectly named thread you chose for the fertility symbol, so carefully thought out Jo, such an amazing gift for your friend.

The April wordplay is splendid, no wonder you couldn't resist stitching that up in time for Easter.

What a wonderful, thoughtful gift to make for your friend who wants to start a family this year. I wish her the best of luck!

Your Worldplay looks great and I just love the Eastery ribbon you used!

:D Big grin...heheheeeee....So yes, the word play...I have February, March and April so I could swap you either February or March for your January but I would need one of the two back by that time next year! Lol! I am the worst when it comes to stitching monthly series. I always plan on doing it that month then never get to it! Let me know Jo! Hugs