Each month Heather thinks up a theme for us to stitch to, or in my case, a theme to somehow shoe-horn my existing stitching into, no matter how tenuous the link!

Jumanji June
Is it a jungle out there in your stash? Give some love to the projects with animals or birds.

This theme was a piece of cake!  Absolutely no shoe-horning required this month.

I started with the JB Alphabet Kitty for June in patriotic red, white and blue for our Queen's Official Birthday and Coronation Diamond Anniversary.  I also finished the May Kitty using the gingham the majority of people liked.  Here they both are: 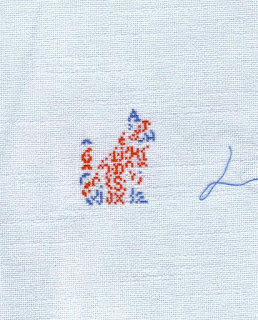 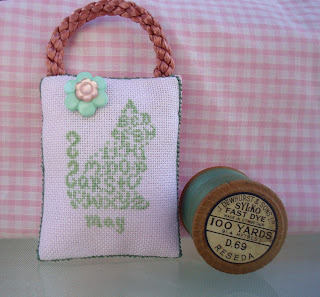 I used a vintage cotton thread to sew up the little ornie.  I understand those wooden reels are quite sought after now.

Next animals are the Dragon and the Goose, not a lesser-known Fairy Tale but the sixth in the Dragon Dreams 12 Dragonlets of Christmas series. 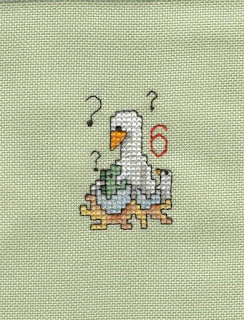 The third living creature is the fishies on my Hear the Sea Call sampler.  I sourced some little mother-of-pearl fishes from an Ebay shop, the shells came from some old trim in the craft box and the abalone type stones came from the local craft shop.  I framed it in a simple raw wood box frame. 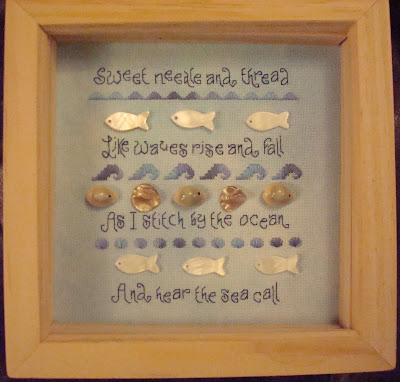 I decided to use this for my FB profile photo and to my surprise I got a comment from the designer Sue Donnelly of the Stitcher's Hideaway.  She was very interested to see my finish and told me she is putting the kit together very soon so you can all buy it for yourselves.  She also showed us a lovely Autumn design on orange fabric which would make a great companion piece.

In the evenings I've also been stitching a type of fish, a mermaid is a half-fish isn't she?  There was a very interesting chat on FB about mermaids and how they have little mer-babies.  Obviously they can breastfeed so presumably they have live young rather than lay fisheggs!!  Maybe they find them under sea-cabbages. Nora Corbett also told us she's had complaints in some States of America about the lack of clothing on her mermaids.  whatever next!

Anyway, my mermaid is Shimmering Mermaid for Karen's Round Robin.   She is beautiful with her lovely free-flowing hair.  Karen stitched the shells and seaweed first then specified which parts of the mermaids to stitch so they are not confined to boxes but float on the sea of her fabric. 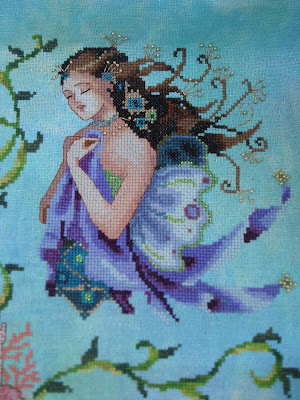 And here is the full piece, only one block to go.  This is a Large Mirabilia RR, each block is 5,000 stitches rather than the usual 2,500 so we have been given longer to stitch each round and there are three groups of four stitchers.  Imagine if all of us were stitching on one piece each with 12 blocks!!  It would be massive and take about 3 years to come back to you! 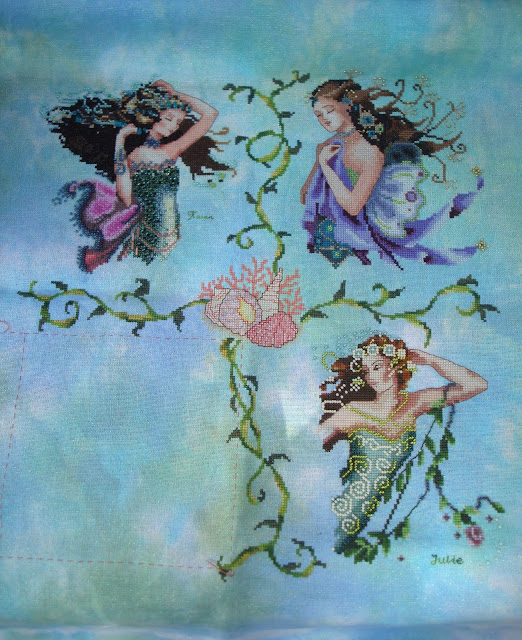 In the past months I have also stitched an "anti-theme" piece and this month was no exception.  So what's the opposite of animals, living creatures?  Easy, undead creatures!  So here is Mummy Kitty once again: 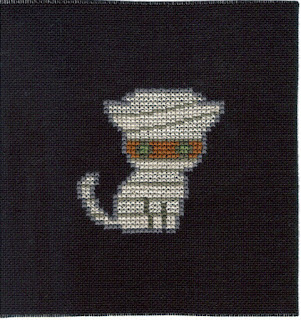 Jubilee July
It's time to celebrate! What are you celebrating this year? Stitch on your holiday-related projects, OR find some WIPs you know you'll never finish and set them free .

Not sure what format this will take.  I have some end-of-term present stitching to do, that's a holiday and a celebration.  Also a couple of birthday cards/presents to stitch.  And a wedding sampler.  I think that takes care of the theme for now.

Finally, it's July tomorrow so I'll be starting the Summer Blog Hop very soon.  One lucky participant will be receiving the first emailed postcard to show on their blog.  There's still plenty of time to join in, just click on the link to the top right to find out how.
Posted by Jo who can't think of a clever nickname at 19:10

Nice pieces. Your Mermaids are stunning! I also liked that stitching by the sea one.

Well you definitely knocked this them out of the park! Have to laugh at your anti-them. Those mermaids are just stunning!

oooo nice to see you managed to do this one with out too much fudging heheheheh ... love those mermaids and your wee cats are cute and yes don't throw out that cotton reel .... I have a three drawer chest that was my mums with old cottons in it with Dewhurst sylko on it :) love mouse xxxxxx

Lovely stitching, especially the cats.
Have a good week (:

Fabulous finishes. The mermaid is stunning. Your shell piece is quaint

The mermaids are a super RR, such a pretty fabric too.
If only we could sit and stitch by the sea all day, I do like the sound of crashing waves on the shoreline.

What a lovely herd of animals! That mermaid RR is going to be absolutely gorgeous. And I love what you did with the sea sampler. I picked up some shells with holes in them on the beach last time just so I could use them in needlework. =)

Lovely line-up of creatures! The mermaid is just stunning.

Lovely stitching Jo, I love the little sea sampler, and the mermaids are beautiful.
Thanks for the reminder about the blog hop, off to mail you a picture now

Wow lovely collection of projects you have there. You probably guessed though that my favourite is the Mermaid RR. It looks amazing so far and will be absolutely stunning when they are all swimming together.
xox Alicia

The Mermaid RR is stunning!! I can't wait to see it all completed.
I'm looking forward to the summer blog hop. Should be fun!

Those mermaids are just gorgeous! I would imagine that those who have complained about the lack of clothing, don't watch much television either - I've seen people wearing a lot less than these mermaids. :)

Your kitties and fish and mermaids are beautiful! It sounds like you're ready for the July theme, too.

Oh wow! I'm the lucky participant to start the Summer Blog Hop! I have posted the first photo (from you) on my blog: http://debbiescrossstitch.blogspot.com/2013/07/summer-blog-hop.html

I love your Hear the Sea Call - I'll be looking out for the Blog Hop but being a newbie please tell if I have missed doing something :-)

Oh my!! That Mirabilia RR is gorgeous!! :D

Gorgeous stitching!
The Summer pattern with the fishes is amazing!What a lovely idea!!
Your mermaids stitching is also so pretty!!!

The Mira Mermaid RR is amazing!

You had a busy June! The Mira RR is beautiful. And I love the additions you made to your seaside sampler.

Wow, so many living things for the June theme - and one undead, lol! I remember when you mentioned it, so I couldn't wait to actually see it. It's so cute!

Wow, I am in total awe of this gorgeous RR! The mermaids are beautiful - the RR design is amazing :)
You have certainly been very busy stitching over the last month :)