Here's the round-up for the progress since the last Full Moon.

12. Prairie Moon, Thine is the Trick and the Treat:

Great progress on this one. 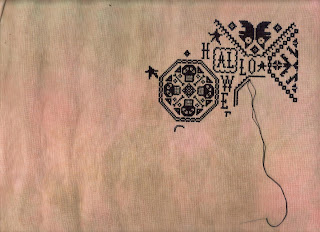 I've reached the top right hand corner, there's a big old Jack O'Lantern next and I've nearly done two pages.  There are 6 pages in total.  I'm going to stitch until the 31st then put it into my New Year rotation.

Yay, I stitched another Just Nan design at last.  This is my progress on Frightful: 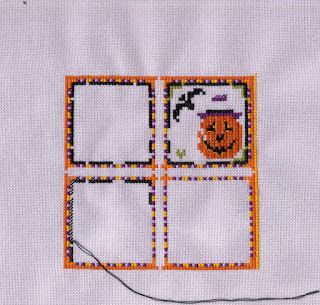 I have a neat trick for the black coverage.  Stitch the lines of crosses as usual.  If you can see too much fabric between them then run a thread underneath the whole line just coming up at one end and going down at the other.  If you enlarge the photo you'll see the bottom left box is just crosses (and some half crosses I'm about to complete) and the top two boxes have the extra thread under the black crosses.  The bat and pumpkin details are stitched with three strands which I'll use for the rest of the motifs

October is Obligation October.  I stitched a number of cards and two Round Robins for this theme.  You've seen them all before but here they are again: 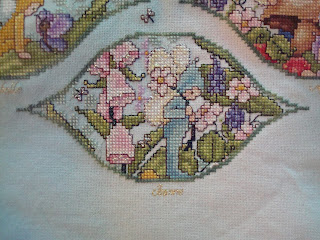 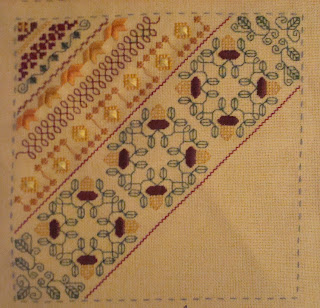 Autumn for Cat's Seasons Round Robin 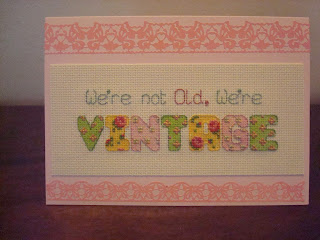 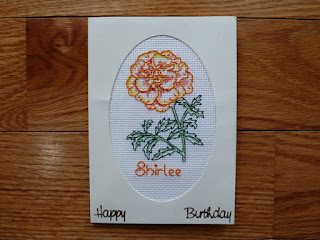 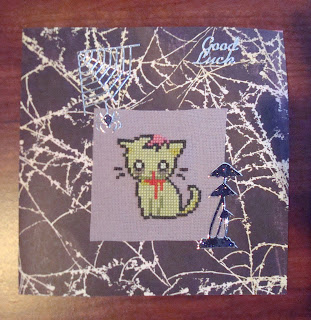 Zombie Kitty 1 made into a card 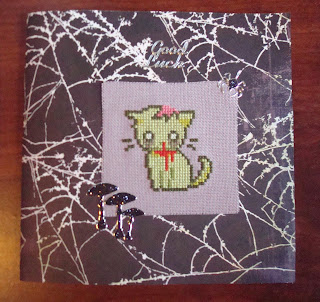 Zombie Kitty 2 made into a card

November's Theme is Nail It November - What's lying around that's so close to being finished you can't stand it anymore? Get to it and finish it!

This is a not such a good one for me!  I'm not going to finish any of my four main WIPS as I have Round Robins which must take precedence over all other projects.  I also have my own project to start for the Large Mira RR starting in 2013.  I could always do some "finishing" finishing and sew up an ornie or two I suppose.  I could also "nail" my list for my "13 in '13".

Finally, the emails have been sent to the participants of the Hallowe'en Blog Hop, if you signed up and haven't got one then let me know.  Everyone else can enter the Mystery Phrase Competition starting the 31st October.  I'm putting a little prize together, it will feature a skein of Glow-in-the-Dark thread and other stuff!

Posted by Jo who can't think of a clever nickname at 21:17

So many great WIPs at once & all looking wonderful thus far! I would need to be medicated if I had more than one going at a time : ) All the cards look great!

cooo you really have been busy :) can't wait to see what you decide to nail for November :)
love mouse xxxx

Great progress on your WIPs! Love your trick with the black thread--seems I'm always having coverage problems with black. I'll have to try it!

You've had a really productive month!

Plenty of lovely work! I love your finish on your zombie cat!!

I always love to have a loom at other stitchers' WIPs, there's always a lot to discover and a big chance to add things to my wish list, lol.
Great progress on your WIPs.

Wow, that's an amazing amount of stitching in the last month. The birthday cards are lovely and much appreciated I am sure.

wow..great progress on your WIPs!i love all of them so much..
big hugs cucki xx

Nice going on the WIPs - love the Prairie Moon :-)

Great tip on fixing the skimpy coverage!! You had a busy stitching month!!

looking great, and thanks for the great tip for black threads :-)

You did great on Obligation October! Love the fabric you're using for Thine is the Trick or the Treat. What are you using? This is one I'd like to start at some point.

I think finishing your part on the round robins would easily count as a finish for Nail It November, don't you?

hi Jo! OMG all your projects are so beautiful I dont know which one I should comment on! But the first that draw my attention was your card: WE ARE NOT OLD BUT VINTAGE :)) LOOOOOOOOOOOVE it!

I love the way you finished the little zombie kities!! Those mushrooms are great, lol!

That's a great idea for the black floss! I'm usually bothered by fabric showing between the stitches so this will be stored away in my cluttered brain to (hopefully) be recalled when needed~ :D

Gosh, you got so much done!!! This must be what not being addicted to a game feels like..... hehehe.