This is what I worked on for IHSW, it's the design from The Gift of Stitching magazine which Kathy and I are stitched along with Claire and Cucki (plus anyone else who cares to join us).  See Kathy's Blog for more details.  We have the full blessing of Gift of Stitching magazine to encourage as many people to SAL with us as possible!  We're also posting pics to their FB page.﻿ 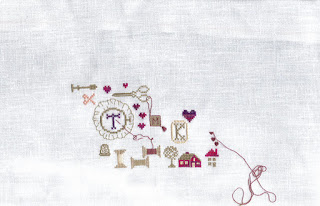 Isn't it just darling, as Dame Edna would say :-).  Mine is stitched on 40 count Newcastle which is lovely but does crease.  That tiny over 1 M was the worst bit to stitch so far but the satin stitch thread spools were great.  Sometimes I'm using 2 strands of DMC and sometimes 1, it's producing interesting results and I like the versatility while still only using 5 different colours.

I have also discovered something new to me - size 28 needles.  Old hands may laugh at me, but I've always used whatever needles came with kits and have quite a supply.  I got a pack of gold 24s free with something or other ages back and love them.  However I kept seeing reference to size 28s so got a pack - aren't they amazing!!   I love them.  And you can use the thread down to the last mm as they're so short.

I've also been stitching Green Goddess and the Periphaeria SAL which is in the final stages.  Pictures to follow.

I'm really enjoying all the answers to the Coventry mini-comp from my last post.  Yes, there is a convent there and some people believe that's where the name came from and others believe it was named after an Anglo-Saxon called Cofa and his tree which marked the boundary of his land.  A winner will be drawn this weekend so there's still time to enter.

Finally I received a belated Birthday present from the City Stitcher AKA Hannah - the JCS Hallowe'en and Christmas ornament issues!   Both of them!!  I'm so excited, now I just need to learn how to finish neatly.  I can do three sides very nicely but it's the fourth one after you've stuffed the thing I have trouble with.  I whip-stitched the first one I did but the corners look odd compared to the other 2 corners.  Maybe I should have whip-stitched all four sides?  Or just get some cord and cover them up.

Finally, does anyone spell Hallowe'en with an apostrophe any more?  I always do because it's short for All Hallows Even but no-one else seems to do so.  Maybe I'm just really old fashioned...
Posted by Jo who can't think of a clever nickname at 14:04

that Sal is gorgeous ... and if doing whip stitching better to do all four sides :) otherwise .. sew round using a sewing machine right sides together and turn rights sides out and then stitch closed using ladder stitch which done right goes invisible sooo you can tell its been done by hand .... does that make sense ??? can draw diagrams if need more help :) love mouse xxxx

hello dear, sal is looking so lovely so far..i love the colors so much..
keep well dear and happy stitching.xx

Your stitching is looking great.
My Hallowe'en also sports an apostrophe,if it doesn't it is a slip up! I can hardly justify having badgered my youngest about his spelling and grammar through High School if I don't follow my own rules :) He is an articulate and literate young man of 25 now,so some of my nagging sunk in :)

Your SAL progress is looking great. Congrats on the belated birthday pressie. My finishing is not great either so know just how you feel.

Your SAL looks great.
When you leave a gap for turning your ornaments just leave the centr third of the last side open, that way all your corners are machined.
You are quite right, it should have an apostrophe, but people only seem to put them where they DON'T belong these days. Sigh.

Lovely stitching on your SAL. My favorite needles come from Lydia at Wyndham Needleworks ~ I guard them like they were gold. :)

Ooh, wait for me, Jo, I'll definitely join you, I started My Lovely Sewing Tools then put it right down again so would love to SAL! Apostrophe's are the worst, lol, people use them when it is just a plural and only need an S on the end! Drive's me insane :))))!

Love what you've done for the SAL piece, Jo. :D

Oh yes, I love my 28size needles... just ordered another 3 packs the other day. Can't wait to see pics of GG and Periphaeria.

I never knew that Halloween was spelt with an apostrophe...

Your stitching is looking really great!
I was always told to spell Hallowe'en with the apostrophe but no-one seems to do it that way nowadays!

Your SAL is beautiful. Over-1 on 40 count? Wow! I use 28 needles for just about everything - Bohin is my favorite brand. I understand why the apostrophe should be there, but I was never taught to add it.

Jo, your SAL piece is coming along beautifully....your stitching is so delicate, stitched mostly over 1. Mine is stitched over two, on 36 count.

Our LNS owner just passed out packages of the Bohin 28 needles last week at Stitching group. I must admit that they are the smoothest needles to work with that I have ever used.

Thank you for sharing about the original spelling of Hallowe'en. I love it and will spell it that way from now on, and explain it to others here too!

Beautiful new project. It will be fun watching your progress. I love your Hallowe'en spelling. I think I'll adopt it from now on.