I won something and need your help!

I won something!  Raven posted recently about a sampler she's stitching and noticed a small error when she posted the photo on her blog.  She invited people to try "guess the error".  I think stitching people are just too kind to point out errors in other people's work and only two of us tried.  Raven sent us both a gift certificate to use at Down Sunshine Lane, a lovely online needlework shop.  One of the things I like about the stitching community is our reluctance to criticise each other's work.  I used to attend alot of model soldier and model airplane conventions (don't ask).  The guys there were so critical of each other's work - "actually I think you'll find they didn't use that particular buckle until November 1916 whereas your figure is from early 1916".

So now I have to decide what to buy....  I have enough pennies to buy two of the following:


Prairie Moon's - Thine is the Trick and the Treat

Debbie Draper - Ribbons.  This one comes with floss: 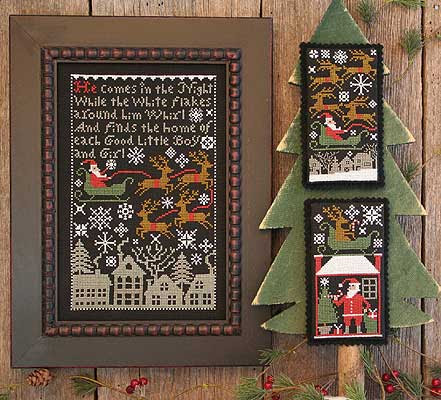 What do you all think?  I'm going to try do a little poll in my right hand side bar.  Wish me luck!
Other news:  I have finished Part 1 of iStitch's new SAL.  Here it is: 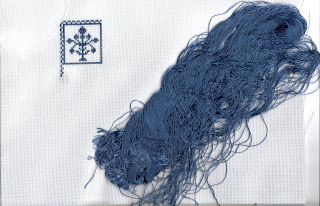 I'm stitching it on 36 count white evenweave over 2.  The blue mass is a hand-dyed silk from De Havilland threads.  I have had it forever since I used to go to the Olympia Shows in London pre-kids.  It was all neatly plaited until I cut it loose.  Now it looks like my hair when I've had it plaited for a day or two, except my hair is not currently blue.  My hair is dark brown, orange (where the red is growing out) and white. ﻿
﻿
Posted by Jo who can't think of a clever nickname at 21:04

Uh-oh, I think I'll have to add that Masquerade to my already huge wishlist... Congrats on the win!

Lucky you, I tried to look but couldn't find any fault! But anyway I personally would have to get the Victoria's sampler as I just think they are so pretty!!

well done and ooo I've been to one or two model soldiers wargames fairs ..lol and have voted for the prairies moon trick or treat one and the Victoria sampler Christmas village and then if you get them you can pass them on to me heheheheh ;) method in my madness ..lol love mouse xxxxx

O Dear...having to pick 2 out of 5 beautiful designs is cruel. They are all beautiful. I love the Victoria Samplers. The detail is amazing. That Halloween one is too cool to. Perhaps meditation will make deciding easier...LOL then again it most likely won't.

Congrats on your win. :D

I voted for Masquerade and the Chrismas Village, although choosing was tough!!

Good for you! I like Thine is the Trick and the Treat & Christmas Village - but also will include Masquerade! Darn, now I want to go shopping.

Congrats on your win. I voted for Trick and Treat and Christmas Village.

congratulations on your win dear..i will vote for santa village sampler and masquerade..
have fun xx

Congratulations on the win! You've picked out some beautiful pieces. I vote for Christmas Village and Thine is the Trick and the Treat. But whichever ones you pick you really can't lose. Love you're color choice for iStitch's SAL. I'd never heard of DeHavilland threads.

Congratulations Jo! I voted for The Xmas Village and the PS chart. I loooove PS, so I have to auto-vote for that.... I am also really attracted to the lace looking parts and the idyllic scenes on the Christmas sampler.
Either way, you can't go wrong; you picket a bunch of beauties.

Congrats on your win! You have some touch choices to make. I like Prairie Moon's Trick or Treat. You are off to a good start with the SAL.

Congratulations on your win! Yay!
I wish you could stretch it to 3 choices as I love the Victoria samplers plus the Ink Circles Masquerade. But if you only have 2 then I would pick Masquerade and Christmas village. For my taste they stand out. Good luck with your choice. xoxo

Congrats on the win, Jo. I voted for Ribbons and Christmas Village. :)

Love your new start. The blue on white is just great!

Congrats on your great win, I made my vote. Be sure to let us know what you decide on.

Lucky you! The poll is closed now but I would have voted for the winning stitcheries. Did you go with the popular vote? Have fun getting your new designs.