What a busy week!

What a busy week!  I had a small shared stall at a craft fair on Bank Holiday Monday.  My friend does decoupage and "shabby chic" boxes and I had my cross-stitch.   It was quiet but I sold 2 cards, a picture and took some commissions for wedding samplers and some name plates too.  The fair is held in our church hall every Bank Holiday to raise money for Hope HIV.  There are only a dozen stalls and everyone is very friendly.  I got some "Pandoro" style beads which are meant to be threaded onto a bracelet but which will look good on a stitched piece. 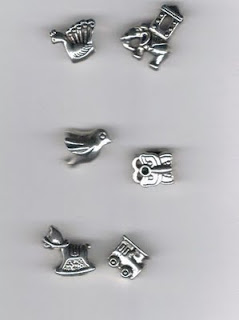 Aren't they sweet?  The nice man gave me "stall-holder's discount" so they were only 50p each!  There are several Just Nan squares which will be perfect for the top four.  The bottom two are more for children's birth samplers.

I spent most of last weekend stitching cards, here are some of those I finished: 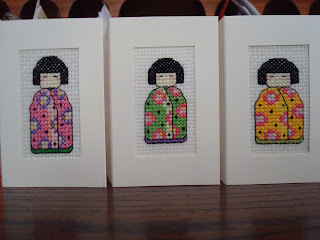 These are from the Joan Elliott Oriental Booklet free with WOCS 177.  I stitched them on scraps of 14 count aida - the middle one the aida had been washed and ironed and shrunk slightly, the left hand one the aida was landscape and the right hand one was portrait.  It just shows that the squares in aida are not necessarily square! 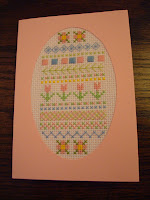 Helen Philipp's Design adapted to fit in an oval. 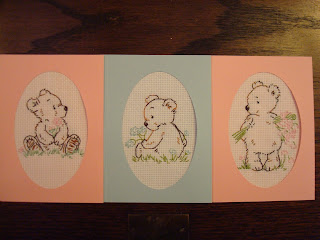 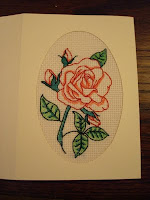 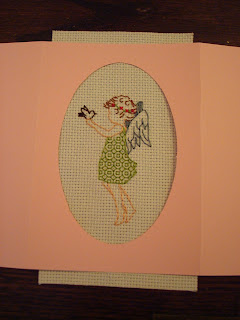 ﻿The bears were designed just using back-stitch and having seen how effective they were and how quick to stitch I decided to try with the rose from WOCS.  The red and green shading effect is simply fabric pens coloured in after the back-stitch was completed.  The little fairy is the same.  She is part of an ABC with a different fairy for each letter.  I removed the letter, changed her hair to make it more suitable for this technique and used blackwork to fill her dress in.
Interestingly, these two were the two that sold!  I was pleased because I'd put my own artistic input into them rather than just stitching someone else's design "as is".

School has taken up most of the week, I help out with a Year 3 class and also run a Road Safety Club for Years 4 and 5.  Stitching-wise I've been slogging through "C is for Coven" from the Dark Alphabet.  It is almost solid stitching 1 over 1 and not very exciting to do!  But it does look good now I am almost finished.  For light relief I have been stitching another Joan Elliot - the waving cat from her Oriental Booklet on red aida.  The waving cat is a lucky symbol in China, this will be for the large boy.

And talking of cats - here is a gratuitous picture of a cute cat!  We have time-shares in a stray cat, we do breakfast and tea, my neighbour does lunch and supper it seems!  We were all in the garden and the cat had been getting lots of fuss and attention then had gone off for a rest.  She seemed to think this was a good place to be!  She then tried to roll over in the pot! 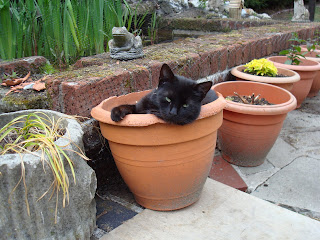 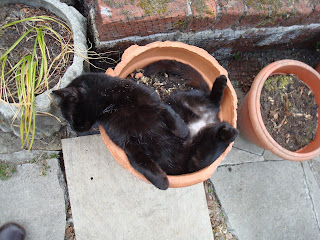 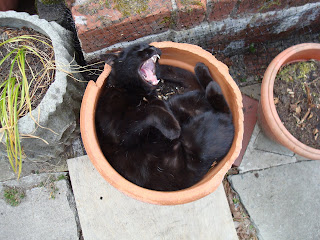 Almost forgot!!!  The new Joan Elliott book-a-zine (as she calls it!) is out in the UK.  It's amazing and only £9.99, it's sold out online already but should be in overseas shops by the end of May.  So keep your eyes peeled.﻿

Posted by Jo who can't think of a clever nickname at 13:08

ooo well done on the craft stall :) you gotta start somewhere :)love the cards that sold :) and the cat is soooo cute :) keep up the good work love mouse xxxx

You're braver than I to attempt a craft stall. My parents did those years ago and it seemed anything but relaxing! A timeshare cat doesn't seem like such a bad idea, although I doubt anyone would like to share any of my 3! Very cute pictures. Thank you for your comment on my blog about using short lengths of thread. I frequently do the same thing.

HI Jo, you certainly got lots of stitching done while running your craft stall. I love all your cards. The little japanese women are very cute and I love the cards with the backstitching and coloured pen shading. I am not surprised they sold as they are lovely and a bit different.

I love your share cat, just like a cat to work out how to best get fed.

Finally to answer the question you asked about tree of stitches on my blog the tree is charted, so you get the stitch instructions and the chart each fortnight. You get to choose the floss you use, and I will add some beads for sparkle. There are some lovely variations being done.

Love your pictures of that black cat

Loved the cards, esp. the designs modified by you. Thats a lot of stitching for the week. Great job on the craft shop