IHSW weekend and a new letter

Last weekend was an IHSW (International Hermit and Stitch Weekend), see Random Ramblings for more details.  Since the birth of the small boy I have no social life so every weekend is a Hermitage for me!  Anyway I started my 4th project in my 11 in '11, it's very Rolf Harris* at the moment.  There's about a week's worth of evening stitching here (2 hours an evening).  Hopefully it will get more interesting soon. 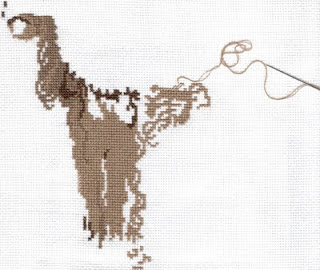 The other project I'm working on during the day is the cover kit from WOCS which is a flower fairy.  A certain friend of mine who shall be nameless called Hannah was on the Reader's panel this month and described it as "a nice quick stitch".  It is not nice and it is not quick!  The threads were horrendous to sort out, so many shades of brown, beige and peach.  Luckily they had given the DMC numbers so I was able to compare them with the colours in my stash, otherwise I would have mislabelled at least 6 of them!  It's been a tricky stitch too but does look nice.  I have an idea for framing in one of my favourite box frames and look forward to posting it here.
The next part of The Dark Alphabet is out this week, D is for Devil.  A Note of Friendship have chosen a spinning monkey to represent the devil.  Apparently this was used in Dutch samplers, they say "A "spinning monkey" is an iconic representation of the Devil, standing for folly, laziness, lechery, and vanity. His punishment is that he will be turned into thread."  So there you are, educational as well!  The pinning is an in a spinning thread on a staff not spinning round in a circle getting dizzy a la small boy.  This letter features a stitch called "Detached Buttonhole Stitch" which looks suitably fiendish to stitch.  I think I will wait to see someone else's stitcher version before attempting this letter.  I have stitched A and B and they are proudly displayed on ANOF's gallery.  I've started C is for Coven but put it aside to keep my Cover Kit Resolution for April.
﻿* Can you tell what it is yet?
Posted by Jo who can't think of a clever nickname at 20:32

Hi JO :) love the rolf harris hehehe detached button hole stitch is quite easy honest ... once you have got the initial long stitch in the right place then you just do button hole stitch over that long stitch not going into the fabric .. if you go on to the next row down you do the same stitch through the loops of the stitch above ... it resembles tiny crocheting:) once you have got the shape you want you then go down into the fabbie to finish off :) hope that helps love mouse xxxxx

Hi Jo, just found your lovely blog, after you left the link on the comment on mine :) Lovely stitching, but no, I haveno idea what it is yet. If I squint it *could* be an elephant, but I guess that's just the shape of what you've done do far!!

Looks like a long-haired dog..... LOL. Looks great though. :D

I have to agree with Joysze, the first thing I thought was that it looked like a furry dog.

As for the buttonhole stitch, yikes, I can't make any sense of it after reading about it. I would have to see step by step tutorial for that one. But thank you for linking to the Alphabet, I downloaded the A-D charts. :)

Hee hee, this is a good game! I think it looks like a llama TBH. I added some pink last night because I was soooooooo bored with brown. I could never be one of those people who stitch all of one colour then all of another :-)

Is it a horse or pony?

ok meant to edit but that wasn't an option :p

Good job on your blob. It reminds me of my big blob in the living room that I need to work on.

Thanks for the comment on my post. The bookmark patterns came out of the Cross-Stitch and Needle work September 2007 and are done by Joan Elliott!

I'm getting good - I can recognise a JE at 20 paces!
I've set my comments up so they appear without the edit or a captcha thingie. I find it time-consuming on other people's blogs. But if I start getting lots of offers for Viagra or Russian ladies who want to marry me then I might reconsider!
No, it's not a horse or pony. I added some pale blue last night.

Hmmm, that is a real puzzle... Is it a dancing person? Whatever it is, it looks like you have gotten quite a bit stitched!

I love the Dark Alphabet, by the way. Thanks so much for sharing the link with us. Are you going to stitch all the letters together?

re the Dark Alphabet, I've planned a sampler of 7 x 4 blocks so 28 in total. I've stitched most of the border already in 2 over 2, the rest will be 1 over 1 which is why I'm stuck on C, it's so densely stitched!

no idea what it is jo. as for the flower fairy cover kit. after youve said its a pain to sort the colours i will too get my dmc colours out and sort them out that way. i think it takes as long to sort the threads at times as to stitch the piece. lol