The first TUSAL of the year is here, only a few scraps in my tins: 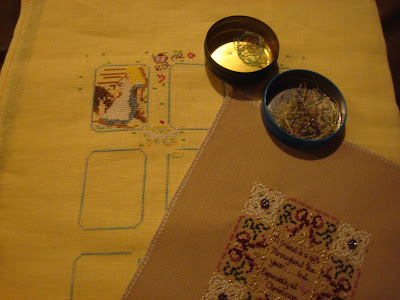 The left hand tin is my travelling tin and the right hand tin lives in my kitchen, which is where I stitch the most.


The project on the left is the new Alice in Wonderland SAL by Amanda Butler for Cross Stitcher magazine.  The border was published in issue 353 and the first block in issue 354 which isn't due out until 28th January but subscribers get their issue early. 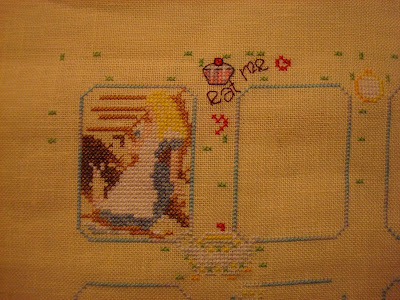 I think you can see that is Alice in her giant form, watching the White Rabbit scurry down the corridor.  The back stitching will really make it clear!  I am trying something different with this project - stitching with one thread over 2 to give a more sketchy look to the colours.

If it doesn't work I shall be stitching over each x again.  At least there will be no frogging involved!

The second project is finally finished!  This was started back in Maynia 2018 and then picked up again in September 2019.  Unfortunately I put it aside for Dark October and didn't really go back to it until this January. 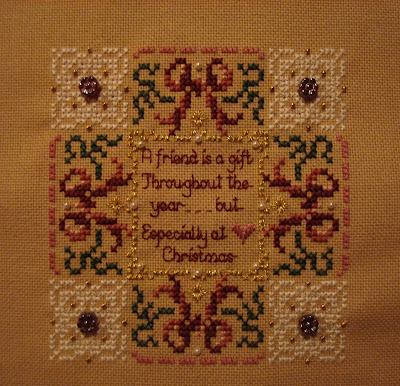 It was only when I started on the white corner pieces that I realised this was an un-evenweave!  So the piece is not square.  Luckily it looks OK being slightly elongated. 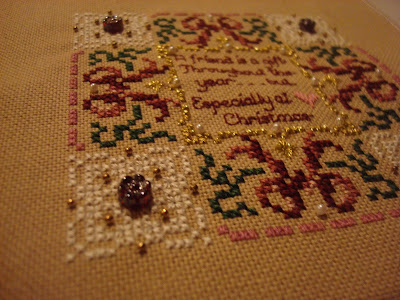 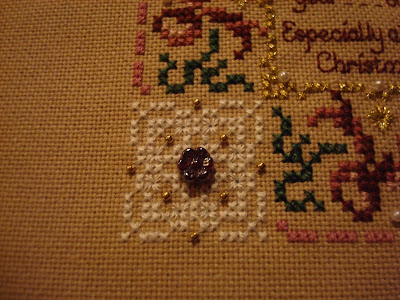 This chart was a gift from Mouse.  I filed it with my "smalls" to be part of the Stitch Maynia in 2018 but for some reason added it to the "Christmas" section of my Just Nan spreadsheet rather than the "Smalls".  So when Mouse sent me the embellishment pack some time later I couldn't find the chart.  Because I was looking for it in my Christmas bag.  Then, when I picked it up last September, I couldn't find where I had put the embellishment pack!  Luckily I found it this year when I was looking for some fabric Mouse had also sent me...  The two were reunited at last!  Which is good because those floral centre things are expensive and hard to find.

Finally, I will be running the Secret Stitching Sweetheart Blog Hop on Valentine's Day. 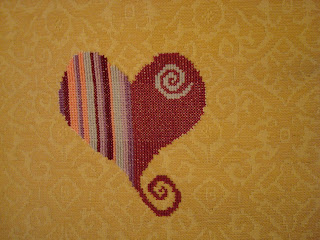 It's really very simple, all you have to do is email me a picture of something you have stitched which is suitable for a stitching friend on Valentine's Day.  It could be a heart, or a pair of cute creatures, or the word "love" or anything which warms your heart.  Really anything you think a fellow stitcher would like to receive in her email Inbox.    It can be something you've stitched in the past or something you've made especially for this year.  It could also be quilted or sewn this year as I know some of my followers do other crafts too.

Send me the email by 10th February.

When I have all the emails I will randomise them and send one to each participant on 13th February. Then on 14th February you must post the picture you receive onto your blog under the heading

There will be a list on my blog of everyone joining in, so check out all the blogs and find out who got your picture and identify yourself in their comments as their


Does that make sense to everyone? I hope so!


If you'd like to be involved then leave a comment or send me an email if you are "no-reply". I'll be putting little reminders up from time to time and will email on 9th February to make sure you send the pic in time.

Hi Jo, please add me to your blog hop list. I have been watching for a few years, and thought I should join in with all the fun.

You are always so very thrifty with your ORTs and stitch so beautifully.

What a lovely little design!

Wow you're stitching up that first Alice block really fast!

Loving the JN, such a sweet verse, its fabulous.

I had no idea that TUSAL is still running! Love your stitching. I'm joining in on the Valentines blog hop. Off to email you.

Please include me in the Valentine Blog Hop, Jo. Thank you.

Jo: Just nan designs are so pretty, yes the beads for her designs are not cheap.
Alice is such a sweet design, I am looking forward to seeing it done.

Beautiful stitch Jo. I like it very much. I will send you a photo for sure. RJ

Alice looks good and will look even better with the backstitch! Love your Christmas finish. Thankfully, the non-evenness isn't too bad in that one.

I can't tell that the square has been elongated, even with a lot of staring. It's a beautiful piece. I presume Alice is one of your favourite books or things to stitch? I'm looking forward to seeing this one grow x

Beautiful progress and fantastic finish! Glad the pieces were reunited at last. I enjoy stitching on 32ct with 1 thread. Looks delicate that way. Hope you like it too.

You did a beautiful job on the Just Nan Christmas project.

Hi Jo, I am in for the Secret Stitching Sweetheart! Kisses, my friend.