That's what's been going on round here lately!  As well as RRs flying around and a lovely giveaway prize (which I haven't photographed yet) there were the Birthdays.

I stitched two cards for two lovely Birthday bloggers.  The first one went to Chiara the Grey Tail (actually the grey tail is her cat!) in Italy.  The card grew wings and flew there in only two days.

When Chiara saw my card for Kell, "We're not old, we're Retro" she laughed and commented that "my best friends says we won't get old, we'll get vintage.. ;)"  Strangely enough I'd been planning that as my next card so I offered to send it to Chiara for her birthday "providing it's not in the next ten days as it won't get there in time".  Turns out Chiara's birthday was actually twelve days later!!  But she didn't mind me being fashionably late. 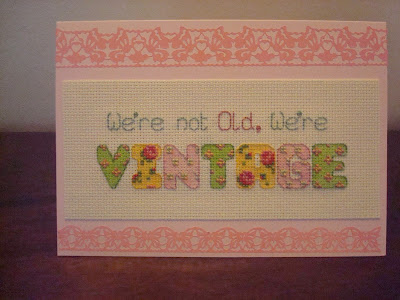 I stitched this in my usual backstitch and felt pens technique.  But this time I did the backstitch, then the background colouring, then stitched the floral motifs in the letters.  It makes a nice 3D effect.  The lace ribbon is a sticker which came with a box intended for my Toddler Group craft table but I decided it was too nice delicate for 2 year olds and kept it!

The second card is the next one in the WOCS Flower of the Year series, October Marigold.  This went to the hilarious Shirlee the Easily Influenced Stitcher.  Shirlee is in my Top Two Funniest Bloggers list along with Stewie from the Spinster Stitcher.  I won't say who is Numero Uno as the other might be offended LOL. 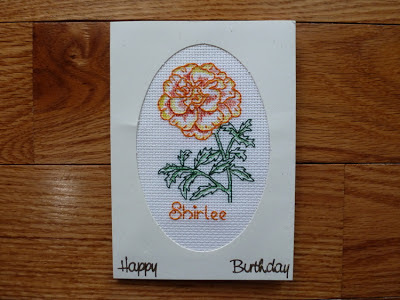 I've nabbed Shirlee's photo because mine came out blurry (camera on the wrong setting?).

I made another new Hallowe'en start this week, Just Nan Frightful. 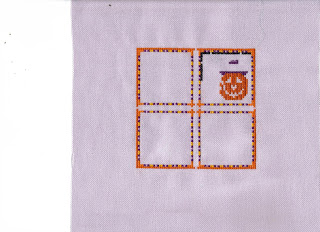 This is stitched on 28count lilac Britney evenweave using the recommended DMC except for the black.  I thought I'd try the Sullivans using 2 over 2.  It covers quite nicely in the border and didn't knot as much as using 1 over 1.  But when I stitched the bat motif it was no better than DMC for coverage so it'll be three strands for the motifs then.

I must share the new blog Faith Hope and Charity I found today while looking at another new blog (Hello Sewphie!).  This is not a pure stitching blog  but she does do craft, she also does sarcasm and satire on a grand scale!  Check out this linked post about Hallowe'en fancy dress then go to the Ebay tab.  I challenge you not to laugh out loud and fall off your chair!

Finally, the Hallowe'en Blog Hops sign up is closed, I'm emailing the participants next then you'll have to wait until the 31st to join in with the Mystery Phrase Blog Hop Hunt.

Love those cards! Thanks for the thread info! LOL at the ebay thing! Her Pinterest thing was funny too!

Those cards are amazing, and I love you new Halloween start.

As usual, the cards are amazing! Love your ideas. Thanks for the update on the Sullivans - I have a skein of black around here somewhere and was wondering if it was worth trying. And thank you for the link to Faith, Hope and Charity - it was a good thing I wasn't drinking while reading or my 'puter would be a bit damp right now.

you are a sweetheart for making these lovely cards for your blogging friends - thankyou for bringing happiness into the world, i am sure you lifted these ladys hearts and brightened their day - sweet gifts for sure.

It's a good thing you have finishes all the time, lol! I love your felt pen technique for cards! This one came out especially lovely with the 3D effect!

I suppose that was why I'm not so troubled by Sullivans -- I almost always try to stitch two over because I need to start with the loop method to keep my sanity (what sanity~?) in place, hah.

Great cards Jo, and I'm still laughing at that blog you sent me over to

Great 'vintage' card, love the look of that. How spooky her birthday was in 12 days, couldnt have timed that better.

oooo love that card and spookily very close to her birthday ...

thanks for the link will go and have a peek .. sorry for not joining in the hop but my one piece I did didn't arrive until it was too late for you *sigh be more prepared next year ..lol
love mouse xxxx

Fantastic cards, and love the vintage one! Perfect!

Great cards! And nice start on the JN.

Chiara's card is awesome! I have to say that now when it's my birthday!!! Love Shirlee's too! I love your cards Jo :D

Love those cards, Jo, especially the Vintage one. The colors are fantastic. :D