A Final Happy Dance for 2012 and some International Mail

The final Happy Dance for 2012 is the Star SAL from Periphaeria.  I became aware of this one about halfway through on Mouse's blog and just had to join in.  I also filched the colour scheme from Mouse, she used purples on another sampler and they looked so good I had to steal!
The fabric is Purpleberry Spludge from Sparklies, gorgeous name for a gorgeous fabric.  It's a 28count evenweave which I stitched over 1.  I've used Purple 333 and Yellow 973 throughout but the purple looks lighter when there's only one row of stitches, on the alphabet and the bottom symbol. 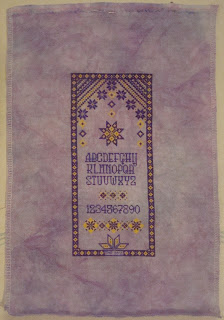 Here's a closer pic with my scissors for scale: 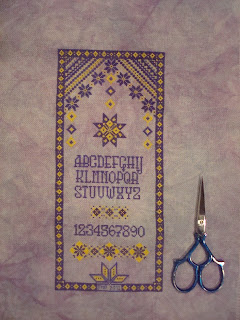 I'm going to get an A4 frame to show off the fabric.  After payday, so it'll be a little while!
ps all that border over 1 was interminable!  The centre stitched up very quickly but the border went on and on and on and on.....
The International Mail part of this post refers to the three packages I received today.  Yes, three international parcels, Hubby and the postman must think I am an international jewel thief or something!
The first one is a prize from Shirlee of Farmhouse Ponderings.  She had a Giveaway and I got a runners-up prize of these cute pins.  Sweet, aren't they?﻿  I haven't used pins before but I'm sure I'll find a good way next year. 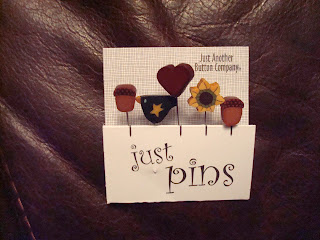 The second package came all the way from Cucki-land.  Isn't it just so sweet and Cucki-like?  I saw a post on her blog where she said she loved material bags.  The bookshop where I work has a nice selection including one with a Quentin Blake design on I thought she'd like.  When I bought it I found a donation from the sale goes to a Book Charity in Africa which seemed appropriate.  So off it went to South Africa with some bookplates which match a picture on her blog.  I have had the bookplates since 2 surnames ago and had a few left.  They have a Maloo style cat looking at a pile of books! 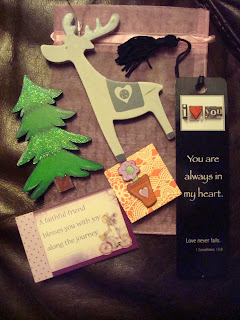 What a lovely selection of cards, bookmarks, wooden ornaments and a little letter.  The only thing that gave me a fright was the black tassle.  Why?  Well you imagine opening a letter from South Africa and the first thing you see is something black moving!!   It's a very small African Spider was my first thought!!  Luckily it wasn't.
The final package was some threads from Janie (no blog).  She's a friend from the Yuku boards who loves Joan Elliott.  Unfortunately it is difficult to get the UK magazines where she lives so I sent her the recent pullout chart of the Madonna and Child design and she sent me some DMC in exchange.  Bearing in mind that DMC costs 90p a skein in the shops here or 40-65p online this was a good deal for us both! 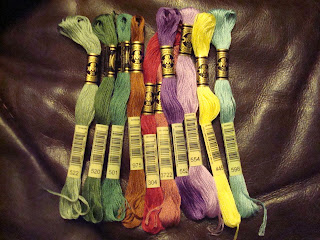 I just had to include the photo as the colours look so lovely together!  I don't want to put them in my floss bags just yet, they really need to be stitched into a sampler first!  I didn't ask for any particular colour because I have less than one skein of any colour so anything is a bonus frankly!
And finally, when I went to Sparklies' website to get the link, I saw that she's having a New Year Sale on 1st January for 24 hours GMT only.  So get over there if you want 20% off her lovely fabrics.
Posted by Jo who can't think of a clever nickname at 19:46

Beautiful finish! Really like the color combination. And the DMC together is really pretty. Janie did a very nice job.

Your finish is beautiful. Well done, all that stitching over one is not easy. Lovely gifts as well especially The Just Pins.

Wishing you and your loved ones a very happy New Year, may it bring you gifts of joy, health and happiness and lots of stitching time for you.

Ooh that purple fabric is divine!! I love the design you stitched! It's so tiny! what lovely gifts you received! I love that you thought the tassel was a spider!! I would've too!!

ooooo fame ..lol and love the finish .. mmmm give me a nudge every so oft to get mine finished will you ..lol and lovely wins you got :) wishing you a wonderful ,healthy and happy stitchy new year :) love mouse xxxx

Great gifts!! What a lovely way to end the year :D
Congrats on your finish, so pretty :)

what a lovely finish and what great gifts you recieved all the best for 2012 and have a happy stitchy year.

Beautiful finish Jo and great gifts, I did have a little giggle at the thought of you leaping away from the tassel spider!
Off to check out/bookmark sparklies now

The fabric you used and color used are really pretty!

Awesome finish to end the stitching year! I'm in love with the colours <3 Wishing you happy and stitch-y New 2012!

Your "Star" is beautiful and the linen is just gorgeous! What nice gifts you received from Cucki, all the way from Africa, and Janie's threads are such beautiful colours too. OOOOOOH.....I must check out Sparkles' website for her New Year's Sale!