Measi of Measi's Musings is worried the World is ending in 2012 so has decided to try get some of her WIPS finished before then.  Because, of course, unfinished needlework will see St. Peter turn you away at the Pearly Gates to be doomed to spend eternity in the perfect LNS with no needles.

Here's the link to join in with the WIPocalypse: WIPocalypse.  The rules are great, very open to your individual interpretation, the important one is to post every New Moon with a picture of of WIP in order to be entered into the end of year draw (if we're all still here, otherwise you'll get your prize in the afterlife).

On this gloomy subject, I do wonder what will happen to my stash when I'm no longer here.  The finished items are no problem, there are loads of people who would want them but only a fellow needleworker would appreciate all the unstarted stuff.  I think I'll put a bit in my will to say you guys get first dibs on my stash when I go!  An enormous stitch-in wake would be good too...

On a happier note, Violarium is having a September magazine giveaway here.  Violarium is where I ordered the Nimue charts from, they were very speedy with their delivery and included half a dozen freebie charts from various designers which was a nice surprise.

I haven't got any new pictures, the cover kit from Cross Stitcher is stitched but not framed because of the rubbish cards included, I've emailed to ask for some replacements.  The Margaret Sherry from WOCS is nearly finished, just the bs.  I've stitched "K is for Kelpie" and will show-and-tell when I've stitched "L".

So here's a random picture from the archives: 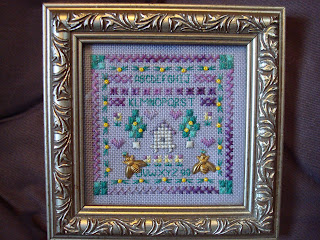 Stitched from Needlework magazine in 1999.  Cute isn't it?
Although I need to move that bee's bottom to the left!
Finally, I have found a nice online Ebay store which sells Tibetan silver charms ideal for my growing Just Nan collection.  Some are available in mixed bags (Hallowe'en) but others come in packs of 10 the same.  But at 99p for 10 I can't complain.  So if I buy 10 the same I'll be passing the spares onto you guys.  My Giveaway thoughts are progressing.  I have a main prize, and some ideas for bits to go with it, only 3 more followers or 17 days and we'll be there!
Posted by Jo who can't think of a clever nickname at 14:58

hello dear, i love your stitching so much..i also think sometime when i will die what will happen to my stash..i think my ghost will be very upset..if something ahppen to them he he he
hugs cucki xx

I love the idea of a stitch-in wake! I've already told the Hubs that any stash should be donated first to the local EGA than whatever's left goes to the Senior Recreation program our county runs. Oh course, he'll probably have a yard sale and sell it all for $1. You've got smoking needles keeping up with the alphabet - I've only managed to keep up with the printing of the charts. Very cute finish - love how well the fiber works with the fabric color.

ROFL at your first paragraph!!!!

The have barely a handful of WIPs, but it'll be fun!! :D

I've joined the WIPocalypse too, it's too easy to resists (I'm *always* working on WIPS, lol!)