I've started 2 new birth pictures this week, one for my friend's new daughter and one for my great-niece due any minute.

The first is a Nimue design, The Baby Swing.   It's soooooooooo cute I had to have it.  The baby is fairly non-gender specific so it would have been okay for either gender.   The fabric is a 32 count Murano from Crafty Kitten, dyed specially for me.  I wanted a greeny-yellow that had the effect of sunlight though trees.  The chart photo was a plain dark green.
My scanner has decided only to scan the middle of the fabric with the stitching on so it looks very long and thin!

OK.  Now Blogger won't load photos.  How annoying is that?  Also I can only leave comments on blogs where the "follow" button is on the side, not when it's it the top margin thingy!

The second design you can't see is a Passione Ricamo freebie, Fairy Celebration.  I decided to go with the majority and stitch her in white.  It looks lovely and does indeed "pop".  If I was doing it for myself I'd have gone with the tone-on-tone scheme but as it's for my niece and her DD white it is.  I hope it's a DD, she's had a few scans as baby was breech but has luckily turned the correct way up. 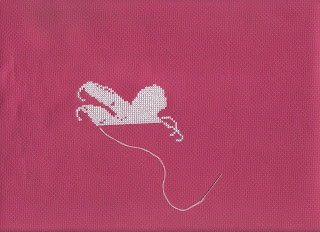 I finished E is for EEK! this week as well.  What a nice little block that was, full of Hallowe'en motifs and a nice simple Ermine Stitch for the grass.  Even if I did do the straight line on top instead of underneath the diagonals! 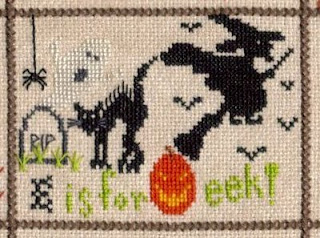 I will post now and try add the photos as a later time.  In the meantime, here are the links to my Yuku album so you can at least look at them there!

Yay!  The photo adder is working again!  Sun 29th May
Posted by Jo who can't think of a clever nickname at 14:01

Lovely stitching, Jo! I love Eek so much!

Which editor are you using? If you haven't changed to the "new" updated editor...you might give it a try. It seems to help with any photo issues.

Great going, Jo - E for Eek is smashing, and that baby elf's face is so sweet.

Love your new starts, that baby is so cute!
And well done on your Eeek finish, this one is my favourite block so far and think I might have to stitch it myself to make into an ornie at some point.