A Haunting We Will Go

was the Mystery Phrase for this year's Hallowe'en Trick or Treat Blog Hop.

A big Thank You to everyone who posted a letter and well done to all who followed the Hop around and discovered the Mystery Phrase.  I like to think it was a little bit easier this year!

Christine even came up with a little song for us:

As you know I completed Nora Corbett's Raven on the final day of October which then left me with that "Post-Finish Indecision" which you get when you've been focused on one piece for a little while.

I wasn't really sure what to stitch next.  So I started my Christmas Ornament for this month, another Dragon Dreams and then spent a day beading last month's Ornament. 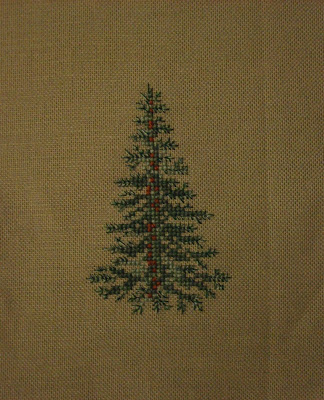 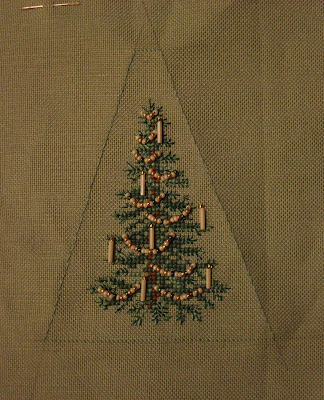 I used the bugle beads I bought to make little candles with a gold bead flame and then strung some random Mill Hill beads left over from a kit to make the garlands.  There is a mixture of white, green and gold beads. 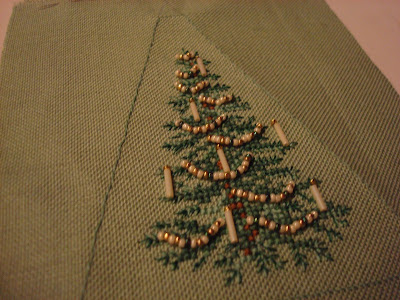 I also FFO'd it that same day but will save that photo for Rachel's FFO Gallery on the 10th.

I completed the Jessica Savage Word of the Month: 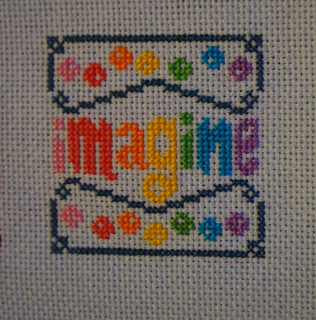 The three words so far:

I have started the fourth word now.  I also discovered the perfect way to finish these.  I don't know how many will be in the series which makes it hard to plan a layout.  I decided to stitch them in a 3 x 3 block and see how that went.  If there were 10 in the series I'd make them into smalls instead.  But with my inspired finishing idea I don't need to worry about how many there are.  I'll save that for Rachel's FFO Gallery too!

Thanks to work (paid and vountary) I have actually had three days of stitching my "travel" project which is Mirabilia's 25th Anniversary Cameo design. 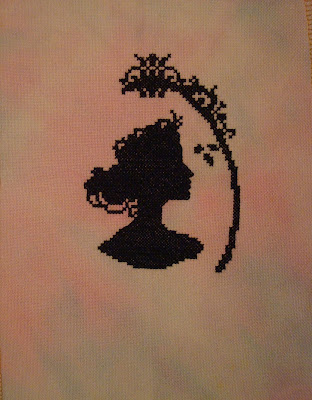 
Finally I did some tea-dyeing today.  We had a packet of teabags in the staff room at work which were well out of date so I brought some home to dye fabric.  Two pieces here, both 28 count evenweave, which took the colour in totally different ways.  One was a pale blue to start with and came out a gingerbread colour.  The other was more grey and came out a more classic neutral shade. 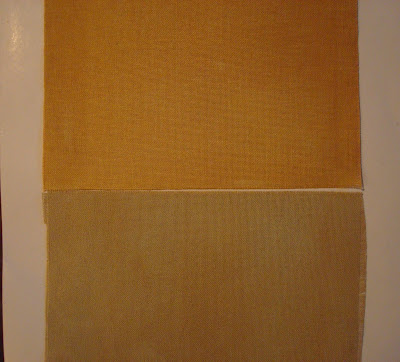 Posted by Jo who can't think of a clever nickname at 21:03

What a difference the beads made on your tree. Love how you made the candles. I really like the words. Those would be cute done up for one of the little one's rooms. Interesting color differences on your tea-dyed pieces but very pretty. I tried my hand at dyeing fabric a few weeks ago and love the results; unfortunately, when I photograph them, no matter the light, they look splotchy and awful.

He He He. I'm a published poet!!!
I love the effect of the beads on your tree ornament. Also I'm intrigued to find out more about your finishing idea for the words

I had a great time on the blog hop Jo! Thanks. In my jumbled up and no more vacancy brain, I couldn't get the phrase but it was fun looking at everyone's Halloween stitching. The Christmas tree certainly came to life after beading it, very pretty. I'm sure your FFO of the words will be ingenious!

Congrats on the great finishes Jo. The tree is awesome. Love the fabric.

Your Christmas tree is so fabulous Jo!

Your Christmas tree is so beautiful. The candle like beads really made the design!! Very interesting about the tea dying.

Oh, your tree is SO lovely, Jo! What a difference the beads make...

I need to try tea dying myself--I have several pieces of random fabrics that could use some sprucing up :)

The blog hop was a lot of fun as always. Love the touches with the beads on the Christmas tree. Perfect. Love the colors in imagine and the other two words. We all need these reminders. Great work on the cameo design. Lovely the way the fabrics turned out.

Oooh, that little tree is so pretty with its garlands and candles! And I do love imagine with the rainbow of colours.

The Christmas tree ornament is sweet. I've used the beads for candles in the past, its so effective isn't it?
Nice dyeing.

Lovely progress from your fingers this week! The beads look amazing, replicating traditional candles and garlands, and the cameo's definitely looking ornate now. Looking forward to seeing your idea for the words, although it must be frustrating not knowing how many there are likely to be in the set. Wonder what you have planned.....?! :)

Nice Christmas tree, love the decoration!
The cameo is very pretty!
Nice tea dyeing, wouldn’t have expected the first colour!
I wonder how the colour will last!
Hugs,
Barbara xx

That phrase reminds me of We're going on a bear hunt" AriadnefromGreece!