I keep making mental notes of things I see around t'internet and thinking "I must tell people about that", so here are a few of them.

Now, I'm annoyed because I kept this post in my reader especially to share and it's gone!  It was someone who'd visited a house which had rooms decorated with the most amazing button collection.  If that was you or you remember whose blog it was PLEASE tell me!

Edit to add:  It was Ellen's blog post here.  Ellen herself recognised it as did two other kind people.  Good job some people have better memories than me!!


The second thing is a new blogger in town, Yana Hanim.  She left a comment on my blog so off I hopped to return the following (as I do with all my new followers, probably why my Reader is choc-a-block full!).  This is how she describes herself:

"An Indonesian wife to a Turkish husband, a full time mum of two children. Graduated in water quality management from an agricultural university in Indonesia, worked in a national park in westernmost tip of Java island, studied park tourism management in New Zealand. After our glorious student life in Lincoln (Selwyn District) and Hornby (Christchurch) ended, we lived in Konya (Turkey), Aleppo (Syrian Arab Republic), and now Amman (The Hashemite Kingdom of Jordan). I need to work on my Turkish (kolay gelsin!) and start to learn Arabic (Insha Allah)."

If that doesn't make you want to read more then I don't know what will!  How about this quote "I almost couldn't get this clock because bombs exploded in Aleppo just a day before I was going to collect it."

I hope that Yana doesn't mind me quoting from her blog but I think she sounds fascinating and deserves to have lots of lovely followers.  I'm really looking forward to reading more and seeing more of her stitching. 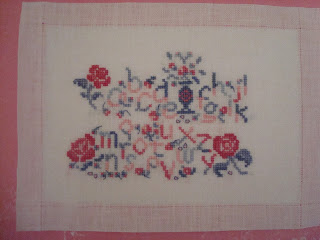 This comes from Vavi's blog - Voyage sur Toile.  It was released as a 4 part SAL.  I stitched it on 40count linen over 2.  The original design was a long thin one but I changed it into a rectangle by stitching parts 3 and 4 underneath parts 1 and 2 instead of alongside.  On reflection I think it would have looked better as a long thin design.  Which is why Vavi is a successful designer and I'm not!  But I still like it and have scrapbooked it for my collection. 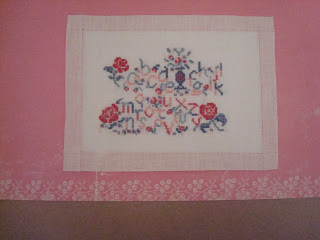 I do like the way I mounted this one.  I stuck the fabric onto a piece of plain white paper then I removed one thread all the way round 20 threads in on each side.  Then I stuck the paper to the pink mount.  You can see the pink through the edges of the fabric but not the middle so the stitching stands out.  Simple but effective.

Banu Demirel is a Turkish designer, this is her original website which apparently has had problems in Turkey so she will be releasing her SALs via Facebook.  Just what I need - another SAL!

Finally, don't forget my giveaway of your choice of one of Yiota's Cross Stitch Kits.  Draw will take place after 31st May.
Posted by Jo who can't think of a clever nickname at 22:49

Congrats on your finish sweetie :)

I love your finish too! Congrats :)

Your finish is lovely! Thanks for introducing us to Yana ... I will go pay her a visit now : )

Jo, was it my visit to the Button House?

Love the alphabet and it looks as though it was meant to be that way. Very nice....

The Button house is from With My Needle by Ellen Chester! Hope that helps!! I will go check out those blogs! Love how you mounted Vavi's piece. It sure is pretty!

I believe this is the post you're refering to?

I love the way you've mounted it. It stands out beautifully

That is lovely Jo

I like your version of the SAL, yes, i did join it and have it printed of...have i started it yet... errr nope! Stitcing mojo AWOL with the nice weather.

Lovely, lovely! I really enjoyed reading your posts Jo. Tho I don't always leave comments, I do read your blog regularly.

That looks lovely and the pink mat mount is just genius! The letters turned out great, what a cool combination of colors. Congrats on a great finish!

I love your finish, I think it looks stunning the way you have stitched it and you don't give yourself enough credit!

Thank you for introducing us to new blogs, I love finding new people to meet and learn about!

Awww Jo, how nice of you :) I click ur new post on my blog list without knowing I would find my name here. I am a bit embarassed but grateful too, I hope I could get new friends this way (and I got some already, I was surprised when I saw new 10 followers today).

A wonderful finish =)
Thanks for sharing those links, I will surely take a look =)