May's Theme is Memory May, the idea being to stitch something which holds memories for you.  I don't really have anything in my stitching schedule which fits that so I've decided to go for Making Memories.

I have to stitch the Joan Elliott Round Robin because there is a mailing deadline so what little evening stitching time has been dedicated to that one.  Why do I have so little evening stitching time?  Because the Small Boy has randomly decided that his nice bedtime routine of bath, story, song and snuggle down to sleep is no longer good enough for him.  He prefers bath, run around like a loon, lose control of his higher functions, run around and fall over alot, snuggle up to one of us and fall asleep between 10 and 11pm.  So very little stitching time in the evening for me. :-(

The theme for this one is Fairies and I've chosen the Butterfly Fairy from the cover of Joan's latest book - Fairy Enchantment.  This is a lovely book but the charts are quite different to her others.  The symbols are not the usual ones and are harder to follow.  They are unnecessarily complicated mini-drawings (a yin-yang, a fan with a line under it etc).  Also the backstitch lines are quite thick which obscures the symbol underneath.

I received an email from Christine today to say that her prize finally arrived!  A mere 6 days to cross the country.  I've had stuff reach America quicker than that!  Here's what I made her for being the Most Commenty Commenter earlier this year: 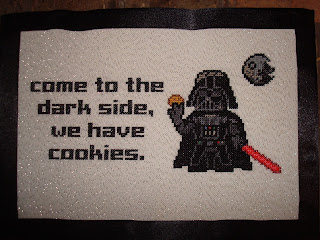 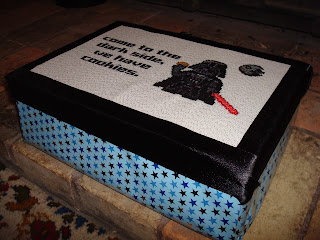 This is a freebie chart available from Dorkstitch.  Inside the box are two packets of cookies.  Not just any cookies but M&S cookies!  I hope Christine gets to eat at least some of the cookies before her children devour them all.

The design was stitched on 28count evenweave with a nice silver sparkle in it.  I used three strands of black DMC for Darth himself and two strands for everything else.  I think 3 strands on 28 is the only way to get the coverage.  I also used metallic red round the light sabre.  I stuck the fabric to the lid of the box (using double-sided tape) then edged it with some black ribbon.

Finally, only two more followers needed for my 250 Giveaway sponsored by Yiota.  If you want a chance to win one of her cross stitch kits then drag your friends along to my blog!

Posted by Jo who can't think of a clever nickname at 20:18

I love the cookie box - deliciously wicked. Good luck with the small boy - one day he will turn into a teenager who is out all night and sleeps all day - oh joy!

Too funny! I'm stitching Butterfly Fairy on Michelle's just as you're stitching it on mine! Love it! (Yes, the symbols are a pain.)

I must stitch the Darth Vader for the Boy-child.

I love your Darth cookie box! A great idea for a finish :o)

Oh small children.... I missed that bit and went straight to the teenagers! Not sure what is worse though?!? Good luck :o)

I love my Cookie box! (The cookies are currently hidden)
Have you tried lavender oil in Small Boy's bath? Lush make a wonderful lavender ballistic

Made me laugh reading about your little man, remembering DS being the same and hes 23 now. :)

Such a cute box! You must get lots of stitching done during the daytime then. I am lucky my toddler still likes to go to bed by 7.30. He's a loon just before though. It's interesting to read about how complicated symbols can be tricky to read - a good thing to remember.

Oooh, I love that box! Thanks for the link to the chart - I actually know that site, but hadn't gone that far back exploring it. Nice start on the Fairy.

OH, that box is awesome!!! Sorry you are having to chase a little guy around instead of relaxing in the evenings! Hopefully he'll get back on track soon.

What an adorable box Jo. It turned out great. The Butterfly Fairy is going to be really pretty.

Fabulous gift for Christine, so perfect for her.
Oh no, nothing worse than mayhem at bedtime,I hope this phase passes fast for you and you can relax in the evenings.
Nice new start for the RR