Do You Do Voodoo Too?

I'd gotten a little behind with The Dark Alphabet, partly because of stitching on the Joan Elliott Round Robin and partly because Julie is banging out the letters this year!!

So I'll be putting the hours into it this month to try catch up.  V was for Voodoo and as usual The Note of Friendship blog is full of information about the letter and plenty of useful links if you want to know more. 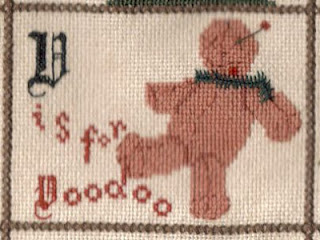 This wasn't the most exciting block to stitch, the lettering was great but the little figure got a bit tedious!  When I stitch over 1 in rows I get a ridge between every other line, which is great for some of the pieces but for this one I stitched diagonal rows which made it a little more interesting.  I dangled the carrot of "Wyvern" to get me through it.  I'm using a variegated for Wyvern and it's so much more fun!

The green scarf is stitched in the Van Dyke Stitch, quite fiddly over 1 but a nice little effect.

The next piece is my current daytime project, Cherry Hill by CCN.  This was a giveaway from Crafty Rahenna and I'm loving it.  I'm using DMC on 40 count Newcastle linen, over 2, a mixture of 2 strands or 1 strand depending on the effect needed.  I'm using two different variegateds for the green and there'll be a variegated red coming soon. 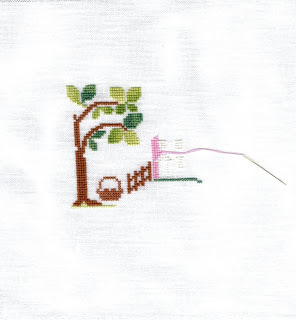 Not a brilliant pic because I'm using my scanner.  It's quicker and easier than using the camera for WIPS.
The third project is my alphabet sampler for my friend's new baby boy.  I shifted the letters around to include his name... 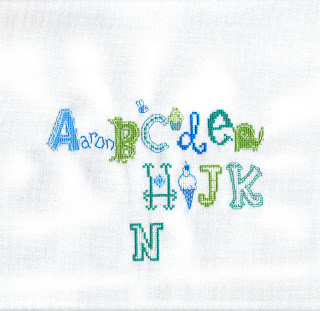 I'm so pleased with the wobbly lower case letters!  I charted them myself on a piece of graph paper and they looked a little upright and straight so I kind of free-styled them on the fabric.  I'll be adding Big Sis's name further down.  This chart was published in Cross Stitcher magazine this year.

There's also a charting project called "I Blame Karen" after Stitchy Woman.  She makes these throwaway comments on stitching forums which set my mind ticking and before I know where I am, I'm surrounded by pieces of sketch paper, graph paper, charts and being accused of being a "Manus-o-phile".  Non-Latin speakers will have to wait to see if this ever comes to anything other than an in-joke and a moment of madness on paper.

Finally, the Easter Treasure Hunt was a HUGE success, it was so much fun blog-hopping to see the letters.  There was only one Picture Poster who couldn't make it, she was away for the weekend but everyone managed to guess the missing letter!!  I'll keep the entries secret until the Friday deadline just in case anyone is behind in their blog-reading.  I used the Easter weekend to catch up on mine, I only have today's posts outstanding and have been commenting all over the place which I love to do.
Posted by Jo who can't think of a clever nickname at 23:19

They all look great! I especially love the alphabet sampler. :)

I'm so proud to be the blame-taker/ inspiration for your latest project. I'm glad I threw away that particular comment. I'm looking forward to seeing some of the stitches as they go in. Tee hee hee!

Great work, its all looking great. I like the job you did on the letters, looks like they were there to begin with. :)

Everything looks great! That V square is a hoot : )

Wow - you have so many cool projects going on. I am really impressed with the alphabet and you did a fabulous job on the small letters - they really look a part of the piece!
I can see why the voodoo doll was boring to stitch, but it does look awesome! You deserve a treat after that one! Chocolate, coffee, new stash - doesn't matter, you earned it! :-)

The alphabet sampler is great. I like the way you have yr own littel something to it as usual

love the alphabet sampler, I don't remeber it looking half as nice in wocs, fabulous job. xx

I love the voodoo block! That says something about me, doesn't it?
Great start on the Cherry Tree Hill, and the alphabet birth sampler is looking lovely

Love the voodoo block! And great WIPs - you were very clever with the added lettering.

The birth sampler is looking great.
Cherry Tree Hill is growing nicely too.
Blog reading catch up happening here too, amazing how many pop up when you are away for a few days then have the easter hols too .... must read faster lol

The voodoo doll is actually creeping me out. But you did a great job on it! Can't wait to see Wyvern!

Great job on the voodoo doll! I will have to take a peek at the Easter Egg hunt post and see what the answer is!

Great stitching on everything. I do like the voodoo doll - I am still amazed that you're doing it over-1! Cherry Hill is turning out very nicely, I like the idea of different thread counts in one project. Very cute idea for the baby sampler and you did a great job charting out the lower case letters.

Oh, now I have the David Bowie's voodoo-baby-magic-dance song in my head! I love this piece, it's looking great! The name sampler is really cool too!
Nah, you got me thinking about the manus-o-phile. My Latin is just what we were thought for med uses, so I can only translate manus as hand... hmm "lover of doing things by hand"?That's kind of a long shot ! XD

I love the colors on the alphabet sampler :)

Great WIPs. This alphabet looks really great - what an idea to have voodoo for the letter V. Never seen before.

Great progress and finishes on all your stitching.

Oh, I love the Voodoo that you do - great stitchy progress.

What a great job on all your sticheries. Love how you added the wonky letters...they look so great! Wishing you a wonderful weekend! Hugs Mary