Here's the round-up for the progress since the last Full Moon.

1. No progress on Green Goddess.  But she will come back for Amazon April.

2. Completed "U" on the Dark Alphabet, started "V" for Voodoo.

3. Stitched a couple of days on My Lovely Sewing Tools, and joined the new blog "The Stitching Gift" to display my progress.  Gillie has set up this blog so we can post our WIPS and completed projects from the magazine so everyone can see them as well as the members of the Yahoo Group.  Every poster is including the issue the design appeared in so if you want you can go and buy the relevant back issue.  These will be on sale for the foreseeable future.  I used my subs money to get all of 2010 so now I have 12 back issues to read through and drool over the designs! 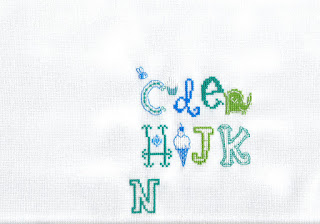 This is a nice quick stitch, I can do one or two letters each evening.  I'm planning on adding baby's name and his big sister's name next to their relevant letter which will involve a little tweaking of the design.  I've moved the elephant over to save 3 squares and will move the apple too when I come to it.
Part 2 - Just Nan-a-thon

Started "Dewdrop" a little Easter rabbit.  Rather different to all the samplers in my collection.  Picture to follow.

For March Madness I planned to stitch as many different designers as fit in my schedule and managed 12!!  Not too shabby for a former OAATer.  See this post for all the pics.

As the Full Moon rises earlier each month there will be less and less on the 2nd month's Theme.  In other words I haven't stitched anything Amazon for April yet!

I also finished my block for Jacqui's Joan Elliott Round Robin: 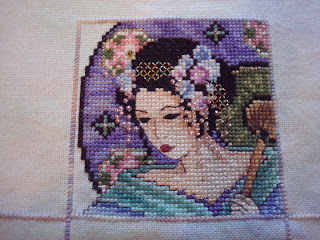 Angled shot to show the beads: 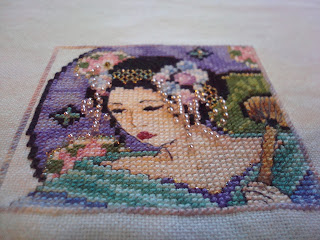 Close-up to show the single bead of a different colour.  I decided to buy a whole pack rather than subbing on the grounds that it is sure to be needed later on in this RR.  Or I might stitch the whole lady one day and there are plenty needed in the rest of the design. 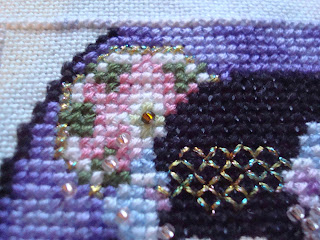 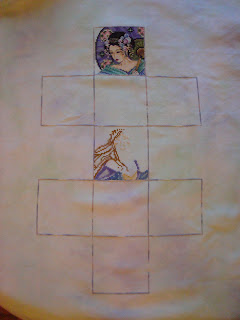 Jacqui's theme is "Your Favourite JE design".
I love Joan's Oriental pictures and thought it would make a nice change to stitch one for this piece.  The design came from Cross Stitch Collection magazine issue 186.  Also in the RR are two fairies, one fantasy, one Xmas and one small fairies plus my Flower Fairies where I stitched the centre piece of all six flowers.
Recently while I've been stitching I've been listening to audio books from the library.  Most appropriately, this week's choice was Empress Orchid by Anchee Min read by Pik-Sen Lim.  Audio books are great for stitching time as they are much less distracting than the TV.  They also keep my mind on something other than worrying about the world!  Plus I'll be helping my local library which is still under threat of closure despite increasing their lendings this last year.
Finally, watch out for the Easter Treasure Hunt this Sunday.  I have 14 Picture Posters taking part and there will be a prize for one lucky person who finds the Mystery Phrase!
Posted by Jo who can't think of a clever nickname at 19:41

Great progress Jo! Love the JE SAL and your stitching is beautiful as always.

You've been busy again. The RR looks wonderful.
I've read Empress Orchid, it is quite harrowing in parts isn't it?
Looking forward to the treasure hunt

Lovely stitching.The RR is going to be so pretty and I like your baby sampler.
Happy Easter.

That are a lot of beads, she is looking splendid!!

oh, I LOVE your sqaure for the JE RR. Lobe the sparkle form the beads and the metalics :D

Stunning block, such great colours, this is going to be a fabulous RR