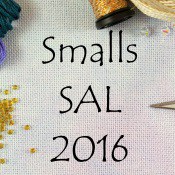 The Smalls SAL is hosted by Heather from Stitching Lotus

This year I have two Small Challenges:

For the Hallowe'en Blog I have done something a little different this year, I've chosen a band sampler by Just Nan called Counting Bats and each band corresponds to the monthly themes on the blog.  May's theme was Spiders and I stitched this band: 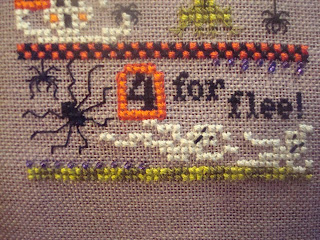 That is one giant spider!  I am not surprised the ghosts are fleeing.

Here is the whole piece with my special scissors and fob: 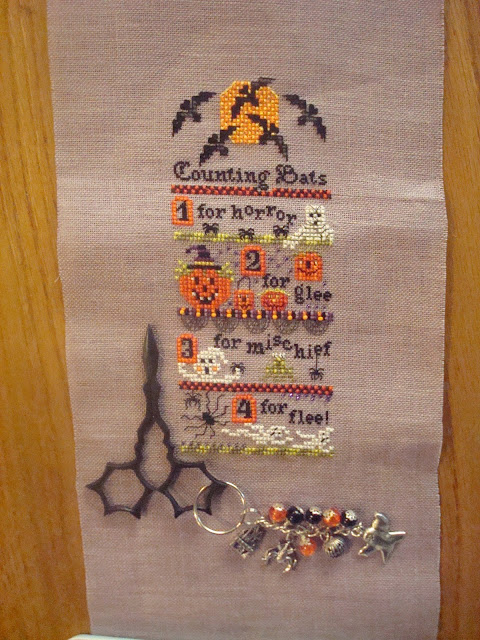 The theme on the Christmas Ornie SAL blog was Reindeer and I decided to stitch one of Daffycat's cute little reindeer freebies.  In the event, I stitched three of them!  Jinglebell, Holly and Mistletoe. 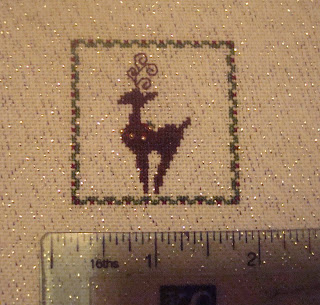 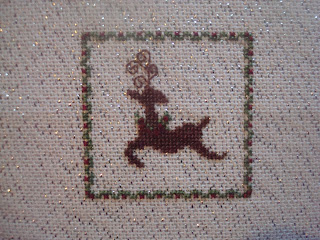 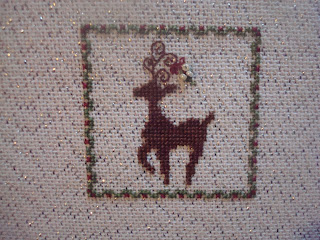 I also completed another Small, this time as part of the Stitch Maynia Colour-a-Day SAL, which was Red. 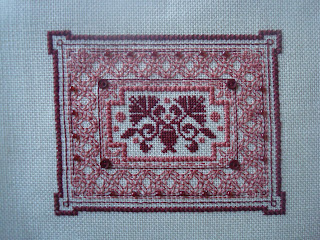 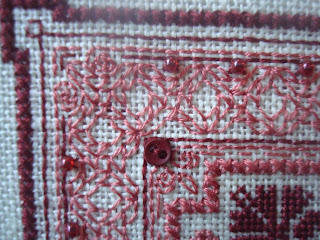 This was a gift from Vickie so I will be sending it back out into the world as part of June's Gifted Gorgeousness post.  So keep your eyes open then!  I used the charted DMC 902 for the darker red and substituted 3722 for the charted 3726 which looked too brown to me.  I also used standard size beads instead of the charted petite.  The standard beads filled the spaces much better than the petites.  Plus I had them in my stash and didn't have the petites!

Having completed that piece I needed something simple to start straightaway and chose the second in a series called Winter Woods by The Little Stitcher.  Only a couple of evenings bathtime stitching and a lunchbreak at work and it was done: 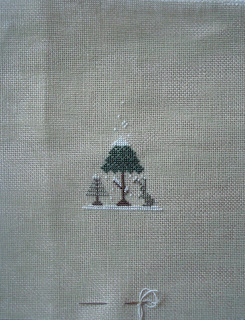 stitched over one on 32 count Vintage Grain linen

Here is the previous piece in this series: 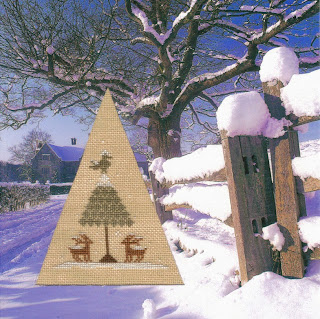 There is one more and I'll scrapbook them together.

I almost forgot my other Small! Inspired by our host Heather, I stitched on the Teresa Wentzler Byzantine Ornaments too.  I used burgundy fabric and changed the colours too: 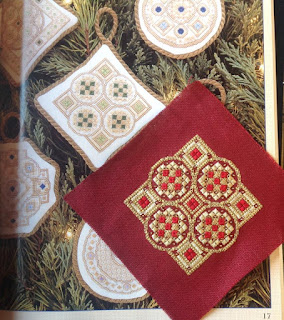 Finally, in my last post I showed a picture of Just Nan's Haunted Pumpkins Tree and said I couldn't remember what happened to it.  I found it!  In a sensible place, surprisingly.  I had put the finished piece into the bag with the chart and put them back into my Just Nan bag.  There are a LOT of charts in that bag.  Maybe I'll pull out a JN small to start tonight.

Posted by Jo who can't think of a clever nickname at 19:38

Congrats on all of the adorable finishes Jo. I don't have time to do any finishes, I'm to busy doing starts. lol

Beautiful new finishes and thanks for the link the The Little Stitcher!

I love Counting Bats. 😀 And your Christmas stitching is so tiny! And so cute!

The red design is lovely. You chose really great colors!

Oh what BEAUTIFUL stitching you have shared again with us!!! I love all that you have blogged about today for the Smalls posting!!! Great job!!!

Lovely smalls!! I liked your special scissor and the fob :)

Love all your smalls! Good job!

Beautiful stitching as always Jo, I'd be fleeing from that spider too and I'm chief spider catcher in our house! Lovely winter and Christmas stitching. Daffycat's reindeer are lovely. I stitched a couple last year.

Love all your smalls finishes!

Love your update, so in love with the reindeer!

Another Etsy shop to visit - It's a wonderful thing. Those little reindeer too. Thanks for sharing - Stopped by your Scrapbook page - So amazing.

Your needle has been flying! I have to admit the little reindeer have caught my heart, but all the others are lovely too - even the bats.

So many lovely smalls! Happy stitching!

So many lovely pieces....

You certainly have been busy! I love that giant spider.

Wow, you are so productive! Everything is wonderful! I especially love your Halloween band sampler! Can't wait to see the completion.

Great progress the bats piece is really coming along!

These smalls are just wonderful. I love the ghosts fleeing from the giant spider, and yes, giant it is, lol. Just this morning I read a blog post where someone was talking about a giant spider coming out of her project bag. In the future I will be careful when rummaging through my project boxes, lol.

Wow, you had quite a bit to show this time! Those little reindeer are just so cute, and so is the winter woods one. Great progress, I'm surious to see what you will pick next!

Love them all, especially the reindeer on the sparkly fabric! Great job.