I've been having a little framing session this weekend.  I inherited some needlework pictures from my Great Aunt via my Mum.  Great-Aunt Daisy passed away nearly 25 years ago with no children so her precious things were inherited by my Grandad (her brother) and my other Great Aunt.  They were then passed onto the nieces, nephews and great nieces/nephews.  I already have a cute set of playing cards in a leather case, a lovely brooch and now these two pictures which were stitched in the late 1930s. 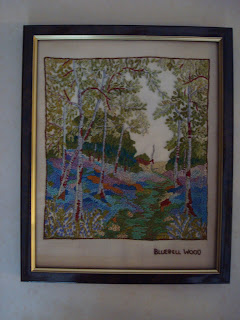 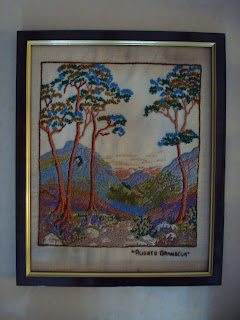 I reframed them but did not attempt to clean them.  I was too worried I would make more of a mess!  The edges are the dirtiest but the stitching is quite clean and the colours are still true and fairly unfaded compared to the back.  The stitches are a mixture of straight stitch, satin stitch, lazy daisy and loads of french knots.

They are now hanging in my bedroom.  BTW my brother and I decided if the collective term for brother/sisters is siblings then the term for nieces/nephews is niblings.

The next framed piece is a kit I bought many years ago and decided to stitch as a birth sampler during my last pregnancy convinced I was expecting a girl.  The small boy appeared, and not so small at 9lbs 14.5oz!!  So I finished it off with our initials and it's now hanging in the lounge while Celtic Christmas is having a rest after 12 years of display.  This was great fun to stitch, I love all the little rooms. 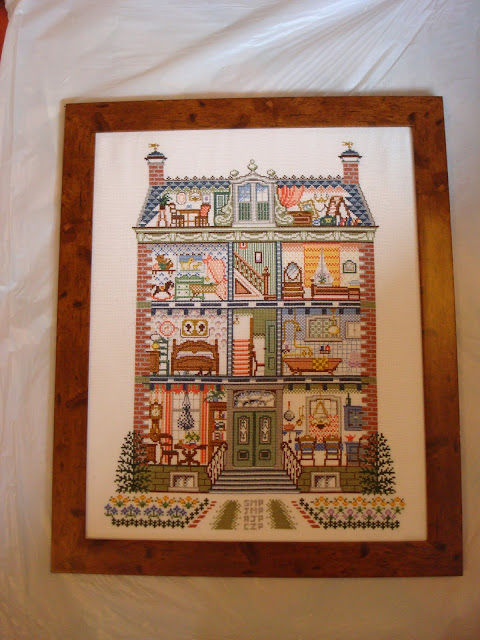 After that I finished off a Joan Elliot flower in a pot to match the previous JE flower in a pot.  The frames were cover gifts from Cross Stitch Collection mag but I didn't like the pictures suggested so stitched these two JE designs from the free WOCS booklet - the best free gift EVER. 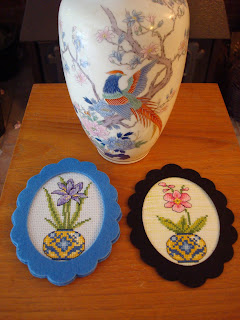 In the evenings I've been stitching a RR from the WWRR Yuku board, my first ever RR.  I sent my piece off and thanks for the Canadian postal strike it took 2 weeks to get there, while mine arrived from Australia in less than 1.  It's very nerve-wracking stitching on someone else's piece especially as this one has been round the world once already and has some gorgeous work on it.

The theme for the RR is Band Samplers and this one is all Teresa Wentzler designs.  Sophia has sent some borders for ideas but luckily I have two books of TW designs already and have chosen a great one (I think).  I have been super careful to railroad every stitch, every end is tucked in extra neatly, frogged threads thrown away and NOT reused, my hands are scrubbed clean and the small boy is not allowed within 20 feet of it!  Being a TW design there are 4 different blended colours already and I've only stitched 4 rows and some background lines!

The WIPS on my stash chest were Bluebeard's Mermaid (the blue fabric was a BIG clue) and the Dark Alphabet (you could just see the chart under it).  Congrats to Mouse for getting one point!
Posted by Jo who can't think of a clever nickname at 14:07

Wow that is lovely that you have kept them, I have seen many large samplers at car boots, it is a shame that they are no longer loved!

Oh I do love the dolls house, one day I will hopefully do one like it!

I always think it is such a shame when projects end up in the car boots, it's great to see you have kept and still love these old pieces.

What lovely heirlooms.
I love the dolls house. No chance of stitching that for my two either ,both were boys and I have two grandsons now lol. The flowers in pots are very pretty.

wow I love the old pieces

ooo very nice having those old samplers and you did right not to wash them too ..... and woo hooo I scored a point ..lol love that dols house picture in fact I know someone who would love that one :) good luck with the TW design RR too :) love mouse xxxx

How lovely that you still love the family pieces. I hope that you can pass them down to someone who will love them too!! Love your little house with all the rooms. It's cute! Everything looks good, lol.

It's wonderful that you have some stitched history in your home. I have a pillow case my Grandmother embroidered and I treasure it.

The little house is really cute.

Those are lovely stitched pieces by your aunt, how thoughtful of you to keep them and take care of them. And I loooove your doll house!

Wow Jo they are all fantastic. Beautiful heirlooms! And the dollhouse looks like it would have been fun to stitch. It's gorgeous and really sweet.

wauw, what great pieces, I can totally understand you treasure them !

Keeper of the Crowes said...

Hi Jo,
Actually, Cathy, my needwork shop owner, suggested it to me. It's a play on my last name which is "Crowe". I think she and my stitching friends see me as the "keeper" of all things crow because they know I love stitching anything with a black bird in the design. Being my friends, they've made it their duty to find each and every design with a crow or back bird in it! They've done an excellent job because not only have I've stitched many designs, there are even more being "kept" in my stash. On a personal note, I enjoy taking care of all the "Crowes" who live with me! Thank you for taking time to read and comment on my blog. It means so much to me. Hope to share more pictures with you soon!
Linda

Your great-aunts pieces are beautiful. The colors are still so vibrant after all these years.

Love your sampler.... it's so cute and quaint. It took me awhile to find the initials cos I kept looking for them in the rooms..... duh!!! LOL.

How lucky you are to inherit such lovely pieces!! I don't think anyone in my ancestry stitched! Love the dollhouse, what a perfect place for all your initials!

The Dolls House has had so many good comments I feel a giveaway coming on....

I am happy to hear that the pieces from your family have survived. Its such a blessing to have something so personal to pass along. Your doll house is gorgeous. What a wonderful idea for a birth sampler.