Finally, I have finished the Cherry Blossom Flower Fairy that was the cover kit with WOCS 176.  I have moaned so much about this kit elsewhere!  The threads were a nightmare to sort, so many shades of brown, beige and cream.  I had to compare and contrast with my DMC stash to get them all right in the end.

I made a couple of changes in the backstitch, grey for the wings and red for her dress.  I also coloured the aida in before I started stitching using a nice pale pink felt tip pen.  Then I backed her with pink card which gives a lovely pink hue to the fabric.  I shall experiment more with colouring aida scraps when I do some card making as it seems to work quite well. 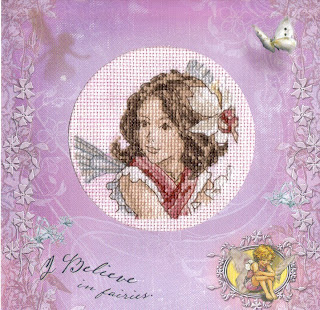 The mount came free with the magazine, they actually charged people an extra £1 this issue but as a subscriber we get it all for the same price which is nice.

Sarah-Beth is having a needlebook exchange and one of the joining-in conditions is to tell her your first finish.  So I rummaged through the cupboard in the small boy's room and found a box of my early work.  These two are my first ever finishes, I can't remember which was the very first, they are like twins!  As you can see they are beautifully framed in click-frames - no expense spared!  If I find a space for them I will reframe in something much nicer. 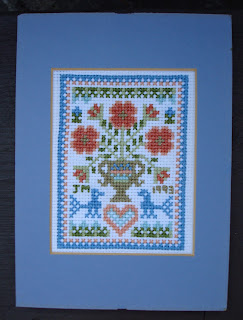 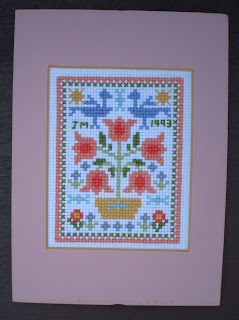 ﻿
Actually, you can't see the click-frames cos I took the glass off to photograph them!﻿  I think they are DMC own brand and I did the blue one first because I prefer it now.  Has anyone else got pictures of their very first finish?  Leave a comment and put a link to the picture.

I took a few more photos this afternoon and uploaded them onto Picasa.  My online photo album is a little scary now, there are 85 photos in the pre-2011 album alone!  And that doesn't include all the projects I've given away.  I have my 20 year anniversary in 2 years time, wouldn't it be great if I could achieve 200 projects by then!  I have photos of over 100 so far, all I need is a list of the finished but not photographed and I could see how many I need to stitch by the end of 2013.
Posted by Jo who can't think of a clever nickname at 23:52

Awesome pics. I will go find my first and post it too.Thanks so much.

It was framed but had started to spot - obviously wasn't a needlework specialist that framed it :( Not sure what to do with it now. Might turn it into a cushion.

Oooh, my first finish. A little fridge magnet I think, or was it the butterfly I sticthed? Both were done while I was at school in the early 90s! Your first 2 finishes look lovely.

oooo my first finish I did was a piece I made for my mum 20+ years ago and I designed a mouse sat reading a book onto a pattern of a horse shoe and flowers .. I have a photo of it somewhere in the house .. love mouse xxxx

Love these first finishes stories. Jo has reminded me that techically my first finish was in Year 2 at Primary School (age 7) when I stitched a mat on Binca for my Mum. It had a house in the middle and several nice borders. She probably still has it. It used to be on top of the TV with a photo on it but they have a flat screen now!
Freddy's Mama - that was quite a complicated first stitch!

What a cute fairy! Yikes, my first finish is an almost 40-year old butterfly and it's hanging in my kitchen - I'll have to blog about it sometime :-)

Your first finishes look great! Yes I have a picture of my first finish. It is teddy bear sitting on a china cabinet with blue and white china inside, a lace doily and a quilt over the back of a chair beside the cabinet. I stitched it for my biological mother as she asked me to the second time I met her when she realized I was learning to stitch. Sadly she never got to see the finished version as she passed away the day before I was to make the trip to bring it to her, but it is buried with her. There is a picture here:
http://raven-stitches.blogspot.com/2010/04/by-request-sort-of.html